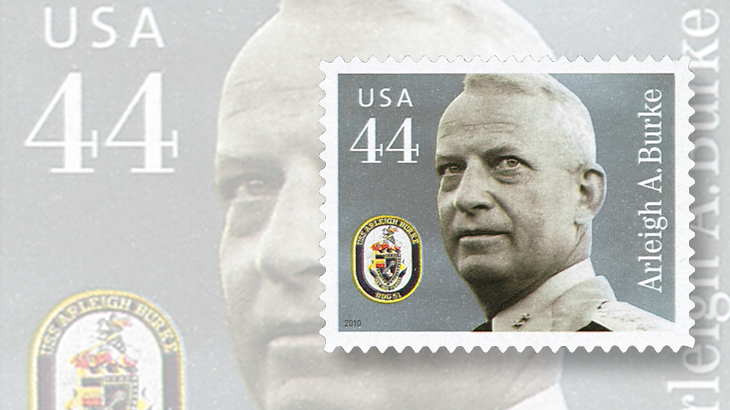 This 44¢ commemorative stamp issued in 2010 honors Admiral Arleigh A. Burke, who served in the Navy for 42 years, including six years as chief of Naval operations.

Arleigh A. Burke, who was born in Boulder, Colo., on Oct. 19, 1901, was a United States Navy officer who served as a destroyer squadron commander during World War II and a cruiser division commander and truce negotiator during the Korean War.

In 1955 he was promoted to four-star admiral and appointed chief of Naval operations, a position he fulfilled until his retirement on Aug. 1, 1961, after 42 years of service with the Navy.

Burke attended the United States Naval Academy at Annapolis, Md., graduating in 1923, and he earned a master’s degree in chemical engineering at the University of Michigan in 1931.

His service in the South Pacific during World War II included the battles of Empress Augusta Bay and Cape St. George, and a promotion to chief of staff of the fast carrier task force under Admiral Marc Mitscher. After the war, Burke commanded the USS Huntington for one year.

The Arleigh Burke class of guided missile destoyers are named for the admiral, and the first ship of this class, commissioned in 1991, was christened the USS Arleigh Burke (DDG 51).