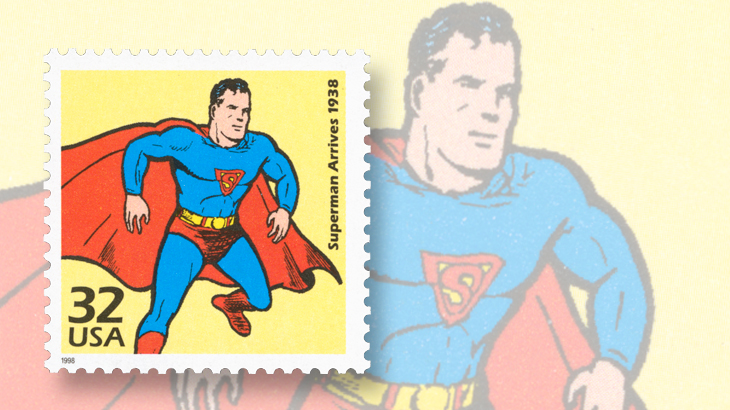 Jerry Siegel, who was the co-creator of the Superman character (with friend Joe Shuster), is named in the printed inscription on the back of this 32¢ stamp from 1998.

Jerry Siegel and Joe Shuster were partners in the creation of the world’s best-known comic book superhero, Superman.

The first United States stamp to feature the image of Superman appeared in the 1930s set of the Celebrate the Century series, which was issued Sept. 10, 1998. The 32¢ stamp (Scott 3185f) shows a very early incarnation of the Man of Steel, the character developed by Siegel and Shuster in the 1930s.

On the back of the stamp is a printed inscription: “Created by Jerry Siegel and Joe Shuster, Superman first appeared in 1938. The Man of Steel was the world’s first comic book super hero. His sensational powers and dynamic deeds changed forever the content and style of the comic book.”

Jerome “Jerry” Siegel was born Oct. 17, 1914, in Cleveland, Ohio, and met his collaborator, Shuster, while both were still high school students. Their early story efforts found publication in comics of the mid-1930s, but the pair spent four years looking for a home for their Superman.

Siegel had dreamed up the story of Superman and his alter ego, mild-mannered reporter Clark Kent; Shuster, the artist, brought it to life.

Detective Comics (later DC) finally accepted the character and put Siegel and Shuster under contract, but because the young men quickly signed away the rights to the character, they lost out on royalties as the superhero achieved an enormous international following.

Siegel worked for other comic publishers over the years, but never came close to matching the incredible fame of Superman. He died Jan. 28, 1996, four years after Joe Shuster.

Superman has appeared on additional U.S. stamps over the years, and on stamps from Canada and Jersey.