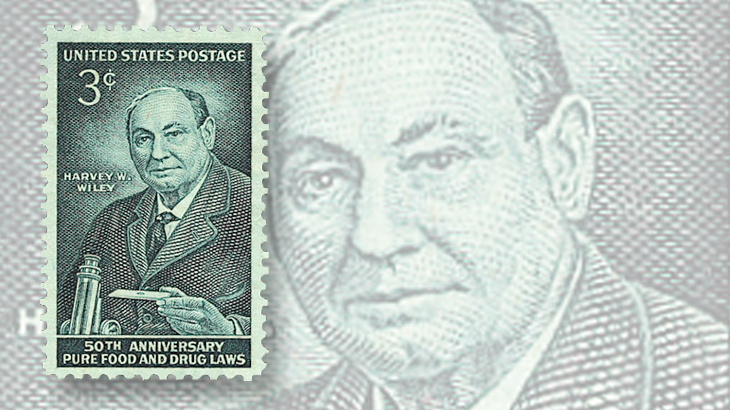 The 3¢ stamp from 1956 commemorating the 50th anniversary of the Pure Food and Drug Act shows scientist Harvey W. Wiley, who helped craft the new law.

His role in creating the law to safeguard American consumers was so significant that when the United States Post Office Department commemorated the passage of the Act on its 50th anniversary in 1956 (Scott 1080), the central design simply showed a portrait of Wiley with his microscope.

Harvey Wiley was already a Civil War veteran when he graduated from Hanover College in 1867. Four years later, after studying at Indiana Medical College, he earned his M.D., and then pursued additional studies at Harvard University to earn a B.S. degree in 1873.

He taught chemistry at Purdue University before accepting the position of chief chemist for the U.S. Department of Agriculture.

In 1902, Wiley assembled a test group of healthy men dubbed “the poison squad” to consume materials used in food processing, for a clinical study of the effects.

Wiley worked with Congress and helped to write the Pure Food and Drug Act, also known as the Wiley Act, which President Theodore Roosevelt signed into law.

After resigning his position, Wiley worked at Good Housekeeping laboratories for 18 years, further alerting consumers to dangers in foods, falsehoods in food labeling, and efforts to swindle Americans with quack cures.

Wiley died June 30, 1930, and is buried at Arlington National Cemetery.