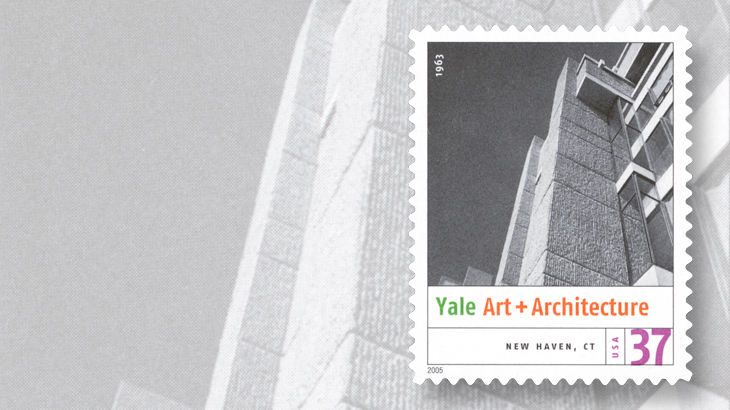 The Yale Art and Architecture building, designed by architect Paul Rudolph, was featured on a 37¢ stamp in 2005.

The Masterworks of Modern American Architecture commemorative set issued May 19, 2005, comprises 12 different 37¢ stamps that each show a black and white detail photograph of a specific building.

One stamp from the set (Scott 3910i) pictures the Yale Art and Architecture building in New Haven, Conn., designed by Paul Rudolph. It is, perhaps, his best known structure. The building was renamed Paul Rudolph Hall in 2008 following restoration efforts and the construction of an addition.

Paul Marvin Rudolph was born Oct. 23, 1918, in Elkton, Ky., but grew up in Alabama, where he graduated from Alabama Polytechnic Institute (known today as Auburn University)

His further studies at Harvard Graduate School of Design were interrupted during World War II as he served in the U.S. Navy, supervising ship construction at Brooklyn Naval Yard.

During his lifetime, Rudolph achieved great acclaim for his architectural style, which often featured bold and complex exteriors created from unifying elements.

The Yale Art and Architecture building, dedicated in 1963, consists of 37 different levels on nine floors, and was completed while Rudolph was chairman of the Department of Architecture at Yale.

He designed numerous buildings in Asia during the 1970s and 1980s, including the Lippo Centre in Hong Kong, and Wisma Dharmsala Sakti office tower (later known as Intiland Tower) in Jakarta, Indonesia.

Rudolph died Aug. 8, 1997, in New York City. A printed inscription on the back of the liner paper for the 37¢ Yale Art and Architecture stamp reads:

"This sold, textured structure of concrete was completed in 1963. Large Skylights illuminate the dramatic main interior space, overlooked by mezzanines and bridges. Architect Paul Rudolph intended his bold urban building 'to excite and challenge the occupants.'"