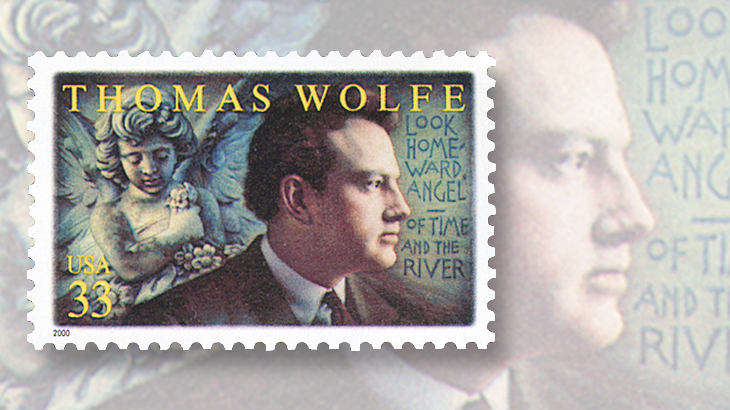 American novelist Thomas Wolfe was born Oct. 3, 1900, in Asheville, N.C., the youngest of the eight children of William Oliver Wolfe, a successful tombstone cutter, and Julia Wolfe, a former teacher who operated a boarding house.

Wolfe obtained his master’s degree at Harvard, and as he sought unsuccessfully to secure backing to produce his dramatic works, he taught English at the Washington Square College of New York University.

While returning from a visit to Europe in 1925, Wolfe met and fell in love with Aline Bernstein, a married New York stage designer many years his senior.

With aid from Bernstein, Wolfe was able to quit teaching and focus his energy on writing.

The massive raw manuscript for his first novel caught the attention of Scribner editor Maxwell E. Perkins in 1928.

Look Homeward, Angel, was published the following year after Perkins and Wolfe worked together to bring form to the huge work. The novel secured the author great acclaim around the world for its dramatic portrayal of American life.

The sequel, Of Time and the River (1935), was also well received, though less exuberantly than the first work.

Wolfe was diagnosed with severe tubercular meningitis following a West Coast trip in 1938, and he died Sept. 1, 1938, at age 37. After his death, two more novels were edited from his written pages: The Web and the Rock (published in 1939), and You Can’t Go Home Again (1940).

During his lifetime Wolfe also published short stories and novellas.

A 33¢ commemorative stamp honoring Thomas Wolfe (Scott 3444) was issued Oct. 3, 2000, on the author’s birth centenary. It is the 17th issue in the United States Postal Service’s Literary Arts series.