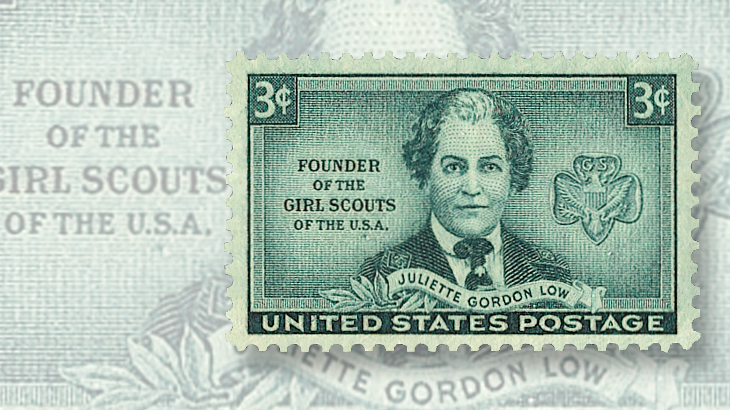 Juliette Gordon Low, the founder of the Girl Scouts of the USA, was honored on a 3¢ commemorative stamp issued Oct. 29, 1948.

The founder of the Girl Scouts of the United States of America, Juliette Gordon Low, was born Oct. 31, 1860, in Savannah, Ga.

Her full name was Juliette Magill Kinzie Gordon, but the adventurous and enthusiastic girl was usually called “Daisy.”

Ear injuries at a young age resulted in a significant hearing loss that Low contended with for most of her adult life.

Married in 1886, she traveled to England regularly, and it was there that she met with Sir Robert Baden-Powell, the famous founder of the Boy Scouts.

Returning to the United States, she organized a similar group for girls, and convened the first meeting at her Savannah home on March 12, 1912.

The Girl Scouts of the USA history recalls that “From that first gathering of a small troop of 18 culturally and ethnically diverse girls, Juliette broke the conventions of the time — reaching across class, cultural, and ethnic boundaries to ensure all girls, including those with so-called disabilities, had a place to grow and develop their leadership skills.”

Juliette Gordon Low died Jan. 17, 1927. A stamp honoring her was issued just two days before her birthdate on Oct. 29, 1948 (Scott 974). Low is shown in her Girl Scouts uniform, with the Girl Scouts emblem on the right side of the design. The stamp was issued in Savannah.