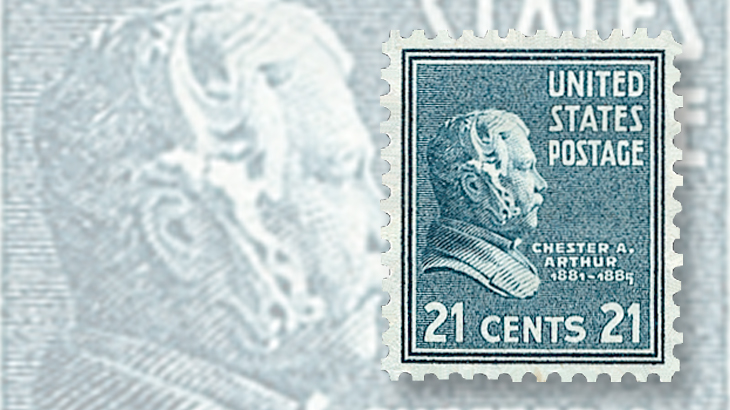 The first stamp to honor President Chester A. Arthur was the 21¢ issue in the 1938 Presidential series.

America’s 21st president, Chester A. Arthur, was born in Fairfield, Vt., on Oct. 5, 1829. As the nation’s vice president under James A. Garfield, he became president after Garfield was shot by the assassin Charles J. Guiteau on July 2, 1881, and died on Sept. 19.

Arthur attended Union College, graduating in 1848, and would teach school for a number of years before studying law in New York. He was admitted to the bar in 1854 and joined a New York law firm.

During the Civil War, Arthur was quartermaster general for New York with the rank of brigadier general, but the Republican lost the position in 1863 when a Democrat was elected governor and had him replaced.

Arthur returned to his law practice but remained involved in Republican politics. He was appointed Collector of the Port of New York by President Ulysses S. Grant in 1871, and though he had never held elected office, he was selected for the Republican ticket in 1880.

Arthur sought reform of the civil service system and supported the passage of the 1883 Pendleton Act, which began the transformation to eliminate the “spoils system” that rewarded political supporters with lucrative government positions. Though Arthur had benefited himself from such an appointment years earlier, he bucked a faction of his own party to improve the government system.

Arthur also lowered tariff rates and enacted a new immigration law. During his presidency he learned that he was suffering from a kidney disease that was taking a toll on his general health. He remained open to being nominated for the 1884 election, but the Republicans chose James G. Blaine, who lost in the general election to the Democratic candidate, Grover Cleveland.