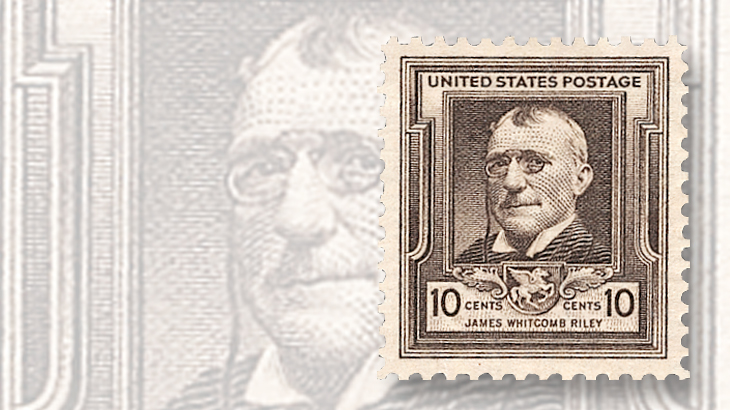 A 10¢ honoring poet and author James Whitcomb Riley was issued Feb. 24, 1940, in the Famous Americans series.

James Whitcomb Riley, known as “the Hoosier Poet,” was born Oct. 7, 1853, in Greenfield, Ind. Over the course of his lifetime, Riley wrote some 1,000 poems, many in an exaggerated dialect that reflected his rural Midwestern roots and gentle humor.

As a young man Riley aspired to be an actor, but he traveled as a commercial painter before turning to writing. Newspapers began publishing his poems, and before long he was working on the staff of an Indiana newspaper. He then submitted a poem titled Leonanie to another paper, intentionally written to mimic the style of Edgar Allan Poe (whose date of death, it so happened, was Riley’s date of birth).

He successfully perpetrated a hoax that the poem was, in fact, a lost Poe composition, but once his act was found out, he was fired from his job at the newspaper. Before long, however, he acquired a new post with the Indianapolis Journal.

Though he called Indiana home, Riley’s growing popularity as a poet took him across the country for speaking engagements and poetry readings. His first volume of verse, The Ole Swimmin Hole and ‘Leven More Poems, was published in 1883.

Riley dedicated some of his work to younger readers, and gained fame as “the Children’s Poet.” Among his most famous creations was Little Orphant Annie in 1885, with its repeated refrain of, “An’ the Gobble-uns’ll git you ef you don’t watch out!” The title of the poem was appropriated four decades later by Harold Gray for his popular comic-strip character, Little Orphan Annie.

Riley’s first book of children’s poems was a best-seller, further expanding his fame. His national popularity and his frequent speaking engagements made Riley a wealthy man.

In his later years, Riley was a mentor for a number of young American writers, including Edgar Lee Masters and Paul Laurence Dunbar. Riley suffered a stroke in 1910 that paralyzed his right side, and he found he could no longer write. He died shortly after suffering a second stroke in 1916.

A 10¢ stamp honoring James Whitcomb Riley was issued Feb. 24, 1940, in the Famous Americans series, with a first-day ceremony in Greenfield (Scott 868).