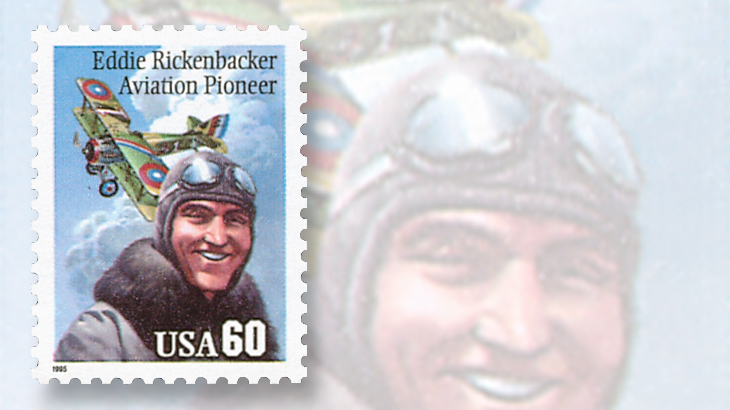 Eddie Vernon Rickenbacker was the most celebrated United States air ace in World War I, accumulating victories over 22 enemy planes and four balloons.

Rickenbacker’s interest in flight began at a young age. Born in Columbus, Ohio, on Oct. 8, 1890, he once sought flight by affixing canvas wings to a bicycle and careening down the roof of a barn. Though his contraption was demolished, Rickenbacker survived the disaster, an amazing ability that would follow him through his future careers as a race car driver and Army pilot.

In 1905, Rickenbacker began to work at the Frayer-Miller auto plant in Columbus, where he developed his passion for cars. As a representative for Firestone-Columbus in 1912, he began racing as a career, eventually becoming one of the top-ranked drivers in the United States.

Known both for his skill and his daring, Rickenbacker was involved in several wrecks, though he was not seriously injured.

Rickenbacker entered the Army in 1917 and was assigned as a driver for Col. William “Billy” Mitchell in France. With Mitchell’s help, Rickenbacker was assigned to flight training and began active duty with the 94th Aero Pursuit Squadron.

As a first lieutenant, Rickenbacker was a disciplined and methodical flyer, but his courage and ability made him legendary. His achievements during the war led to his becoming commander of the 94th Squadron and eventually receiving the Medal of Honor.

After the war Rickenbacker joined the Cadillac Motor Car Co., and then Eastern Airlines, where he became president of the company in 1938.

Eddie Rickenbacker died of heart failure July 23, 1973, in Zurich, Switzerland, while on a journey to see the place where his parents had been born.