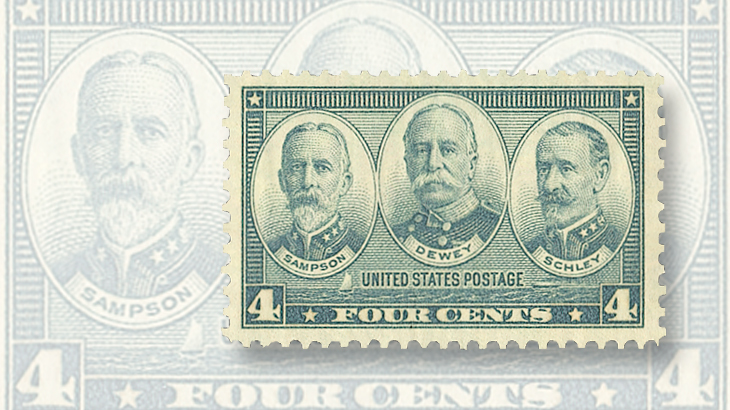 Admiral Winfield S. Schley is shown in the portrait oval at right on this 4¢ U.S. Navy commemorative issued in 1937.

Admiral Winfield Scott Schley, born near Frederick, Md., on Oct. 9, 1839, was honored on March 23, 1937, when his portrait was included with those of Admirals William T. Sampson and George Dewey on a gray 4¢ stamp paying tribute to heroes of the United States Navy (Scott 793), and in particular, prominent leaders during the Spanish-American War.

Schley graduated from the U.S. Naval Academy in 1860 and served during the Civil War with the West Gulf blockading squadron, reaching the rank of lieutenant in 1862.

After the war, he served as a Naval Academy instructor before fulfilling assignments to the Chincha Islands off the coast of Peru, and to El Salvador, Korea and the Arctic.

He was among the 33 founders of the National Geographic Society in 1888. Ten years later, he was promoted to commodore, and took command of the Flying Squadron in the 1898 Battle of Santiago in the Spanish-American War, after which he was promoted to rear admiral. He died Oct. 2, 1911, and is buried at Arlington National Cemetery.