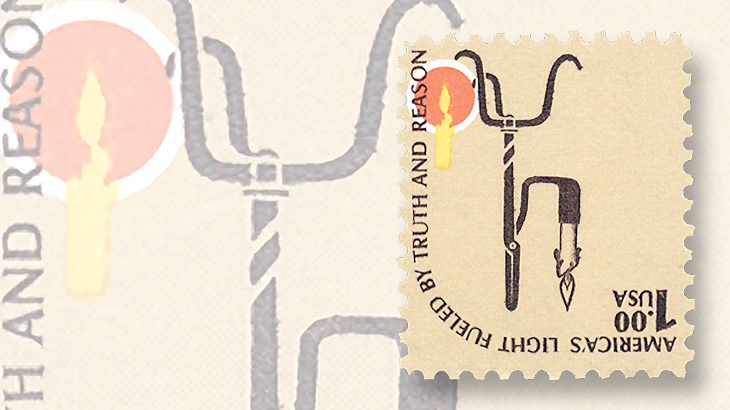 One of the most famous modern United States error stamps, the upside-down $1 Rush Lamp and Candle Holder known as the CIA invert, brought $26,450 at the Cherrystone sale. 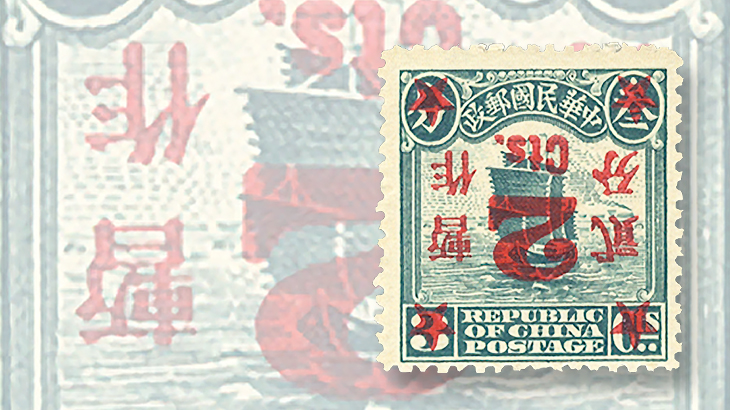 A 1922 3¢ definitive stamp of China with an inverted 2¢ surcharge, one of perhaps a dozen examples known, brought $149,500 at Cherrystone’s auction in September. 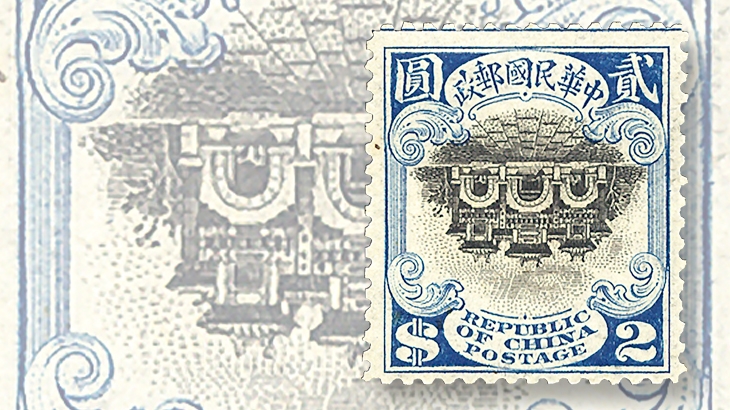 Only some 30 examples exist of this Chinese definitive stamp with inverted vignette. Cherrystone offered this lightly hinged example at auction in September; it sold for $115,000. 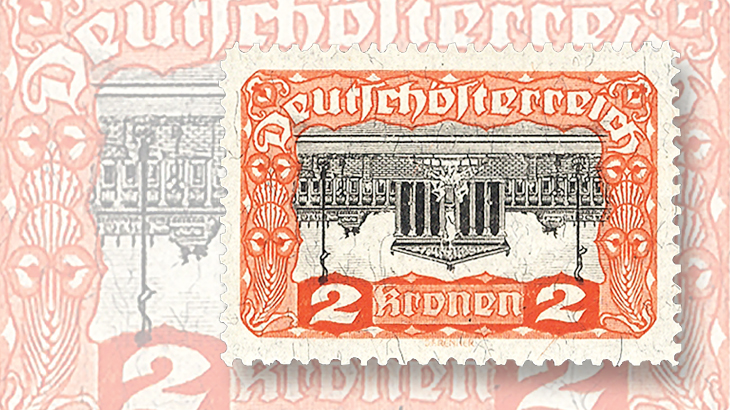 Austria printed some of its 1919 2-krone stamps with the vignette upside-down. This example showing the Parliament building sold for $6,613 at the Cherrystone sale in September.
Previous
Next

Cherrystone Auctions held a sale of United States, China and worldwide stamps and postal history Sept. 9-10 in New York. The sale was previewed in Linn’s issue of Sept. 7. Not surprisingly, the top realizations went to a pair of well-known rarities from China.

Inverted centers are perhaps the most eye-catching and desirable kinds of stamp errors. Nothing in philately says “to err is human” as recognizably as the image of that little airplane whizzing along upside down.

Legend has it that before he discovered his famous sheet of 24¢ Jenny Invert airmail stamps at a Washington, D.C., post office counter in 1918, William T. Robey had predicted to a friend that such a misprint might soon come to light.

In modern stamp production, presses print multiple colors simultaneously onto paper from continuous rolls, and errors such as the 24¢ Jenny Invert stamps are physically impossible. But historically, inverts happened with some regularity, albeit in very small quantities.

They typically occurred when the stamp paper was fed manually, sheet by sheet, through a press that applied a single ink color at a time. One or two sheets would accidentally get turned around before going through for the second color, and voila: the vignette would be topsy-turvy in relation to its frame.

Almost all inverts are scarce and valuable. They range in price from a few hundred dollars for stamps from less widely collected countries in Latin America, Africa or Europe, to five figures and six figures for inverts from the United States or China.

China’s definitive stamps of 1913-19 were printed first in London and later in Peking (modern Beijing). The two printings can be distinguished by minute differences in the designs. On the $2 denomination, showing the gateway to the Hall of Classics in black surrounded by an ornate frame in blue, about 30 examples of the Peking printing are known with the center inverted (Scott 237a).

The example in the Cherrystone sale, with lightly hinged gum and an interpane guideline at the top of the stamp, sold for $115,000, including the 15 percent buyer’s premium Cherrystone adds to all lots.

Close kin to inverted centers are inverted overprints and surcharges, which were typically applied to stamps at a later date. In 1922, China’s 3¢ definitive stamp depicting a junk at sea received a 2¢ surcharge in red, of which about a dozen with inverted overprint (Scott 247a) were later discovered by a French medical officer stationed along the Yangtze River. He reportedly used two on letters to himself and sold the rest to a stamp dealer.

The example offered by Cherrystone, with apparently never-hinged gum, sold for $149,500.

Even countries with highly advanced printing technology were not immune from producing inverts. An example of Austria’s 1919 2-krone stamp showing the black Parliament building upside-down in its fancy vermilion art nouveau frame (Scott 219a) was sold by Cherrystone for $6,613.

A comparatively late addition to the pantheon of famous inverts was the United States $1 Rush Lamp and Candle Holder of 1979, popularly known as the CIA invert because of the circumstances of its discovery.

The stamp had its tan, orange and yellow background colors printed first by lithography. The engraved details and lettering, in dark brown, were added in a second step.

One day in 1986, stamps from a single pane of 100 were discovered with those engraved details printed upside down (Scott 1610c).

A group of civilian employees at a Central Intelligence Agency office noticed the inverts among a stock of stamps purchased at the McLean, Va., post office for use on agency mail, and replaced them with correctly printed stamps they had bought themselves. Recriminations and lawsuits followed before a court verdict allowed the employees to keep their windfall, but four who refused to return single invert stamps in their possession lost their jobs.

This stamp is as scarce as the 24¢ Jenny Invert: slightly fewer than 100 are known. Nevertheless, the CIA invert lacks the universal popularity of the Jenny and sells for substantially less. The example in the Cherrystone sale in September went for $26,450.

The ink was barely dry on stamps for the new nation of Panama when the United States took some of them and added “Canal Zone” overprints for use in the 50-mile strip bordering that engineering marvel.

Some of the 2-centesimo stamps, printed by the American Bank Note Co. in New York, were converted in 1912 into booklets for the convenience of postal customers in the Canal Zone. These included, in a few cases, stamps that had poor old Don Fernandez de Cordoba doing somersaults (Scott 39f).

Only one intact booklet is known to have survived with this error, which affects both panes of six. It is hard to imagine how the inverts passed unnoticed through both the overprinting process and the booklet-making process, which were carried out largely by hand, but they did. Cherrystone sold the unique booklet for $17,250.