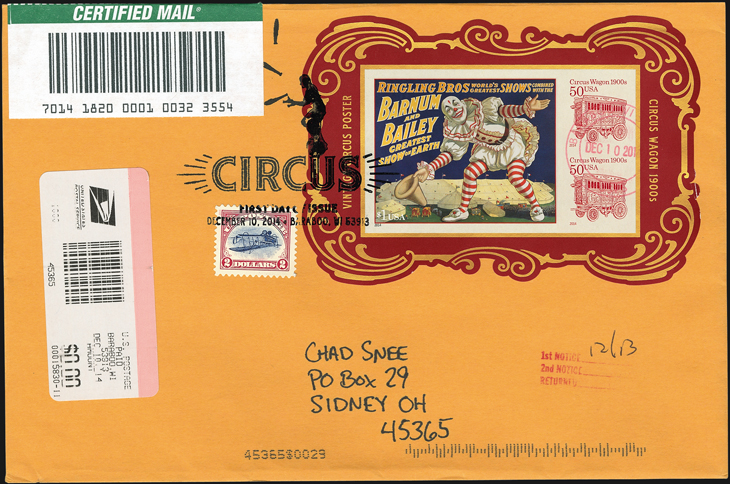 Jay Bigalke, editor of The American Philatelist and a former Linn’s senior editor, was there for all the festivities.

Bigalke is an avid first-day cover aficionado, and he serviced a number of FDCs for the Circus sheet while attending the ceremony.

One of these covers, which he was kind enough to send to me at Linn’s editorial offices in Sidney, Ohio, is illustrated nearby.

An official first-day-of-issue cancellation in black ties both the Circus sheet and a $2 Jenny Invert stamp to the cover.

The $1 stamp in the sheet is similar to the nondenominated (49¢) Barnum and Bailey Circus Poster stamp (Scott 4898) that was issued May 5, 2014, along with seven other stamps picturing vintage circus posters.

A red double-outline circular datestamp was used to postmark the two 50¢ Circus Wagon stamps (Scott 4905d) in the sheet.

Bigalke mailed the cover via certified mail, which cost $3.30 at the time of mailing.

He used a cardboard insert to keep the envelope rigid during transit, which minimized the possibility of damage to the Circus sheet.

A single $2 Jenny Invert stamp and the $2 Circus sheet satisfy exactly the $3.30 certified mail fee and 70¢ postage for a 2-ounce letter.

This cover is franked with the imperforate version of the Circus sheet (Scott 4905c), which is listed for the first time in the 2016 Scott Specialized Catalogue of United States Stamps and Covers.

A Circus Posters souvenir sheet with serpentine die cuts separating the three stamps, available only in the 2014 Stamp Yearbook from the U.S. Postal Service, is not listed in the Scott U.S. Specialized catalog.

Share your stories about U.S. dollar-denominated stamps and postal history. Write to Dollar-Sign Stamps, Box 4129, Sidney, OH 45365-4129; or send an email to csnee@amosmedia.com.