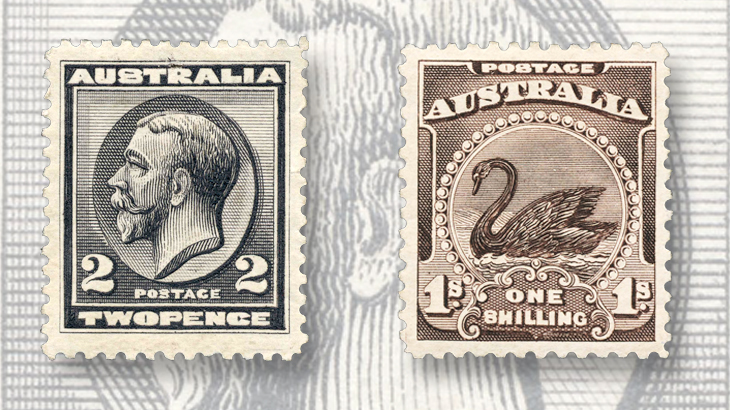 The only two examples of these perforated Australia King George V and Swan proofs available to collectors will be auctioned Oct. 30 by Mossgreen in Melbourne. 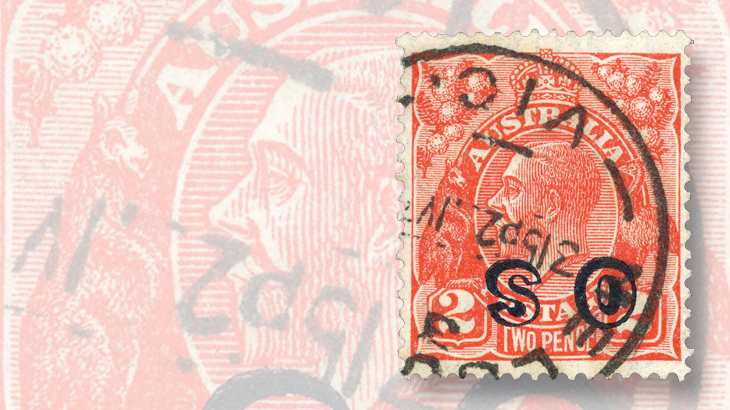 Some of Australia’s great classic issues will head to the auction block when the Arthur Gray collection of King George V issues is dispersed by Mossgreen.

The sale will take place Oct. 30 at the Mossgreen gallery on the outskirts of Melbourne in Armadale, Victoria, Australia.

Online bidders should keep in mind that time in Melbourne is currently 15 hours ahead of U.S. Eastern Time.

The auction offers choice material from the extensive collection assembled over the course of four decades by Australian collector and international exhibitor Arthur Gray (1939-2015).

In the introduction to the auction catalog, Mossgreen stamp and postal history specialist Gary Watson writes, “What you see in this catalogue is merely part — albeit the major part — of one section of the most extraordinary collection of Australian stamps of this generation, or any other.”

Watson added, “It seems unlikely that we shall ever again see such a collection that combines astonishing breadth and phenomenal depth.”

Some of the top items on offer come from the extensive selection of proofs that makes the catalog itself an essential reference for the interested Australia collector.

The two proofs will first be offered provisionally as individual consecutive lots.

Once bidding is complete on those two lots, the two proofs will be offered together with bidding commencing anew at one bid beyond the combined total of the individual top bids.

If a bid is placed exceeding the combined individual bids, those previous provisional bids will be discarded, and the proofs will be sold together as one lot.

Only two examples of each of these two proofs are known, and one set is ensconced in the archives of Australia Post. The two proofs on offer, therefore, represent the only examples available to collectors.

The auction catalog observes that “Economic considerations — plus robust public condemnation and ridicule of the 1d design — were principally responsible for the decision to abandon recess printing in favour of the more economical letterpress printing method.”

Both of the proofs are printed on gummed unwatermarked paper.

In a catalog populated with many classic treasures, another standout is the 1932-33 2d red King George V Official stamp on small crown and C of A multiple watermarked paper, used with “O.S.” inverted overprint (Scott O8a, Stanley Gibbons O133a).

One is on a cover front, and the other is in the Australia Post archives, making this stamp the only off-paper example available to collectors.

Described as “one of the most outstanding items in Arthur Gray’s extraordinary collection,” it is offered with an estimate of AUS$60,000 (US$44,000).

The auction consists of more than 500 lots, with some single lots offered with estimates beginning at AUS$100 and opening bids at AUS$50

The Mossgreen catalog for the Arthur Gray collection of King George V is available in two formats for online for viewing at www.mossgreen.com.au. Online bidding is also available.