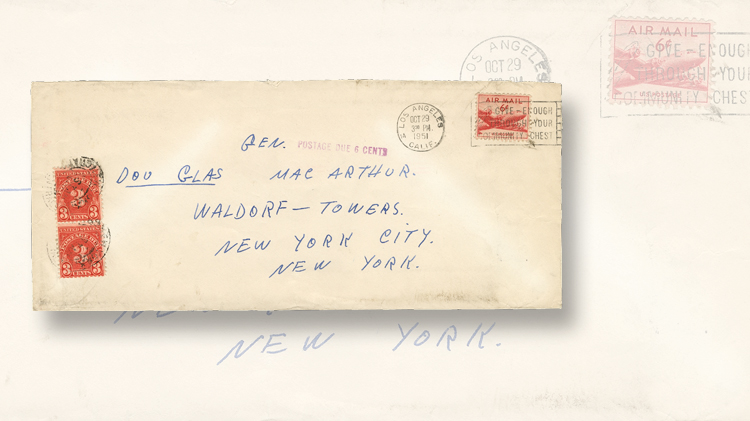 This cover addressed to Gen. Douglas MacArthur was sent Oct. 29, 1951, after his removal as commander of United Nations forces in Korea by President Harry Truman in April of that year. 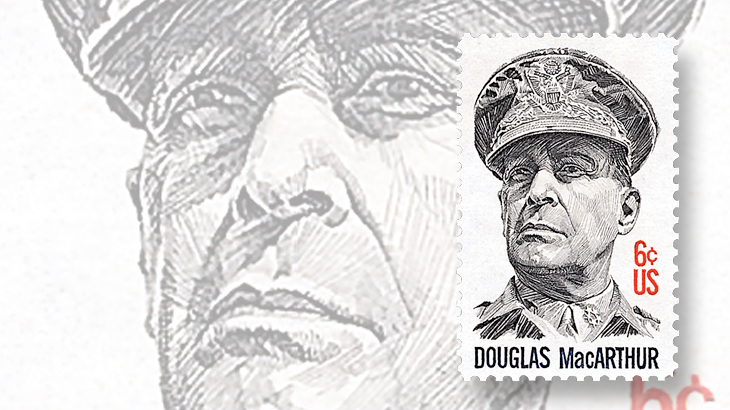 This 6¢ stamp was issued in 1971 to honor five-star Gen. Douglas MacArthur, whose storied Army career made him a national icon.
Previous
Next

Beyond people in the sports and entertainment worlds, there are not many who become genuine legends in their own time, and it is interesting to find covers addressed to such a person.

Shown nearby is a cover addressed to him at the Waldorf Towers in New York City. Canceled Oct. 29, 1951, in Los Angeles, it bears a 1949 6¢ DC-4 Skymaster airmail stamp and two 3¢ postage due stamps.

MacArthur graduated in 1903 from the U.S. Military Academy at West Point, N.Y., first in his class.

As his career progressed, he was cited for gallantry at Vera Cruz, earned two Distinguished Service Crosses and seven Silver Stars in World War I, and was promoted to brigadier general in June 1918.

Just 16 years after graduating from the academy, he was appointed its superintendent in 1919.

After serving as Army chief of staff (1930-1935), MacArthur held several senior positions in the Philippines, and then, in 1937, retired from the Army as a major general.

In July 1941, President Roosevelt recalled MacArthur to active duty, naming him commander of all U.S. forces in the Far East, leading to a third star and then a fourth shortly after the Pearl Harbor attack.

He played a prominent role in the Pacific Theater during World War II, and received the Medal of Honor for his service in the Philippines campaign. He ended the war with a fifth star as supreme commander, Southwest Pacific Area, and it was MacArthur who officially accepted Japan’s surrender Sept. 2, 1945, aboard the USS Missouri, anchored in Tokyo Bay. MacArthur then oversaw the occupation of Japan from 1945 to 1951.

When North Korea sent its armies across the 38th parallel into South Korea June 25, 1950, the Joint Chiefs of Staff unanimously recommended that Gen. MacArthur be appointed commander in chief of the United Nations Command.

As this was happening, public and behind-the-scenes discussions took place in the United States on what strategy to follow once South Korea was again cleared of invaders.

President Harry Truman determined that the objective would be limited to securing peace and assuring to the extent possible that North Korea could not repeat the adventure.

MacArthur wanted to proceed north and be in a position to punish China for its involvement, and he felt the best route to influence the decision was to energize politicians in Washington, D.C., who agreed with him. This led MacArthur to defy a direct order that he not make public statements about war strategy policy.

As a result, he was relieved of his military command by President Truman on April 10, 1951. Despite a huge public controversy that favored MacArthur and resulted in President Truman dropping to a 22 percent approval rating, a Congressional committee ultimately concluded that “the removal of General MacArthur was within the constitutional powers of the President, but the circumstances were a shock to national pride.”

After delivering a farewell address to the U.S. Congress April 19, 1951, MacArthur declined to use his celebrity as a launching pad for running for president in 1952. Instead, he took up residence in the penthouse of the Waldorf Astoria Hotel, where the aforementioned cover was sent. He continued to live at the Waldorf until his death on April 5, 1964.

His body lay in state in the U.S. Capitol, and 150,000 people filed by the bier. He was laid to rest in the rotunda of the Douglas MacArthur Memorial in Norfolk, Va.