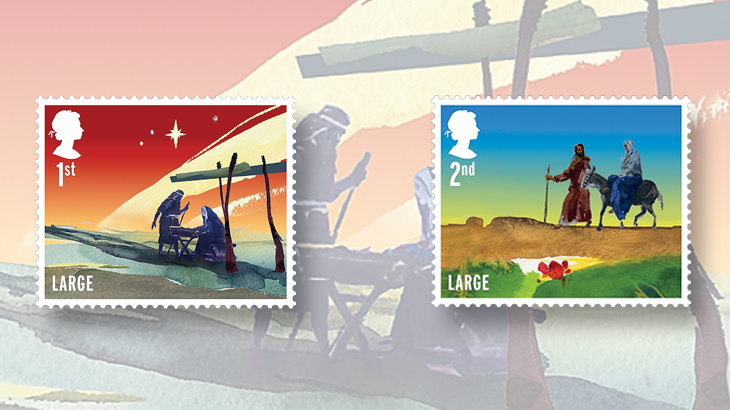 The nondenominated stamps for second- and first-class large mail show the same basic designs as the stamps for standard-size mail. The word “large” is inscribed in the lower left of each design. 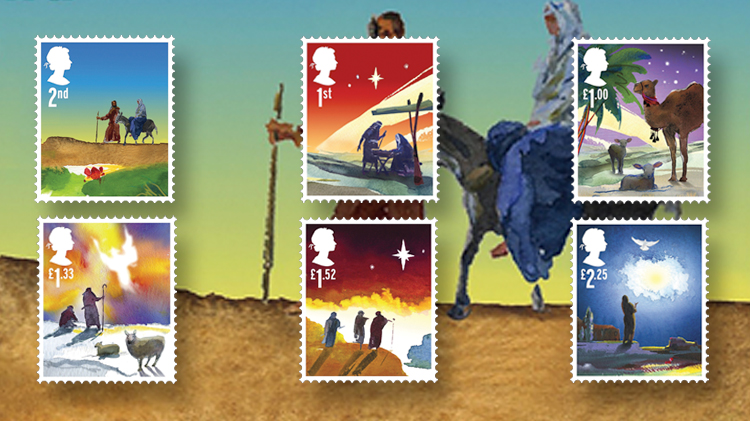 David Cecil Holmes created illustrations based on the biblical accounts of the birth of Jesus for Great Britain’s Christmas stamps issued Nov. 3. The six designs shown here represent the journey of Mary and Joseph to Bethlehem, the Nativity, the animals o
Previous
Next

The story of the Nativity is illustrated on Great Britain’s Christmas stamps issued Nov. 3.

The Nativity, or birth of Jesus, is based on the Biblical accounts in the first and second chapters of the gospels of Luke and Matthew.

In a new-issue announcement Royal Mail said, “The stamps tell the traditional Nativity story in an impressionistic style, from the Annunciation, through to the Nativity and journey of the Magi.”

The 2015 Christmas set begins with the journey of Joseph and Mary to Bethlehem to register for a census decreed by Caesar Augustus, according to Luke 2:1.

The design on the two nondenominated second-class stamps, one for standard-size mail and one for large items, shows Joseph walking and Mary who “is great with child” riding a donkey on their way to Bethlehem.

The two first-class stamps, also one for standard-size mail and one for large items, continue the story after Jesus has been born. The King James version of Luke 2:7 reads, “And she brought forth her firstborn son, and wrapped him in swaddling clothes, and laid him in a manger; because there was no room for them in the inn.”

On the design of the two first-class stamps, a bright star shines on Jesus lying in a manger under a simple structure that appears to be made from a palm tree and its leaves. Joseph and Mary are adoring the newborn.

The next stamp, a £1 denomination, pictures two lambs and a camel, which Royal Mail refers to as “the animals of the Nativity.”

An article in Royal Mail’s British Philatelic Bulletin said of this design, “No animals are mentioned in biblical accounts. But the scene on the stamp is easy to imagine, as camels would have been the favoured mode of travel for the wealthy Wise Men, and the shepherds had hurried to the scene after leaving their flocks unguarded in the fields outside Bethlehem.”

The £1.33 stamp shows the angel of the Lord appearing to shepherds, telling them of the birth of Jesus and where they can find him.

The next design in the Christmas set shows the Magi following the “Star in the East.”

While the Magi, also known as the Wise Men and the Three Kings, often are shown riding camels, they are traveling on foot on the design of the £1.52 stamp.

The high denomination in the set, £2.25, features the Annunciation, the announcement by the angel Gabriel to Mary that she would give birth to a son to be named Jesus. The dove on the stamp represents the Holy Spirit.

Royal Mail commissioned David Cecil Holmes, a painter and designer, to create the illustrations for the stamps. Studio David Hillman designed the stamps, using Holmes’ paintings. On his website, Hillman said, “My philosophy is that pictures are not employed to fill space but to tell a story.”

The stamps were issued in different versions: sheets of 50 and a souvenir sheet printed by De La Rue, and booklets and a large pane with stamps and labels printed by International Security Printers. The large pane was produced by lithography, and the other items by gravure.

The stamps in sheets of 50 (sold as panes of 25 at most postal outlets) are self-adhesive. The two stamps for large mail measure 34 millimeters by 28mm each, and the other six stamps are 24mm by 28mm each. All are perforated gauge 14.5 by 14.

The souvenir sheet contains the eight stamps with moisture activated gum and includes a desert scene, the star and the words “Christmas 2015” in the selvage. The sheet measures 179mm by 28mm, not including the bar code.

The first- and second-class stamps for standard mail are available in booklets of 12.

Royal Mail calls the pane with stamps and labels a “generic sheet.” It contains 20 stamps, eight each of the first- and second-class stamps for standard-size mail, and one each of the £1, £1.33, £1.52 and £2.25 stamps. Verses from the King James version of the Bible are inscribed on 12 of the 20 labels. The designs of the other eight labels form part of the background illustration of a shepherd, sheep, dove, star, hill and tree at night.

Other products to be offered in conjunction with the Christmas stamps include first-day covers; a set of nine postcards reproducing the designs of the eight stamps and the souvenir sheet; and a presentation pack with the stamps and additional illustrations by Holmes and text by Rowan Williams, the former Archbishop of Canterbury and master of Magdalene College, Cambridge.