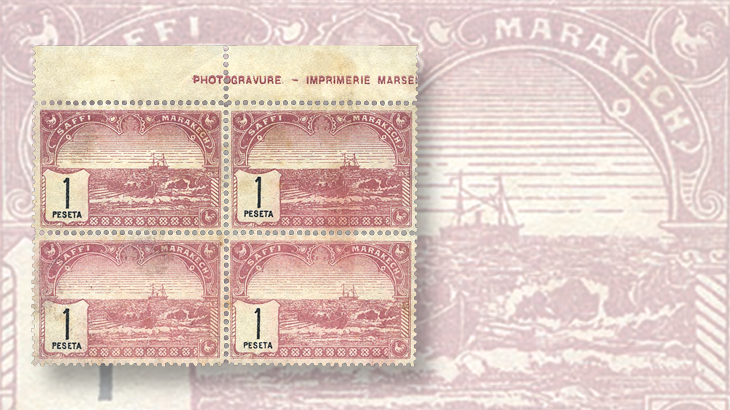 Morocco local post stamps are currently in demand and selling well. This imprint block of four of a Safi-Marrakech local was offered in a recent Behr mail-bid sale.

Morocco, a kingdom in the Maghreb region of North Africa, has coasts on both the Mediterranean Sea and the Atlantic Ocean.

It was part of the Carthaginian Empire from the sixth century B.C. until Roman victory in the Punic Wars. It remained part of the Roman Empire until the empire’s collapse in the fifth century.

The indigenous population of Morocco is Berber but with a strong Arabic overlay since the Muslim conquest in the seventh century.

In the 19th century, Morocco was an independent sultanate, but both France and Spain began encroaching on its territory.

Spain invaded and established a protectorate in 1859. The Spanish Protectorate comprised that area of the country along the straits of Gibraltar.

French postal presence began with French post offices in the sultanate in 1891. The French Protectorate was established in 1912 and controlled most of the interior and the Atlantic Coast.

The 2015 Scott Classic Specialized Catalogue of Stamps and Covers 1840-1940 lists and values stamps of the sultanate, the Spanish Protectorate and the French Protectorate, but does not list most local post stamps.

A number of local courier and delivery systems issued stamps. A few of them include Fez to Meknes, Fez to Sefrou, Mogador to Marrakech, Mazagan and Marrakech, Tangier and Larache, Tetouan to Al Ksar, Al Ksar to Ouazzane, Mogador to Agadir, Tangier to Tetouan, and many others.

There is strong demand for all Morocco local post stamps. Many of the stamps are quite colorful and feature exotic beasts such as camels and lions in the designs.

If you want to get serious about collecting these stamps, you will probably want to acquire the French-language Yvert et Tellier catalog for Morocco local post stamps.

Many sets of these locals sell for $50 or more, and some of the scarcer stamps can sell for up to $80. We are not recommending that you go out and buy these stamps at retail, unless you intend to specialize in collecting them. But if you come across some inexpensively priced in dealer stocks or accumulations, it is probably worth a gamble to buy them.