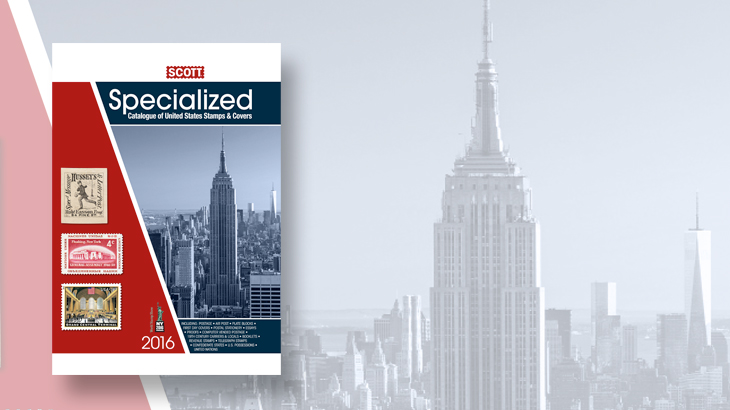 Numerous additions and clarifications have been made throughout the listings in the 2016 Scott Specialized Catalogue of United States Stamps and Covers.

The biggest editorial advance in the 2016 Scott Specialized Catalogue of United States Stamps and Covers is the addition of minor-number listings for imperforate stamps from uncut press sheets without die cuts. In the special feature in the recently published catalog, Scott managing editor Charles Snee explains how the popularity of imperforate stamps among collectors and the frustration voiced by stamp dealers who found it difficult to inventory these stamps without a Scott number caused the Scott editors to rethink the Scott listing policy. Beginning with this 2016 Scott U.S. Specialized catalog, imperf stamps from uncut press sheets without die cuts are listed as minor numbers, which means a lowercase letter is added to the number.

The explanatory notes following Scott 2868 and 4693 have been revised to reflect the additions and changes made to the press-sheet listings. Catalog users should familiarize themselves with these notes.

As always, hats off to Scott editor emeritus James E. Kloetzel for working tirelessly on the hundreds of revised and expanded listings in the 2016 catalog. He and the rest of the Scott editorial team stayed busy adding and expanding listings and making significant improvements throughout the catalog.

The Postage section sees the greatest amount of work each year, and this year was no exception. A new double transfer type E has been added for the 1847 10¢ Washington (Scott 2), along with an illustration. The double transfer involves several letters at the top with the top frame line recut.

More new EDUs in the Postage section appear for 2016 than has been typical in recent years. One EDUI has been removed after it was found that the cover in question is not the shade under which it was previously listed (Scott 78).

Many footnotes in the classic period have been updated or expanded for clarification.

Listings for small-hole singles, pairs and joint-line pairs have been added to the Presidential coils (Scott 839-851).

A dozen new modern errors have been added, including a unique imperf plate-number block of Scott 741, the 1934 2¢ red National Parks Year stamp, showing a view of the Grand Canyon.

Some plate numbers for modern plate-number coil stamps have been separated out to reflect changes in market value.

Plate block collectors will be pleased to see that the listings for the 16¢ airmail special delivery stamp (Scott CE2) have been completely reworked to better reflect the four different types of marginal markings and associated multiples that are available to collectors. Other position pieces have been reorganized, and new values have been added.

In the Stamped Envelopes and Wrappers section, a double-impression error (Scott U432k) has been added for the 1916 2¢ carmine stamped envelope. The introduction to the Postal Cards section has been updated to accurately reflect when private firms began printing postal cards.

In the Saving Stamps section, the introduction and listings for war savings stamps have been reorganized to better distinguish between unused stamps with and without gum.

New numbered minors appear in the Revenue section along with a new major listing for the National Park Service Golden Eagle Pass stamp, Scott RVP1. As the introduction to this section of the catalog states, the stamps were “issued by the National Park Service of the Department of the Interior for use as a $25 annual Golden Eagle Pass for entry to national parks nationwide. The pass was valid January 1 through December 31, 1988.” The stamps were printed as a perforated souvenir sheet of seven, and only the two right stamps were applied to the license. Typically, the Golden Eagle Pass stamp is collected as a complete souvenir sheet that bears a serial number at the top.

The introduction further explains that “the mint souvenir sheet was tipped into the National Park Service license brochure that included the souvenir sheet and the pass to which the stamps were to be affixed. Most dealers sell the mint stamp in this original issue configuration.” The stamp program was terminated after 1988.

Modern proofs have been completely brought up to date in terms of paper used for the printings, plus values. Dozens of listings for modern proofs in the Trial Color, Die and Plate Proofs section have been updated to reflect the correct paper type used for these proofs; values also have been adjusted.

A handful of plate-number multiples have been added to the Official stamps overprinted “Specimen,” as well as to a few Newspaper listings.

Several new varieties have been added to the Test Stamps listings, and myriad other enhancements have been made for clarity and ease of use of the section by collectors and dealers.

Another major project for the 2016 U.S. Specialized catalog is the complete revamping of the Vending and Affixing Machine Perforations section to include strips and blocks, other editorial enhancements, and the introduction of complete color images of perforation types in this section.

Five new EDUs for early Christmas seals have been included in the 2016 Scott U.S. Specialized catalog.

In the Philippines, the first part of a project to replace block-of-four listings with plate-block listings has been completed. This includes the new listings and values of all plate blocks beginning with Scott 241 and continuing through Scott 353a.

Other changes in the 2016 Scott U.S. Specialized catalog include the correction of stamp colors in the 3¢ purple and violet stamps from 1931 through the early 1940s; census updates for five cities in the Registry Exchange Labels section, and the addition of a new handstamped-name label listing for Miami, Florida: No. FX-MA2; and innumerable other additions and clarifications throughout the catalog.

The trend evident in recent years continues. The market is strong in very high grade stamps, rarities and interesting covers. This trend is not easily seen in the main body of the catalog, where stamps in the grade of very fine are valued. It is more easily seen in the Scott Stamp Values section of the catalog, where the highest grades tend to maintain or even increase their values, even though stamps in lower grades often see dips in value.