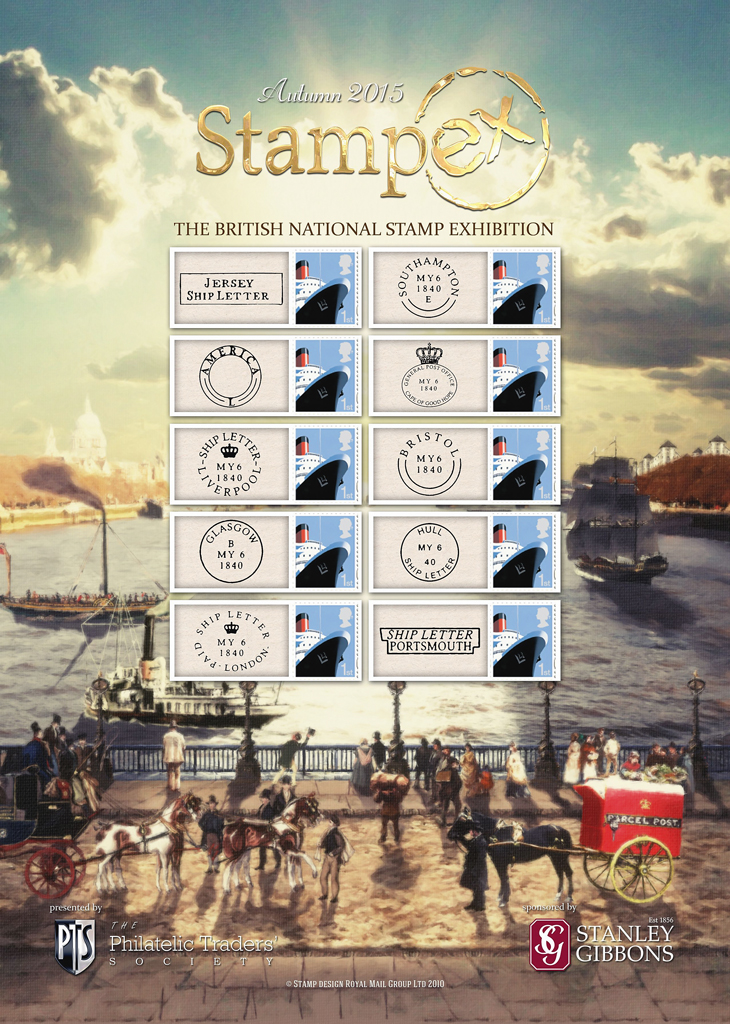 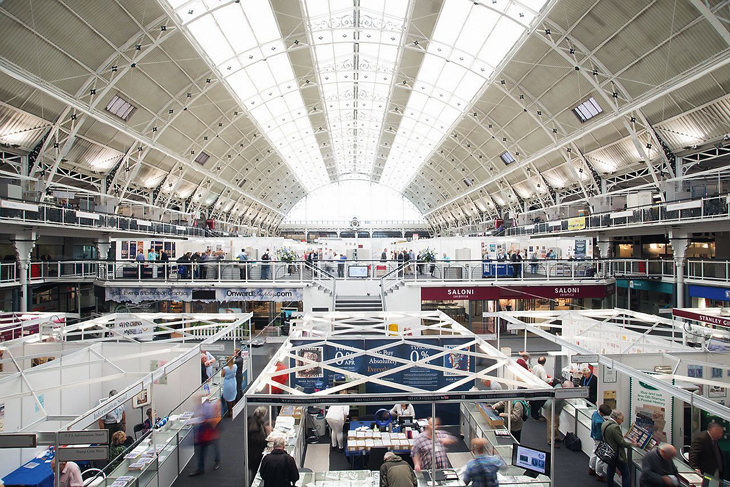 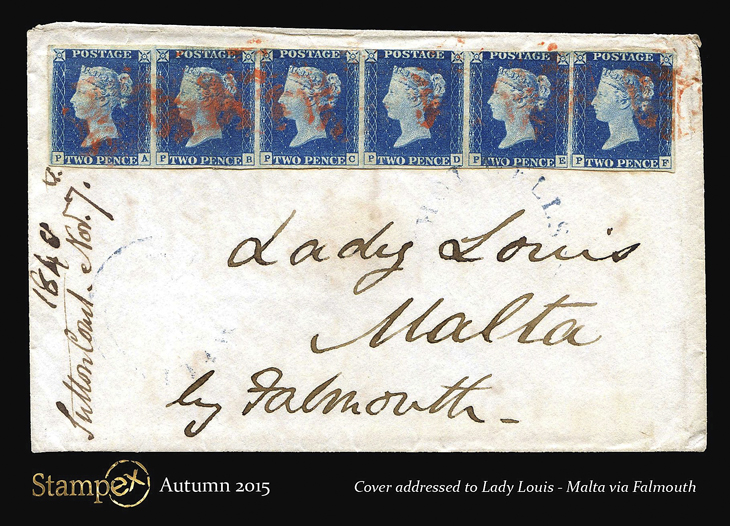 The double letter sheet to Malta from the famous Lady Louis correspondence is reproduced on this souvenir postcard offered at Autumn Stampex 2015. The letter sheet bears two horizontal strips of three of the Great Britain 1840 Two-Penny Blue stamp.
Previous
Next

In mid-September I traveled to London, England, to attend Autumn Stampex, one of two British national stamp shows sponsored by the Philatelic Traders’ Society, Great Britain’s national stamp dealers association. The show took place Sept. 16-19 at the Business Design Centre in Islington (central north London), a comfortable and attractive venue for a stamp show. Although Islington is outside the typical tourist attractions, the location is easily accessible by London Underground, the city’s rapid transit system, and by bus.

Collectors and dealers had expressed some concern that the show’s attendance would be lower than usual because London 2015 (Europhilex), an international stamp show celebrating the 175th anniversary of the Penny Black, the world’s first postage stamp, was held at the same location last May.

Attendance was down somewhat, although the show committee reports that visitors numbered in excess of 5,000. John Curtain Ltd./JC Stamps operated two booths at the show, both of which had people waiting in line to search through the dealer’s stock. Dealers from the United States included Willard Allman, Peter Singer, George Holschauer of Colonial Stamp Co., and Gary DuBro of CompuStamp.

The theme of Autumn Stampex was sea travel. The show organizers offered a Smilers sheet of 10 labels featuring ship letter markings. Smilers is the name of Royal Mail’s stamps that can be personalized by adding a photograph to labels that are printed se-tenant (side-by-side) with the nondenominated “1st” (first-class domestic rate) stamps.

The Royal Mail stand (booth) at Stampex attracted crowds of collectors following the unveiling of the designs of Royal Mail’s 12-stamp Star Wars set, souvenir sheet of six stamps, and other collector products to be issued Oct. 20. Collectors were able to view the printed Star Wars stamps and place preorders for the stamps. A 26-page prestige booklet will be issued Dec. 17 to coincide with the release in Great Britain of the first film in the third Star Wars trilogy, The Force Awakens. The movie, which was filmed in London and Gloucester, will be released in the United States Dec. 18.

Collectors also were buying the nondenominated first-class Machin-head definitive stamp, which was changed from red to purple Sept. 9 to honor Queen Elizabeth II as Britain’s longest-reigning sovereign. The security overprint across the background of the stamp behind the queen’s profile reads “LONG TO REIGN OVER US” instead of the usual “ROYAL MAIL,” in honor of the queen’s 63-year reign.

Stamp Active Network, the youth group of the Association of British Philatelic Societies, conducted a stamp auction for children on Sept. 19. This activity is a clever way to introduce young collectors to bidding at auctions.

More than 100 stamp dealers occupied stands at Stampex. A number of them are gearing up for World Stamp Show-NY 2016, which will take place May 28-June 4 at the Jacob Javits Center in New York City.

In the coming weeks, we will announce Linn’s plans for the largest stamp show to be held in the United States in a decade.

The PTS sponsors two stamps shows in London each year: one in February, and the other in September. Spring Stampex 2016, to be held Feb. 17-20, will celebrate the 60th birthday year of the shows. PTS secretary Lucie Warren will give vouchers to those who stop by the PTS office at the show and mention that they learned about Spring Stampex 2016 in Linn’s.

For additional information on Stampex, visit the PTS website.