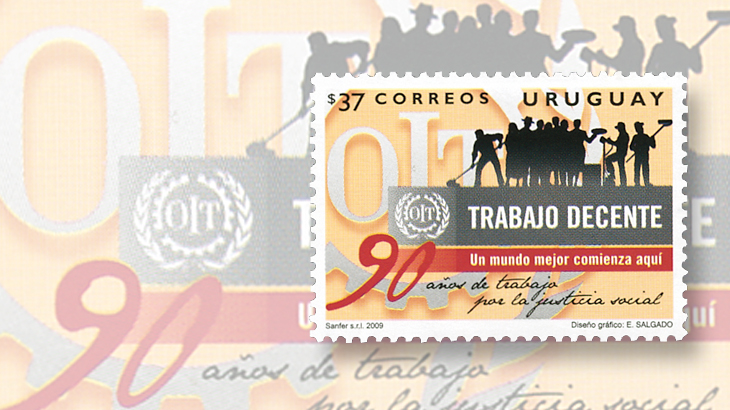 A small silhouette of a worker with a broom is included in the design of a stamp from Uruguay. 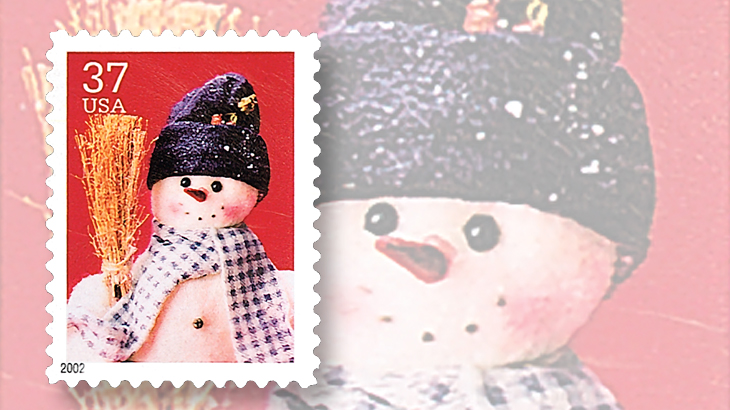 A snowman with a broom is pictured on this United States Christmas stamp from 2002. 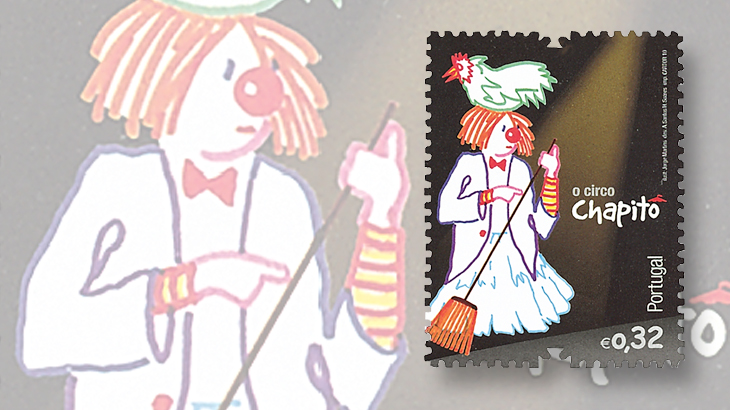 A clown uses a broom as a prop on this stamp from Portugal honoring the Chapito circus. 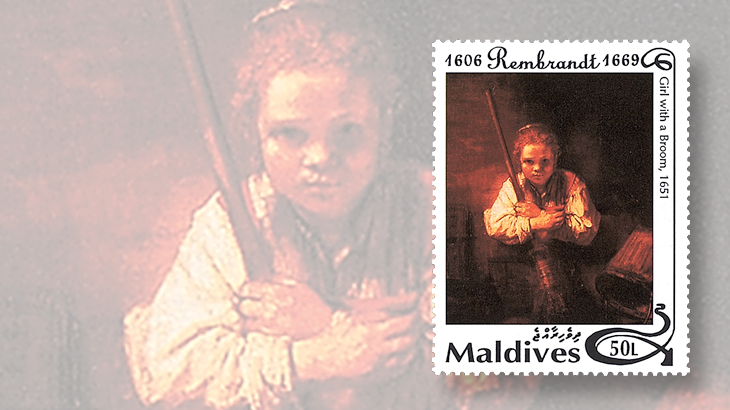 Rembrant’s painting Girl with a Broom is reproduced on this stamp from the Maldives. 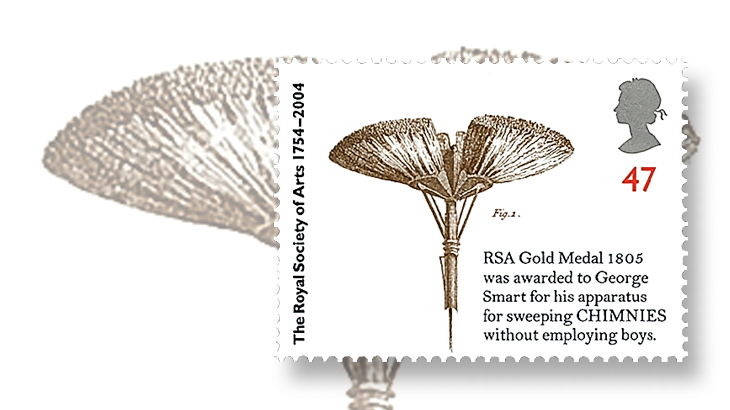 Apparatus used for sweeping chimneys is pictured on a 2004 commemorative stamp from Great Britain. This apparatus was awarded a Royal Society of Arts gold medal in 1805. 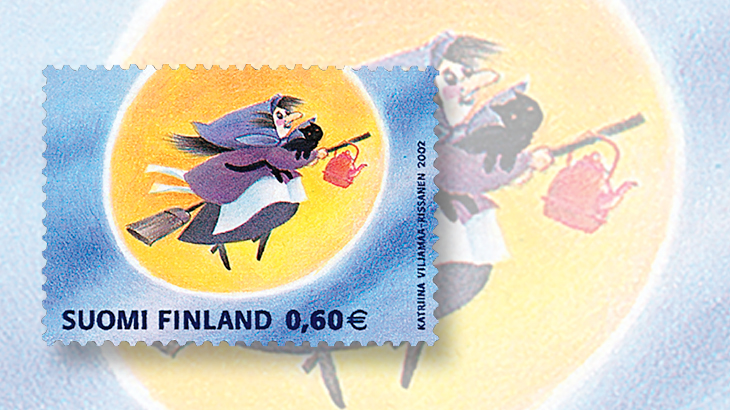 A stamp from Finland shows a witch flying on her broomstick. This self-adhesive stamp was issued for Easter, not Halloween. 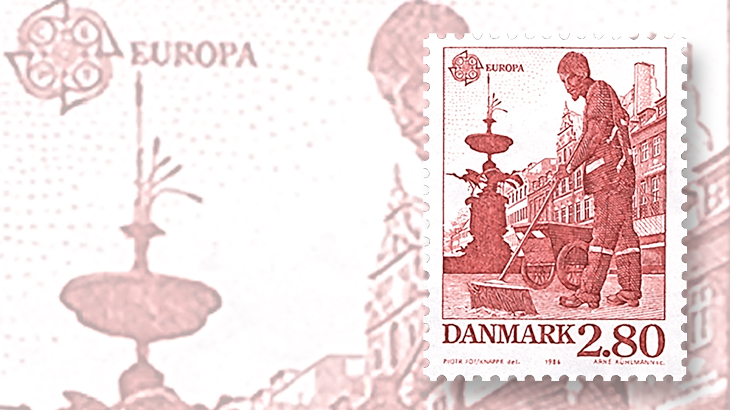 A 1986 engraved Europa stamp from Denmark depicts a street sweeper at work. 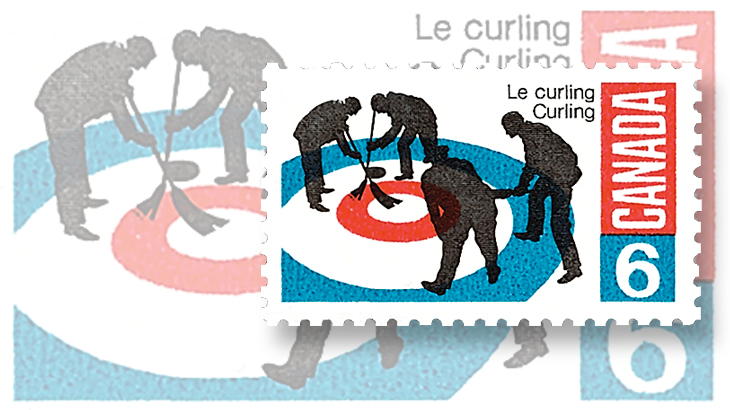 Brooms used in the sport of curling can be seen on this 1969 commemorative from Canada. 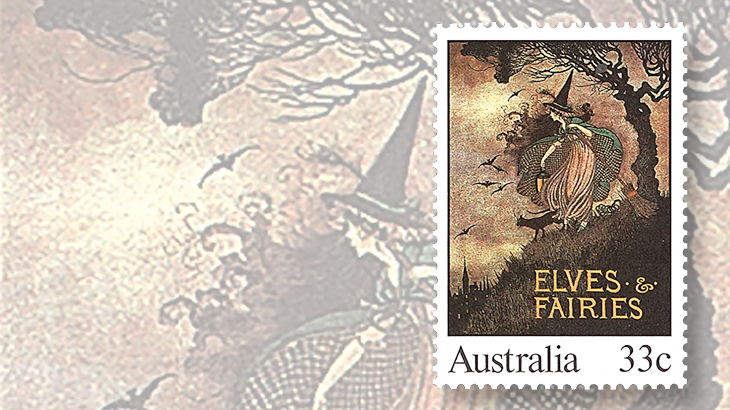 A stamp from Australia depicts a witch, broom and black cat in an illustration by Ida Rentoul Outhwaite for the 1916 book Elves & Fairies. 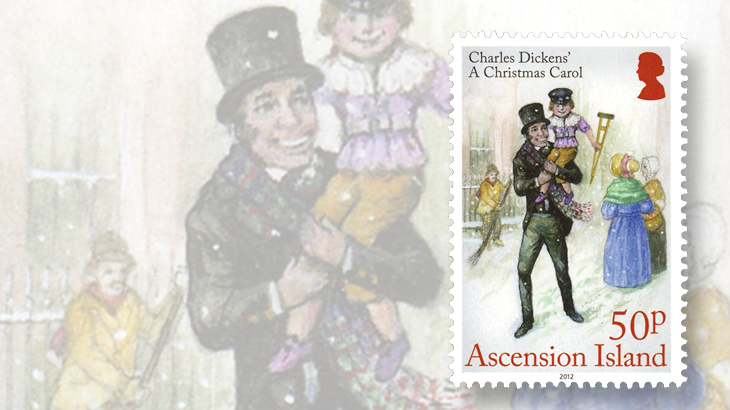 In the scene from Charles Dickens’ A Christmas Carol shown on this Ascension Island stamp, a man can be seen sweeping the snow away.
Previous
Next

You expect to see witches flying by on their broomsticks on Halloween stamps, but brooms — with or without witches — also are pictured on a variety of other stamps.

These stamps feature folklore, fiction and fun, as well as traditional occupations.

In Finland and some other Scandinavian countries, witches are part of an Easter tradition that is similar to trick or treat. In briefly explaining how the tradition originated, an article in the March 28, 2013, Helsinki Times said, “Back in the day, evil spirits and witches were believed to roam around the country, doing mischief on the Saturday before Easter.”

Wicked witches, often accompanied by their brooms, are the staple of many folk and fairy tales, as well as some more modern stories. Belgium pictures a witch and broom on one of 10 booklet stamps issued Jan. 21, 2013, featuring characters from fairy tales (Scott 2612), as does Belarus on a 2013 stamp showing an animated version of a traditional folk tale (881b).

A 1985 stamp from Australia shows an illustration by Ida Rentoul Outhwaite of a young witch with a broom and black cat from Elves & Fairies published in 1916 (Scott 960).

In the popular Harry Potter series of books for young adults by J.K. Rawling and the subsequent films, the title character and his wizard friends fly on brooms. One of these, the Firebolt, is shown on a 2005 stamp from Taiwan commemorating the opening of the film Harry Potter and the Goblet of Fire (Scott 3641e).

Other stamps honoring works of fiction portray ordinary, nonmagical brooms. For example, the ant from Aesop’s fable The Ant and the Grasshopper is sweeping in the design of a San Marino stamp issued in 1982 to mark the savings bank centenary (Scott 1018).

In 2012, Ascension Island selected scenes from A Christmas Carol by Charles Dickens for its Christmas stamps. Shown in the background of the 50-penny stamp (Scott 1064) is a man sweeping a snowy street.

In conjunction with International Literacy Year in 1990, Antigua and Barbuda issued stamps showing Disney characters recreating scenes from the works of Dickens. On the 45¢ denomination, Donald Duck has broom in hand in a scene from Bleak House (Scott 1335).

While other stamps show cartoon characters sweeping, one stamp in the 2008 Malaysian Cartoons set pictures a push broom being used as an imaginary guitar in artwork from the 2007 comic book Town Boy by Lat (Scott 1226d).

In another unusual use of a broom, a stamp in Mongolia’s 1998 The Three Stooges issue shows Larry taking a whisk broom to Curly’s head (Scott 2335j).

Brooms also are found on a few stamps representing the visual arts. The Hummel figurine Sweeper Girl is pictured on a 1992 stamp from Uganda (Scott 1036), and the Rembrandt painting Girl with a Broom is reproduced on stamps from the Maldive Islands (1929a) and Micronesia (692c).

Several other postal administrations have included brooms on their snowmen stamp designs. Most of these stamps were issued for Christmas (Iceland Scott 811, Lithuania 955, Moldova 847, St. Pierre and Miquelon 815 and Slovenia 509 and 682) or generic winter greetings (Japan 3616b). However, Georgia shows a snowman holding a broom on a Europa stamp issued Jan. 28, 2004 (Scott 340), part of the multination series with the theme of holidays; and Norway pictures a snowman with broom on a Europa stamp issued June 7, 1989 (942), with the theme of children’s games.

One clown holds a broom on a stamp, part of Portugal’s 2010 set honoring Lisbon’s Chapito circus.

The origins of the winter sport of curling are traced back to the 16th century with teams using brooms to push rocks across the frozen ponds and lochs of Scotland. Scottish emigrants brought this sport with them to other countries, most notably Canada.

Various styles of curling brooms are shown on stamps of other countries, from early 20th-century brooms on  a 1997 stamp from Tanzania (Scott 1603), to a push broom on a Disney design from Guyana (2462), to a modern curling broom on a 2005 Czech Republic commemorative (3286).

Both definitive (regular-issue) and commemorative stamps show brooms being used to get work done.

For example, an engraved stamp from Denmark pictures a street sweeper (Scott 826). This stamp was issued Sept. 4, 1986, part of that year’s Europa series with the theme of protecting nature and the environment.

Ten stamps issued by Ecuador Nov. 30, 2005, reproduce 19th-century watercolors of people in Quito. One stamp shows a street sweeper (1757j). Portugal pictures a broom seller on a stamp in a definitive series focusing on 19th-century professions. This 5-escudo stamp was issued March 12, 1997 (Scott 2148). Similarly, a broom maker is shown on a stamp issued by San Marino Sept. 19, 2002 (1543), in a set featuring craftsmen in traditional occupations.

Stamps from Lesotho (Scott 282), Norfolk Island (707) and St. Thomas and Prince Islands (1194) show brooms along with other traditional handicrafts. A broom made of peacock feathers is pictured on India’s 2013 stamp honoring Jain monk Acharya Gyansagar (2652).

Some stamps you have to examine closely to find the broom. Tiny brooms are included in the designs of the following stamps: a 2011 commemorative from Taiwan marking the 100th anniversary of Boy Scouts in China (Republic of China Scott 4014), 2013 and 2014 Spring Greeting stamps from Japan (3508e and 3644b), a stamp representing the city of Christchurch in New Zealand’s Tiki Tour/Part 2 pane (2415q), and Uruguay’s 2009 commemorative for the 90th anniversary of the International Labor Organization (2272).

This is just a sampling of stamps that picture brooms. There are more. For example, a stamp in Hong Kong’s 2005 issue featuring the alphabet shows a broom forming the letter “T” (Scott 1126t).

Also, the topic could be expanded in various ways: adding items that have been used in making brooms, delving deeper into folklore associated with them, or including related cleaning devices, such as brushes, mops and even vacuum cleaners. And yes, there are stamps that picture vacuum cleaners, two from Sweden (Scott 1498 and 2303) and one from Finland (1380e).

As for brushes, look for stamps that feature chimney sweeps and their equipment, including a 2004 Great Britain stamp honoring the 250th anniversary of the Royal Society of Arts (Scott 2225).