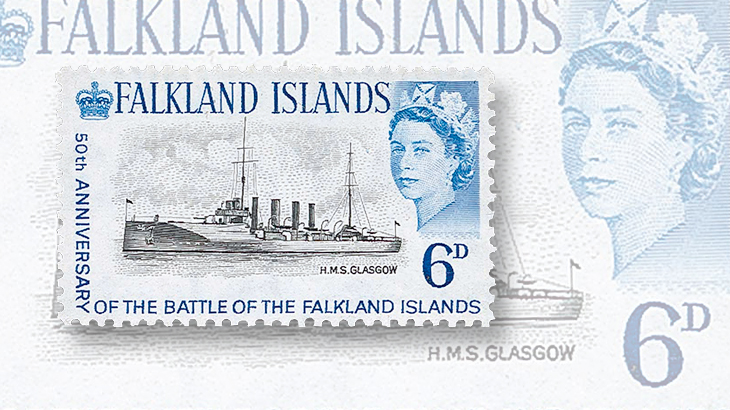 The 1964 6-penny Glasgow vignette error from Falkland Islands is printed with the ship intended for the 2½d stamp. This example will be auctioned by H.R. Harmer Oct. 29-31.

The Oct. 29-31 auction by H.R. Harmer is being celebrated by the firm as “The 75th Anniversary Sale.”

The H.R. Harmer website explains that in 1940, the company founded in 1918 by Henry R. Harmer opened its New York auction gallery.

The sale features United States, British Commonwealth and worldwide stamps, postal history, proofs and essays, and collections, including more than 300 lots of Hawaii postal history, and the Charles W. Thrower collection of the 1914-16 Jefferson postal card.

A notable rarity from the Thrower collection offered in this sale is one of only three known examples of the 1¢ green Jefferson postal card, mint with quadruple impression (Scott UX27f). Accompanied by a 1989 Beachboard certificate, it is listed by H.R. Harmer with an estimate of $5,000 to $7,500.

The first cover bears a plate number single of the $2 deep blue U.S. Capitol stamp from the 1922-25 Fourth Bureau issue (Scott 572) affixed to a legal-size surcharged 2¢-on-4¢ chocolate Washington stamped envelope (U472), postmarked on the issue date for the stamp, March 20, 1923, with a Washington, D.C., machine cancel.

The envelope was created by pioneer FDC and first-flight cover servicer Henry Hammelman, and addressed to W.O. Siebold, an acquaintance who would also collect and service covers of his own.

The second cover is also a Hammelman creation addressed to Siebold, bearing a $5 carmine and blue America plate number single stamp from the same series (Scott 573) and tied with another March 20, 1923, date of issue Washington, D.C., machine cancel on the surcharged Washington envelope.

A terrific selection of U.S. proof material on offer represents many of the country’s classic issues, including a large die proof set of the 1893 Columbian issues mounted on large card (Scott 230P1-245P1), a set of large die plate proofs of the 1923 8¢ to 24¢ airmails on full size card signed by Postmaster General Harry S. New (C4P1-C6P1), and many others.

A fascinating error stamp from the British Commonwealth is among the top items from the worldwide stamp selection.

The Falkland Islands’ lovely engraved bicolor commemorative set for the 50th anniversary of the 1914 Battle of the Falkland Islands was issued Dec. 8, 1964, with frames in various colors and the vignette showing a ship or the battle memorial in black.

The 6-penny stamp, which normally depicts the HMS Kent, is known mistakenly printed with the vignette of the 2½d stamp, the HMS Glasgow.

About 25 examples of this error (Scott 151a) are recorded; this one is never hinged and well centered, and described as post office fresh.