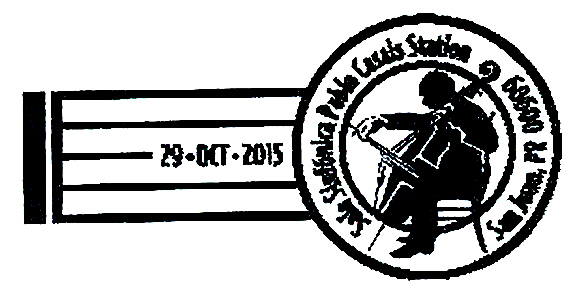 Sala Sinfonica Pablo Casals is a 1,300-seat concert hall in San Juan, Puerto Rico, that serves as the home to the Puerto Rico Symphony Orchestra. The first concert performed there took place Oct. 3, 2009.

The hall is named for cellist and conductor Pablo Casals (1876-1973), who was born in Catalonia, Spain. Casals’ mother was from Puerto Rico, and his father was a Spanish organist and choir master who taught his sons music.

Pablo Casals made his home in Puerto Rico for many years.

An Oct. 29 postmark from San Juan depicts Casals playing his cello, and pays tribute to the concert hall named in his honor.

To obtain this postmark, send your request to: