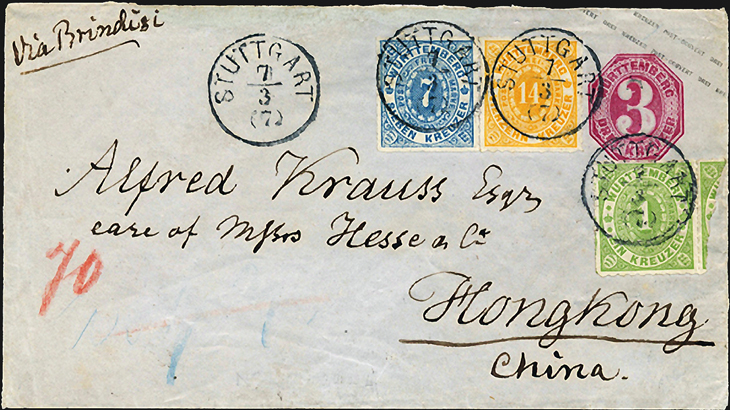 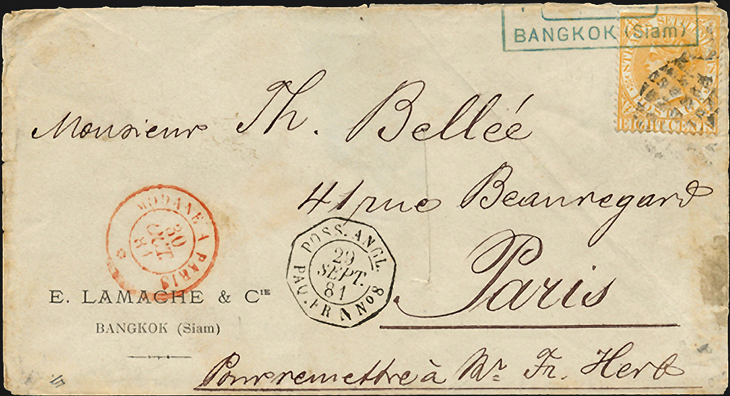 An 1881 cover mailed from Bangkok to Paris via Singapore, franked with a single Straits Settlements 8¢ orange stamp prior to the 1882 introduction of “B” overprinted issues for Bangkok.
Previous
Next

The upcoming public auction by Christoph Gaertner in Bietigheim-Bissingen, Germany (just a few kilometers north of Stuttgart), will take place Oct. 19-24 at the Gaertner auction hall, with bidding also available online, and by telephone, fax or postal mail.

The massive worldwide sale is divided into several sections, beginning with Asia on Monday; thematics, worldwide and Europe on Tuesday (with a section including airmail, zeppelin and ship mail); Germany (including states and colonies) on Wednesday; international and other collections on Thursday; additional large lots, Germany collections and literature on Friday; and picture postcards on Saturday.

With thousands of lots prepared for this weeklong event, collectors should have no problem finding their area of interest and items that fit in their collection.

Along with stamps, essays and proofs, the sale offers much in the way of postal history, including some remarkable classic examples of international mail.

The Asia session that opens the upcoming sale includes material from more than 60 regional categories, from Abu Dhabi to Vietnam, bringing together roughly 2,400 items in this daylong session.

A featured item in this sale is an 1881 cover mailed from Bangkok to Paris via Singapore, franked with the Straits Settlements 8¢ orange stamp (Scott 13). The stamp is tied to the envelope twice: with a black circle of squares handstamp, and with a partial strike of the sender’s blue rectangular cachet. More of the cachet is visible on the back, though part of the back flap bearing the cachet is missing.

Additional markings include a crisp octagonal French paquebot in black, “POSS. ANGL./PAQ. FR N No8/29/SEPT./81,” plus a red double-ring dated Paris marking on the front, a Singapore circular datestamp on the back, and a Paris arrival datestamp, also on the back.

The remarkable array of markings accentuates this scarce use of a Straits Settlements stamp on an early Bangkok cover. The following year, 1882, stamps of Straits Settlements were overprinted in black with an uppercase B. These stamps were used until 1885, when the stamps of Siam (Thailand) became “the only official postage stamps to be used in the kingdom,” according to the Scott Classic Specialized Catalogue of Stamps and Covers 1840-1940.

Another striking postal history offering comes from the German States selection to be auctioned Wednesday. This colorful 1872 Wurttemberg cover traveled from Stuttgart to Hong Kong via Brindisi, Italy.

In this instance, the franking is the first attention-getter, with a 3-kreuzer red stamped envelope uprated with three different rouletted Wurttemberg stamps (1kr yellow green, 7kr blue and 14kr orange) to complete colorfully the proper 25kr franking to an unusual destination.

With a Klaus Irtenkauf certificate, the cover is offered with a starting bid of €15,000.

The individual volumes of auction material are available for viewing on the Gaertner website.