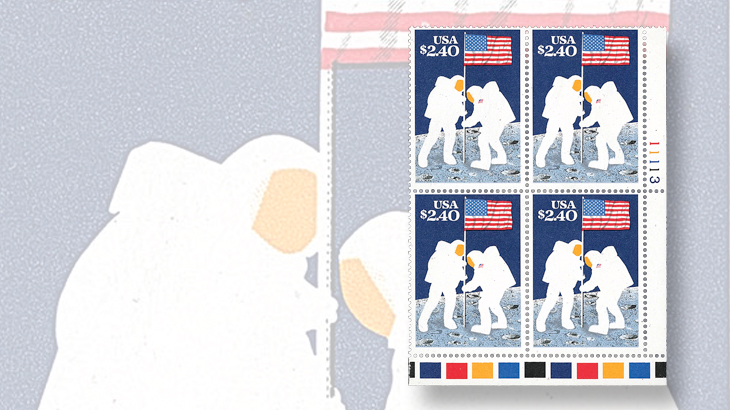 The Siegel auction firm will offer this engraved-black-omitted error of the 1989 $2.40 Moon Landing stamp during its Oct. 27-29 auction. As a plate-number block, this eye-catching error is listed but not valued in the Scott Catalogue of Errors on U.S. Pos 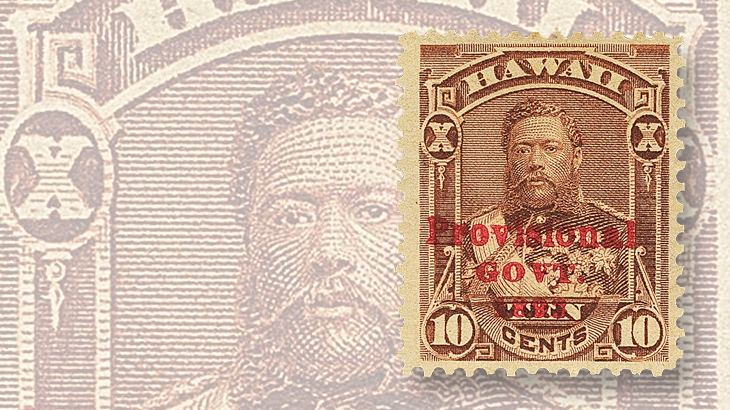 An unused example of the Hawaii 1893 10¢ red-brown King David Kalakaua with “Provisional GOVT. 1893” overprinted in red in error (Scott 61B) will be sold Oct. 29 during the Siegel firm's auction of classic Hawaii stamps and postal history. The Kalakaua er 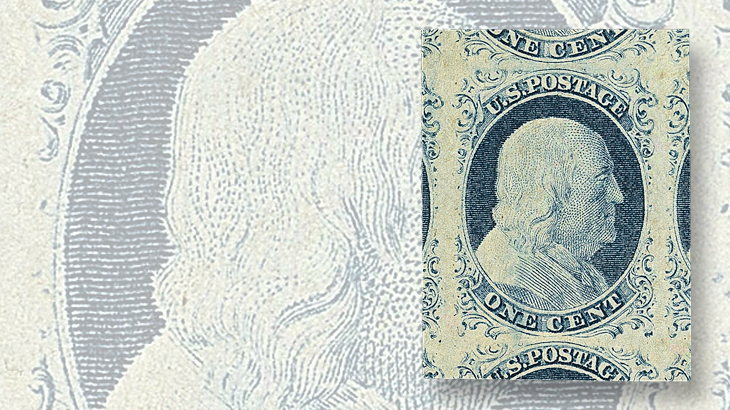 This jumbo-margined 1¢ 1851 Benjamin Franklin stamp is among the highlights up for sale during the Oct. 27-29 auction of United States stamps at Robert A. Siegel Auction Galleries in New York City.
Previous
Next

An eye-catching array of top-quality United States stamps and Hawaii stamps and postal history will move across the auction block Oct. 27-29 at Robert A. Siegel Auction Galleries in New York City.

The U.S. material will be sold in five sessions during the three-day span, and the Hawaii auction will take place the afternoon of Oct. 29, following the conclusion of the U.S. sale.

Postage issues comprise the bulk of the U.S. offerings, which begin with four lots of postmasters’ provisionals, including a choice se-tenant pair of the 1845 New York postmaster’s provisional (Scott 9X1 and 9X1a).

A stamp from the early years of U.S. stamp production that likely will attract spirited bidding is pictured nearby.

It is a mint never-hinged single of the 1851 1¢ blue Benjamin Franklin, type IV (Scott 9), with jumbo margins all around that show parts of eight other stamps.

Accompanied by a 2015 graded certificate (Gem 100) from Professional Stamp Experts, Siegel describes the stamp as a “magnificent” example that is the “essence of perfection.”

Some collectors might look down on such a stamp because other stamps in the original sheet were sacrificed to “create” this single with enormous margins.

Siegel apparently took this sentiment into account in its description in the sale catalog: “Many collectors have a tendency to discount how difficult it is to find imperforate classics in such superb condition. The assumption is that there are multiples which can be split to ‘make’ perfect singles. However, one would have to find a block of nine with no hinging in the surrounding stamps that are included in order to produce the Gem offered here.”

For perspective Siegel notes that among the classic U.S. imperforate stamps (Scott 1-17), just two examples of Scott 9 and two of Scott 11 have achieved the lofty grade of Gem 100 in mint never-hinged condition.

No doubt the consignor is aware of the importance of this stamp because it is being sold subject to a confidential reserve below which the stamp will not be sold.

Fast forwarding 140 years or so, there are several modern errors available to bidders, including a plate-number block of the 1989 $2.40 Moon Landing stamp with the engraved black omitted (Scott 2419a).

This marvelous error is illustrated nearby. The missing engraved black makes the two astronauts on the stamps look like ghosts.

According to the Scott Catalogue of Errors on U.S. Postage Stamps, just 60-80 examples of Scott 2419a have been reported.

In between these two items are hundreds of lots of choice stamps from all periods up to and including Gem 100-graded examples of the 1934 National Parks stamps.

Concluding the U.S. sale are numerous group and collection lots that can provide hours of pleasurable hunting for dealers and collectors alike.

Shown nearby is one of the Atherton stars: an unused example of the 1893 10¢ red-brown King David Kalakaua with “Provisional GOVT. 1893” overprinted in red in error (Scott 61B).

Just a single sheet of 50 was erroneously overprinted in red instead of black. Siegel notes that the San Francisco earthquake of 1906 “is said to have destroyed a number of examples” of this error.

Siegel cites the 2016 Scott Specialized Catalogue of United States Stamps and Covers value of $17,500 in its lot description for this elusive Hawaii stamp.

Ten singles and a pair of the famous 1851-52 Missionary stamps open the Hawaii sale.

Perhaps the most significant of these is a rejoined used pair of the 13¢ type I and type II stamps inscribed “H.I. & U.S. Postage” (Scott 4), which Siegel lists with a presale estimate of $70,000 — the combined value of two used singles in the Scott U.S. Specialized catalog.

Scattered throughout the Hawaii sale are attractive on-cover uses, including mix frankings with U.S. stamps.

Officials, postal stationery and revenues also are available. The sale concludes with postal history from the 1840s through the mid-1930s.

Catalogs for both of these sales are available for online viewing, or by mail. Write to Robert A. Siegel Auction Galleries, 60 E. 56th St., New York, NY 10022.