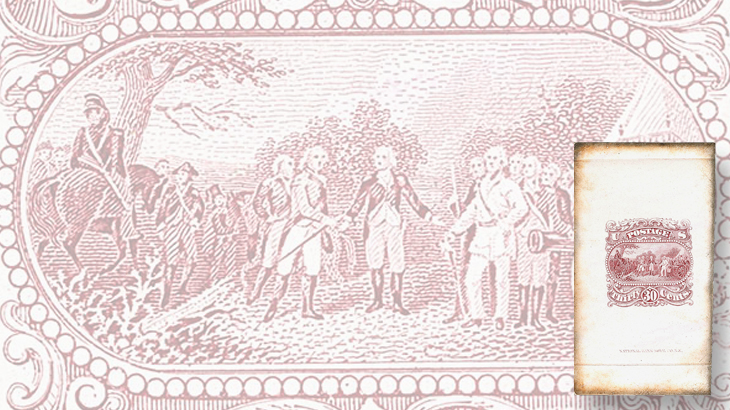 The surrender of Gen. Burgoyne is rendered in carmine on this unlisted 30¢ National Bank Note Co. large die essay for the 1869 issue, which is being offered during the Nov. 17 Siegel sale. 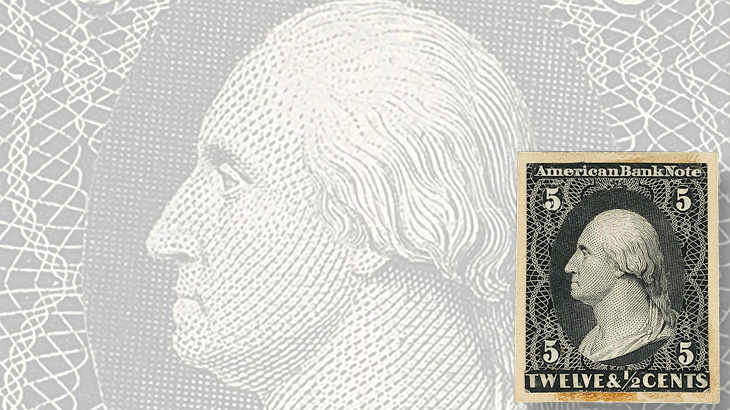 This unique American Bank Note 5¢ black Washington die essay for the United States 1861-66 issue will be auctioned Nov. 17 by Robert A. Siegel Auction Galleries in New York City.
Previous
Next

Robert A. Siegel Auction Galleries in New York City has announced a sale of “An Important Collection of United States Essays and Proofs,” which the auction catalog notes is “offered at unreserved auction by order of an anonymous collector.”

The Nov. 17 sale presents a significant selection of more than 430 lots, including some unique items and others not previously listed in the 2016 Scott Specialized Catalogue of United States Stamps and Covers. The Scott catalog organizes, illustrates and values essays in one section, and does the same for trial color, die and plate proofs in another.

These collecting areas provide a detailed look into what might have been, with many essays and proofs offering designs that never became actual stamps, or colors and combinations that were considered but eventually discarded.

They are a treasure trove for anyone who appreciates stamp art and its development.

For specialist collectors, essays and proofs provide important insight into issues that actually did become stamps.

Take, for example, the 5¢ Franklin and 10¢ Washington issues of 1847, the nation’s first postage stamps, which are represented in this sale by many large proofs in singles and sets that show these designs surrounded by cross hatching (though sometimes not) and in a rainbow array of different ink colors and printed on papers of different colors.

Some, such as the deep orange and deep yellow 5¢ Franklin large-die trial color proofs printed on pink bond paper, unlisted in Scott, have a startling appearance when compared with the red-brown tones of the issued stamp.

Among the many essays in this sale is one of the American Bank Note 5¢ black Washington die essays for the 1861-66 issue. This specific item, Scott 67-E6, reads “American Bank Note” across the top and is identified as unique by Siegel.

It is listed with its Scott catalog value of $7,000, and described as mounted on 22 millimeter by 26mm card, with separately mounted vignette, denominations and tablets, an intense shade, and a small gum stain at bottom.

This essay is a bit of a hybrid, combining a vignette prepared by Bald, Cousland and Co., with the engraved lathework of the American Bank Note Co. frame (the two companies merged in 1858). Siegel explains that the curious “Twelve & ½ Cents” label at the bottom “was probably taken from previous work for the Canadian government.”

Another nice find among the essays is a National Bank Note Co. 30¢ carmine large die essay for the 1869 issue with a vignette showing John Trumbull’s famous scene depicting the surrender of British Gen. John Burgoyne. Printed on a red-violet veined, marbled white ivory card, the essay is identified as Scott 121E1o, but the carmine variety of the Burgoyne essay on the special veined card also is not listed in Scott.

The essay is described as very fine, and the auction catalog description notes the $2,500 value that the Scott U.S. Specialized catalog assigns for the listed black-on-green-veined and black-on-red-violet-veined essays.

Most of the items in this sale date from the 19th century, with a few 20th century (mostly proofs) plus some representing back-of-the-book issues, including the 1923 and 1926-27 airmail sets.

The auction lots are each listed and illustrated on the Siegel website. For additional information, contact Robert A. Siegel Auction Galleries, 60 E. 56th St., New York, NY 10022, which is also the address where the auction is taking place.