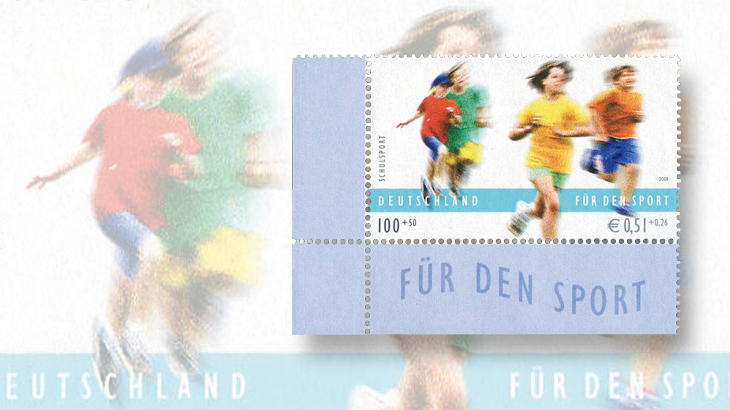 Schlegel Auctions’ sale in Berlin on Oct. 5-6 offered an unissued set of four Germany semipostal stamps from 2001. The band across the bottom of the stamps is a different color than on the issued stamps. The set sold for about $80,500.

Schlegel Auctions held a sale in Berlin on Oct. 5-6. The standout item was an unissued set of four Germany semipostal stamps from 2001 depicting ordinary citizens engaged in amateur athletic activities.

The set is very similar to the 2001 issued designs of Germany Scott B880-B883, with one difference: where the issued stamps have a band of violet color passing across the lower quarter of the stamp design with the words "Deutschland fur den Sport" dropping out in white. The set offered by Schlegel shows that band in turquoise instead.

According to Schlegel's auction catalog, 10 mint sets of the turquoise version were presented to and approved by Germany's stamp committee, but the designer, Fritz-Dieter Rothacker, changed his mind and the color was altered to violet on the stamps that were issued.

The turquoise-banded set of stamps in the Schlegel sale, all with matching lower-left sheet margins, was hammered down for €73,000, or about $80,500. One canceled set also exists, which was sold five years ago for €50,000.