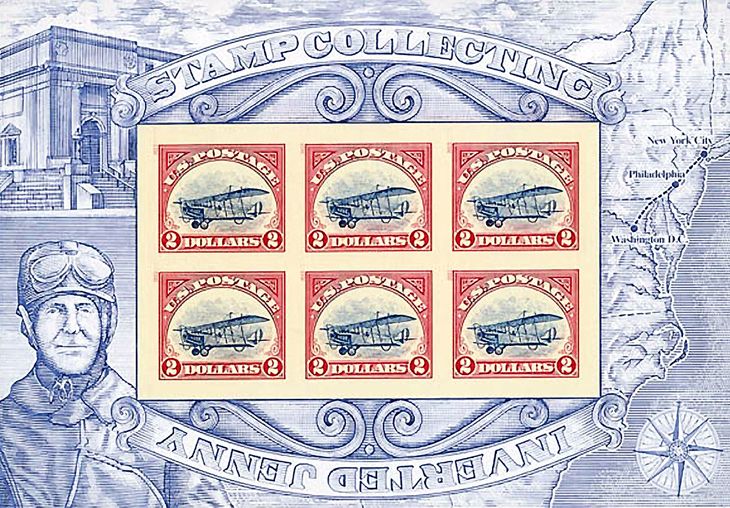 A pane of six of the upright variety of the 2013 United States $2 Jenny Invert, graded superb-98, will be offered during the Oct. 26-28 Daniel F. Kelleher auction in Danbury, Conn., of U.S., British Commonwealth and worldwide.

The upcoming Flagship sale by Daniel F. Kelleher Auctions will feature stamps and postal history of the United States, British Commonwealth and other countries worldwide.

The pane appears to be a new discovery, not previously reported, of the scarce but intentionally created variety.

The upright $2 Jenny Invert pane offered in the Kelleher auction has not been reported to the U.S. Postal Service, according to the auction description, and is accompanied by a certificate of authentication obtained just weeks ago. This pane, therefore, has not been counted in Linn’s tally of the examples discovered and reported thus far, and its appearance increases Linn’s unofficial tally of variety panes found to 27.

As a promotional scheme, the Postal Service intentionally created 100 panes of the upright variety of the 2013 Jenny Invert issue (Scott 4806). Like the millions of normal $2 stamps that show the plane flying upside down, these rare variety panes are hidden within sealed blind packaging which, from the outside, looks no different from the regular issue. The variety panes were then mixed in with the normal stamps, and are being sold through the USPS Stamp Fulfillment Services division and some post offices.

The pane is accompanied by a graded certificate of authenticity from Professional Stamp Experts of Newport Beach, Calif.

The pane is graded superb-98, which Kelleher notes is the highest graded example “and likely to remain as such as most of these are visibly off center.”

Kelleher adds that the pane has not been reported to the U.S. Postal Service, so the purchaser will have the opportunity to do so, and to receive a certificate of ownership signed by U.S. Postmaster General Megan Brennan.

Among the classic U.S. issues offered in this sale is an unused pair of the 1857 1¢ blue Benjamin Franklin consisting of the type III stamp at left and the type IIIa at right (Scott 21-22).

This example is described as very fine, having remarkably fresh color and a detailed impression; “an outstanding showpiece that would enhance any advanced collection.”

The Scott Specialized Catalogue of United States Stamps and Covers values such a pair at $22,500, with the value in italics, an indication that the item in the catalog listing trades very infrequently.

All lots in the Oct. 26-28 auction can be viewed via the Kelleher Auctions website. The public auction is taking place at the Kelleher galleries in Danbury, Conn.