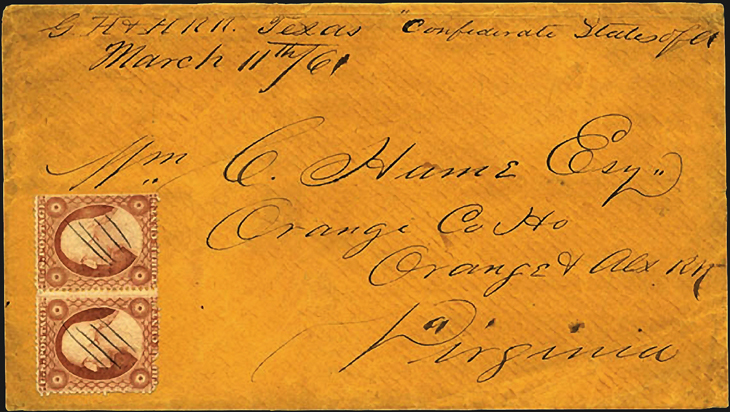 An 1861 Galveston, Houston and Henderson Railroad cover auctioned for $2,300 by Harmer-Schau is franked with a pair of U.S. 3¢ Washington stamps before the stamps were declared invalid for use in the South. 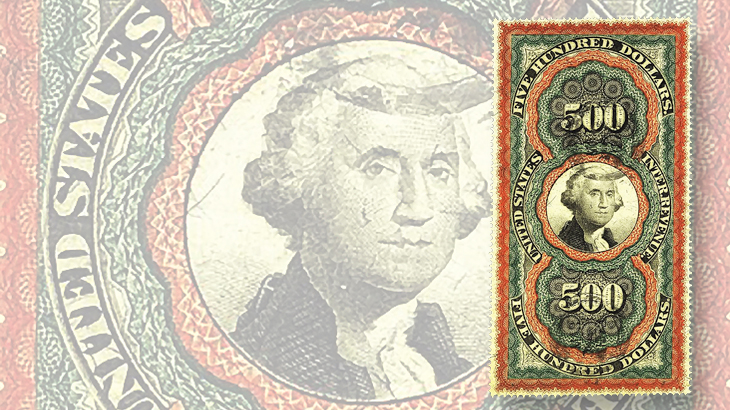 Offered during the Harmer-Schau auction at the recent APS Stampshow in Grand Rapids, Mich., this $500 U.S. second-issue documentary revenue stamp of 1871, known as the “Persian Rug,” used with light circular-cut handstamps but no manuscript cancellation,
Previous
Next

The American Philatelic Society’s annual Stampshow took place this year in Grand Rapids, Mich., with two major auctions among the attractions luring thousands of collectors and dealers to the four-day event.

Among the highlights of the Harmer-Schau sale was a magnificent $500 U.S. second-issue documentary revenue stamp of 1871, Scott R133.

The so-called “Persian Rugs” are among the most popular U.S. stamps, for their size and their breathtakingly detailed, engraved three-color appearance. Issued in denominations of $200 and $500, these stamps facilitated payment of large tax amounts in the wake of the Civil War.

(The profusely illustrated cover story of the September 2015 issue of The American Philatelist, monthly journal of the American Philatelic Society, details the origins and uses of these glorious stamps. The journal is part of APS membership; others may request a sample copy by calling 814-933-3803 or writing to APS, 100 Match Factory Place, Bellefonte, PA 16823.)

Just 76 examples are known of the $500 stamp. The one in the Harmer-Schau sale, used with light circular-cut handstamps but no manuscript cancellation, sold for $16,100 including the 15 percent buyer’s premium levied by Harmer-Schau.

An unusual strip of Fiji postage-due stamps was another notable item in the Harmer-Schau sale at Stampshow. The first postage-due stamps of this Pacific island appeared in 1917 in five denominations, ranging from ½ penny to 4d. In the first print run, the 2d stamps were printed separately, while the other four values were grouped in a single sheet, so that a horizontal row contained three 1d stamps, a ½d, a 4d and three 3d stamps.

The full se-tenant row is listed as Scott J6a. The full, no-gum strip offered by Harmer-Schau, described as the finest in existence, sold for $12,650.

Among the Texas postal history offerings was a cover datelined “GH&H RR, Texas, Confederate States of A.” for the Galveston, Houston and Henderson Railroad, on Mar. 11, 1861. It was franked with a pair of U.S. 3¢ Washington stamps (Scott 26) paying the double rate. (U.S. stamps would not be declared invalid for use in the South until later that year.)

Addressed to Orange County, Virginia, the cover was described as the earliest recorded Texas railroad cover. It sold for $2,300.