A survey of counterfeits, forgeries and other questionable stamps 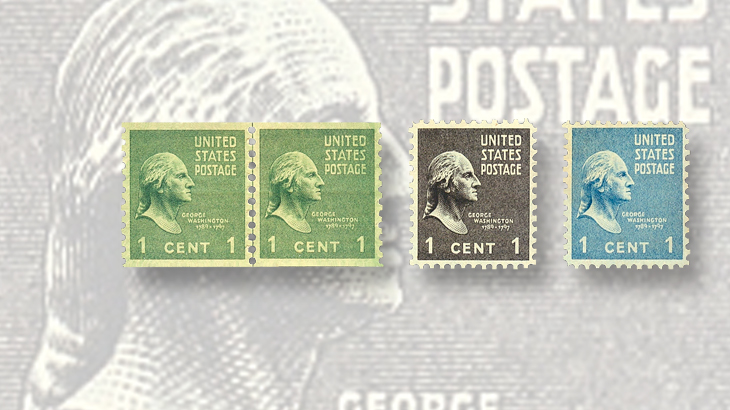 The 1¢ green Presidential coil line pair (Scott 839) on the left is genuine. The other two 1¢ Presidential stamps are deceptive color fakes in black and blue. 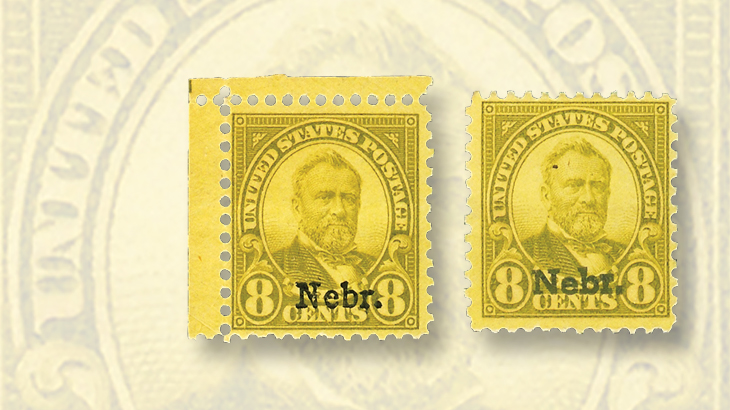 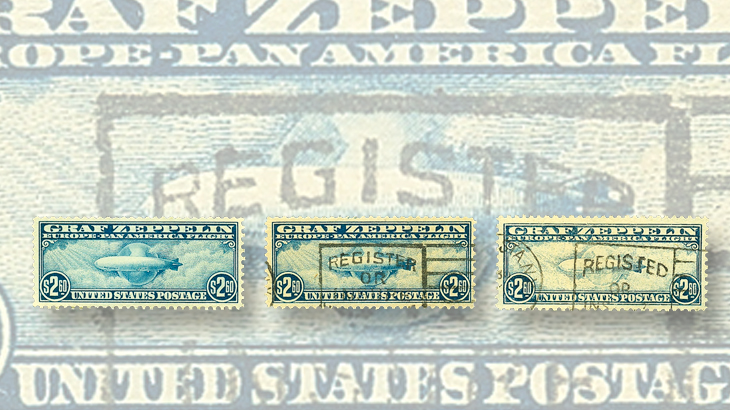 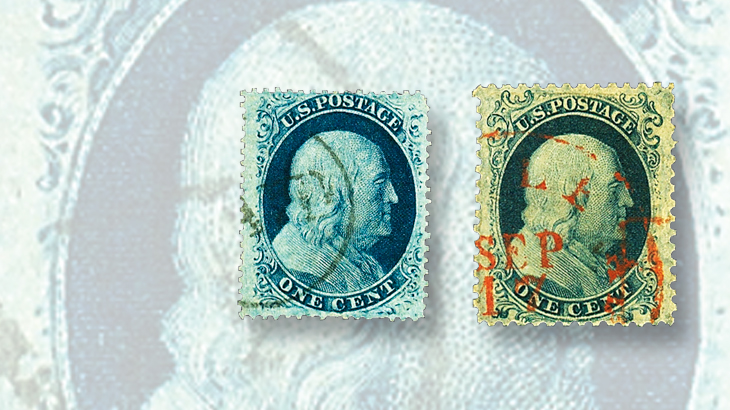 The 1¢ Franklin type V stamp on the right has had design elements painted in to make it resemble the more valuable type I stamp. 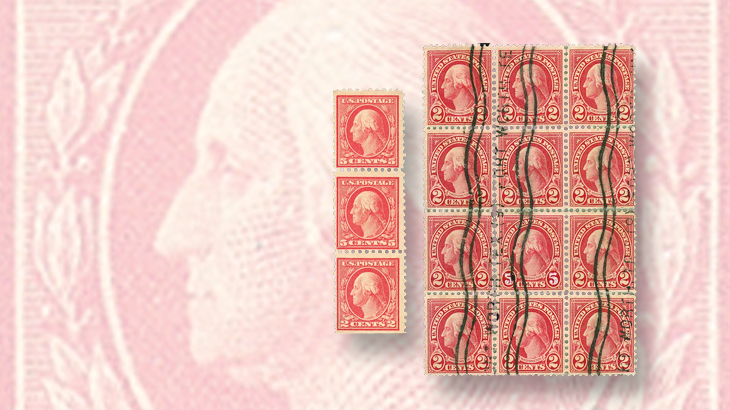 The middle stamp in the second row from the bottom of the block of 12 at right has had a “5” painted in place of each “2” in the denomination tablets, to make it resemble the scarce 5¢ transfer error seen in the middle stamp of the genuine vertical strip of three at left. 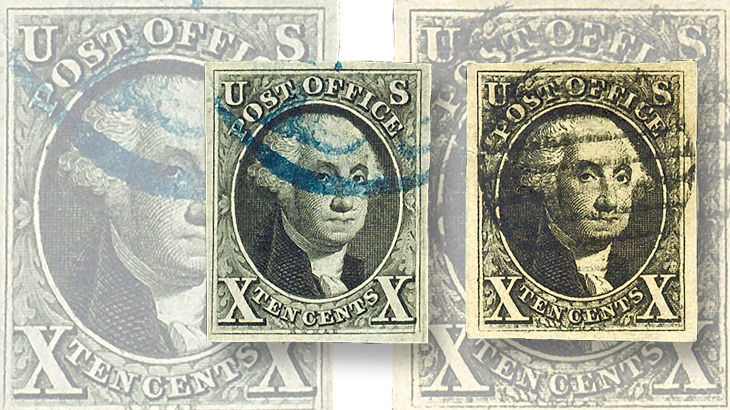 The United States 1847 10¢ Washington stamp on the right is a fake. Author Rich Drews explains how to tell it apart from the genuine stamp on the left. 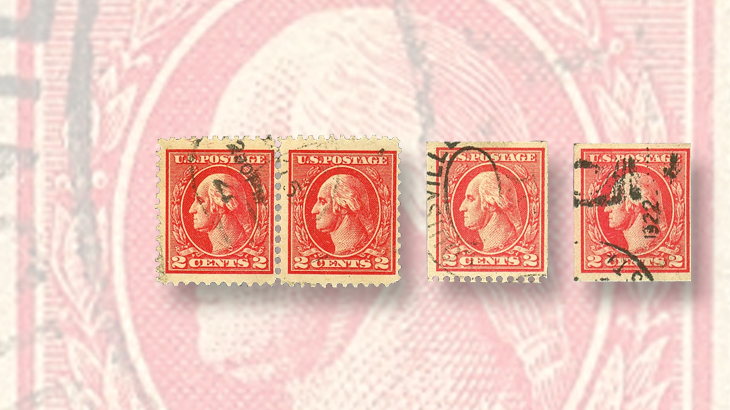 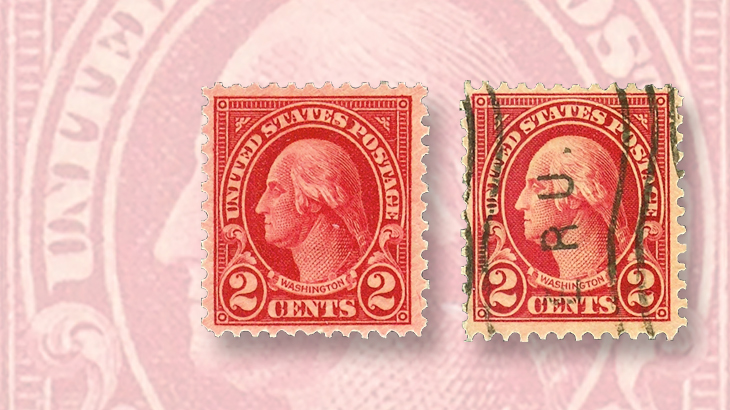 The common 2¢ Washington stamp on the right (Scott 634) has fake gauge 11 perforations on the sides to make it look like the much scarcer Scott 595 that is perforated 11 on all four sides. 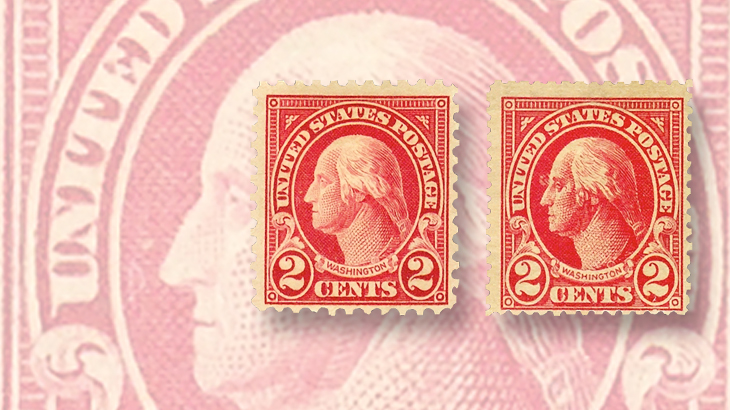 Look closely at the perforations on these two 2¢ Washington stamps. The counterfeit on the right has perforations that gauge 14.1. The genuine stamp, left, has gauge 11 by 10.5 perfs. 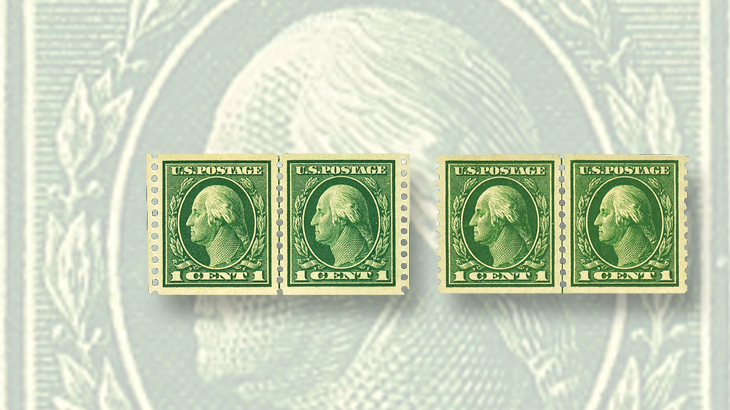 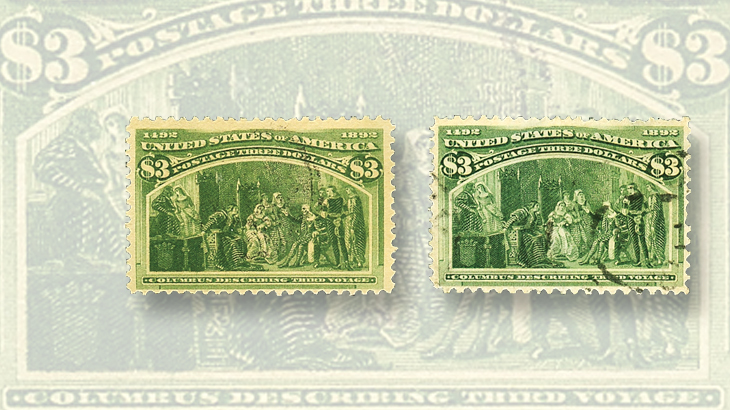 A $3 Columbian proof, right, has been shaved down and perforated to make it look like the genuine $3 Columbian on the left. 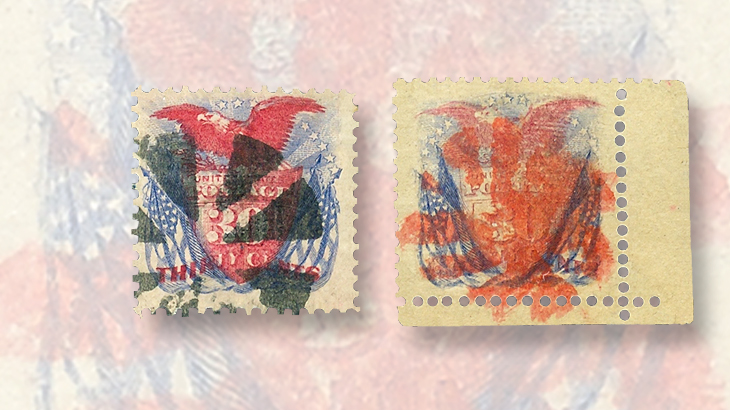 Fake perforations have been fraudulently added to the 1869 30¢ Eagle and Shield stamp on the right, giving it the appearance of a stamp with very uncommon jumbo margins. A genuine unaltered stamp is at left. 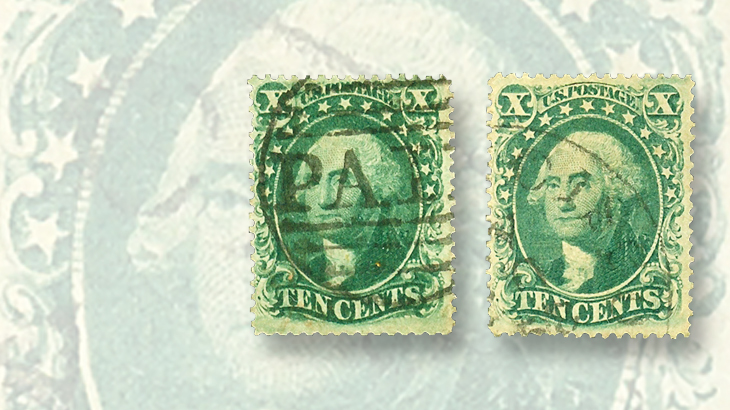 A recut line above “U.S. Postage” was drawn in on the 1857 10¢ Washington type II stamp at right to make it look like the scarcer type IV stamp. A genuine type II stamp is shown on the left.
Previous
Next

Collectors of United States stamps are fortunate: Our classic stamps were engraved and therefore are much more costly to fake than if they had been lithographed or typeset.

There were almost no early efforts to create postal forgeries, just attempts to clean and reuse stamps that were lightly canceled. The few attempts to fake U.S. stamps from scratch were either crudely made and easy to detect, or were made well and in such limited quantities that they are often worth close to what the genuine stamp is worth.

One of our first issues, the imperforate 10¢ Washington of 1847 (Scott 2), was duplicated by the notorious forger Jean de Sperati. The genuine 10¢ Washington stamp shown nearby on the left bears a blue circular datestamp and is valued at $975 in the 2015 Scott Specialized Catalogue of United States Stamps and Covers.

The item next to it bears a black grid cancel and is an excellent fake, based on photolithographic reproduction of a genuine stamp.

You can tell them apart, because the genuine stamp is engraved and the reproduction is printed by lithography. By gently dragging the back of your fingernail over the face of an engraved stamp you can feel the tiny ridges created by the ink, which has been pulled out of the engraved recesses of the printing plate by the slightly dampened paper.

On lithographically printed stamps, a very thin layer of ink is transferred to the paper and will feel smooth to the back of your fingernail.

The forgeries are often signed “Jean de Sperati” in pencil on the reverse, or back stamped “Sperati Reproduction” and numbered. The Sperati forgeries sell for about $500 to $600.

The 1930 $2.60 Graf Zeppelin airmail stamp (Scott C15) was also forged, but this time an engraved stamp was duplicated by engraving.

These forgeries have been attributed to Angelo Panelli, who was known to market them and other forgeries, but it was likely hand-engraved on a copper plate at his request. Illustrated here, left to right, are a genuine unused Scott C15, a genuine used C15, and the engraved forgery with a fake cancel resembling the genuine cancel.

The forgery comes very close to matching the gauge 11 perforations of a genuine $2.60 Graf Zeppelin, but the engraving is weak, especially on the background and the zeppelin in front of the globe.

As a final identifier, on the used examples the cancel says “REGISTED” instead of “REGISTER”.

The forgeries are quite popular and “used” examples sell for $400 to $500, close to the $600 Scott catalog value of the genuine stamp.

The last fake from scratch we’ll look at is a postal counterfeit.

The common 1926 2¢ George Washington with gauge 11 by 10.5 perforations (Scott 634) paid the 2¢ domestic letter rate. The real stamp was engraved, and fakes were produced by offset lithography.

Numerous fake examples were successfully used on mail. The genuine stamp catalogs 25¢ mint, while the forgery sells for about $25 mint and about $500 on cover.

Most of the fakes that collectors will encounter are made by altering existing stamps to resemble more valuable ones. This is accomplished by adding or deleting design elements, adding or changing perforations, or even changing colors or paper.

The 1¢ Franklin type V of 1857 with gauge 15 perfs (Scott 24) can be transformed into a type I stamp (18). A genuine example of Scott 24 with a “PAID” cancel (catalog value: $45) is shown nearby. To its right is a Scott 24 that has had margins added; top, side and bottom design elements painted in; and an existing cancel enhanced to cover some of the work.

The newly created fake Scott 18 with a red cancel now purports to catalog $600. The forger forgot that it was supposed to be perf 15, and instead made this imposter perf 12.

A similar attempt was made to turn an 1857 10¢ Washington type II (Scott 32) into a type IV (34). The faker drew in a recut line at the top, above “U.S. Postage,” but the color is too dark and the shape of the recut line does not plate to any of the known positions. In the illustration nearby, the genuine stamp on the left with a PAID cancel has a catalog value of $220, while the altered example on the right, just described, jumps to a catalog value of $2,100 if genuine.

Another alteration done to defraud collectors is adding margins. The 1869 30¢ Eagle and Shield pictorial stamp (Scott 121) catalogs $450 used, but superb examples with jumbo margins have brought as much as $60,000.

Shown nearby is a genuine 1869 30¢ stamp, left, and an example that has had margins added all around, creating a jumbo lower-right sheet-margin example. Fake perforations have been added, and the cancel has been extended to cover some of the work. The perforations are close to the correct gauge, but they wander slightly, especially at the upper right. The added margins are evident when the stamp is placed in watermark fluid.

Sometimes only a slight difference in the perforation gauge makes a huge difference in value. The common Scott 634 is again a starting point.

Instead of a postal forgery, a perf 11 by 10.5 stamp is reperforated to gauge 11 on the sides, to create a scarcer perf 11 stamp, Scott 595. The catalog value jumps from 25¢ to $375. The genuine stamp and the perf 11 fake are pictured side by side nearby. The Philatelic Foundation determined that the stamp on the right “is a Scott 634, fraudulently perforated 11 at the sides.”

Adding perforations to an imperforate proof has tempted many fakers. A proof is a trial impression created from a die or printing plate before actual stamp production begins.

In this case, a genuine 1893 $3 Columbian with gauge 12 perforations (Scott 243) is faked by taking a card proof (Scott 243P4), shaving it down to close to the thickness of normal stamp paper, and then perforating it on all four sides.

The irregular thickness of the paper from shaving down the card proof is easily detected in watermark fluid. On the $3 Columbian faked from a proof shown nearby, the perfs appear a bit irregular and do not gauge correctly, the color of the proof differs slightly from the genuine stamp, and a cancel has been faked to distract from other aspects of the forger’s work.

A final trick with perforations is to find an oversize perforated stamp and remove the perfs to create a more valuable imperf version of the same design.

Pictured here on the left is a genuine used large-margin pair of the perforated offset-printed 2¢ Washington type Va (Scott 528). Next to it are a used type V (Scott 527) trimmed down on three sides to resemble the scarcer imperf type V (Scott 533). This deception increases the potential catalog value from $1.25 to $125. The last example, on the far right, shows a used perforated type VII (Scott 528B) fully trimmed to resemble the imperf type VII (Scott 534B), with an increase in potential catalog value from 75¢ to $1,400.

On each of the two fakes, one or more of the margins are too small. There is a danger that a large-margined example with a natural straight edge on one side could be used to produce a fake with four good-sized margins.

Fakers also try to create value by adding overprints. The 8¢ Ulysses S. Grant stamp of the Fourth Bureau issue (Scott 640) has a catalog value of $3.20 never hinged, while the addition of a “Nebr.” overprint creates a fake Scott 677 and raises the catalog value to $60.

Often the faker uses a Scott 640 that is too green. Shown nearby is a genuine Scott 677, left, and a fake “Nebr.” overprint on a Scott 640 in the proper olive-green shade. While the fake even has the proper two horizontal gum breakers, the ink is too gray and the letters of the overprint are too thick.

Color is often a factor in identifying and pricing stamps. Color, too, can be altered.

Shown here is a 1¢ green George Washington Presidential coil line pair (Scott 839). To its right are two fake examples of the sheet version of the stamp (804).

The first is black and the second is blue. It’s not too hard to imagine eliminating the fugitive yellow component to create the blue stamp, but more serious chemistry was used to create the black stamp. Not much profit motive here, but with other colors of classic U. S. stamps the difference can be $1,000 or more.

Sometimes the faker just has a brain freeze. The picture nearby shows on the left a valuable vertical strip of three Washington stamps with the misplaced 5¢ transfer in the center stamp. This error exists imperf, perf 10 and perf 11. Blocks can contain one or two examples of the 5¢ error, depending on location.

With six possible choices, the faker picked the least valuable, the single perf 11 error (Scott 505). He then proceeded to use a block of 12 of the 2¢ Fourth Bureau issue on which to carefully paint in a “5” in place of each “2” on the middle stamp in the second row from the bottom. A decent-looking result, but the wrong basic stamp was used, and the bottom margin must be a straight edge, not perforated.

Bottom line: Study your material, know your dealers and get certificates on items where fakery is too easy and tempting.