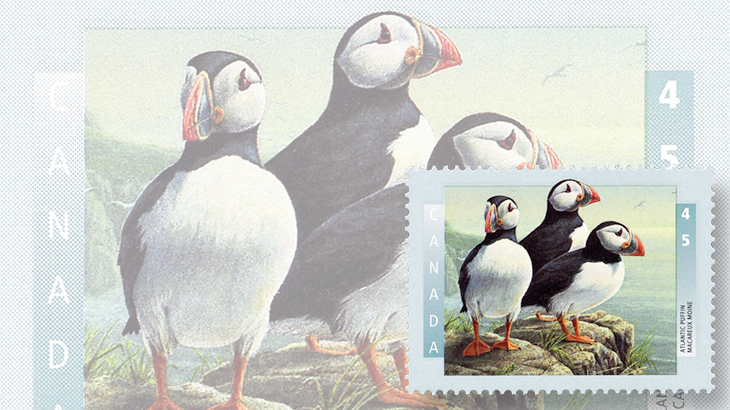 One of the five stamps in a new Birds of Canada series set to debut Jan. 11 was to picture the Atlantic puffin, but the stamps have been postponed indefinitely as has the rate hike for which they were intended. A trio of puffins gathers on this 45¢ stamp 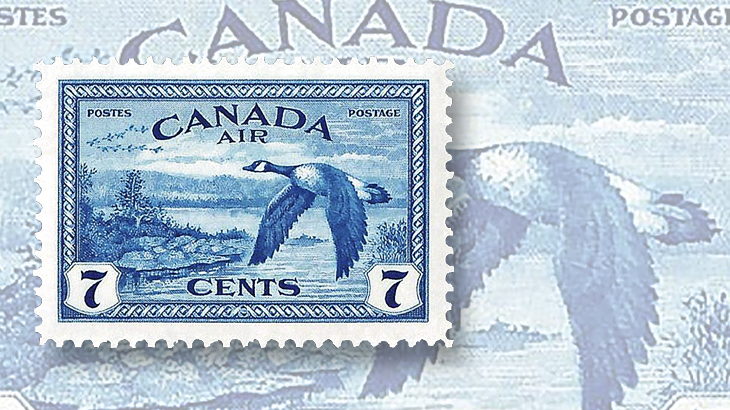 The new Birds of Canada series that was to have taken flight with five new stamps Jan. 11 has been postponed.

News of the postponement came after Canada Post announced Dec. 16 that it would not raise postage rates in January, as originally planned.

The Canada Post press release said: “Increases previously announced in July 2015 will not proceed pending a Government of Canada review of Canada Post, as outlined in the mandate letter for the Minister of Public Services and Procurement. As a result, the current rates for Domestic Lettermail, U.S. and International Letter-post items (letters, cards and postcards destined for the United States and other international destinations) and Domestic Registered Mail will remain in effect for 2016.”

The delay might be a result of the defeat of the Conservative Party in Canada’s Oct. 19, 2015, federal election by Justin Trudeau’s Liberal Party.

The Liberals had run in part on reversing various unpopular Canada Post policies phased in by Steven Harper’s Conservatives, including the gradual elimination of home mail delivery in favor of community mailboxes.

One of the postal policies Harper’s Conservatives filed for last July 11 was a planned rate hike set for Jan. 11, 2016.

It was to have been Canada’s first rate increase since the dramatic and widely deplored leap on March 31, 2014 — an unwanted April Fool’s Day shocker that saw the cost of a basic domestic letter skyrocket 35 percent overnight, from 63¢ to 85¢.

Birds have been popular on Canada’s stamps since a 7¢ airmail stamp showing Canada geese in flight was issued Sept. 16, 1946 (Scott C9).

Three dozen Birds of Canada stamps issued during 1996-2001 accompanied letter rate increases from 45¢ to 47¢, and some designs were used on stamped envelopes as well.

Although no other postponements have been announced, neither has any information been released to confirm the issuance of an estimated nine other stamps that were scheduled to be issued Jan. 11 by Canada Post.

These include five permanent-rate stamps for domestic use reusing the same designs as the $1.20 and $2.50 UNESCO World Heritage booklet and souvenir sheet stamps issued May 16, 2014 (Scott 2739-44); Canada’s second set of Year of the Monkey stamps; and the next new definitive stamp depicting Queen Elizabeth II.

When asked for more information on these planned stamps, a Canada Post spokesperson who has been extraordinarily helpful in providing new-issue details could only say that “there have been some changes recently.”