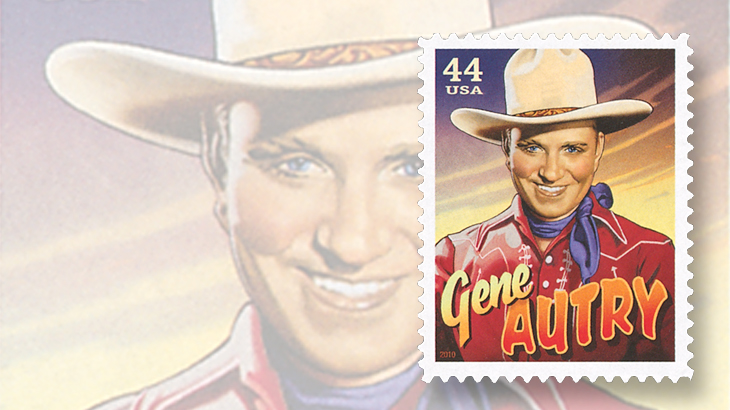 The well-known singer, songwriter, actor and businessman was commemorated on a 44¢ postage stamp on April 17, 2010 — one stamp in a set of four titled Cowboys of the Silver Screen.

Text about each cowboy illustrated was printed on the back of the liner paper for the pane of 20. For Autry, it states:

“Gene Autry (1907-1998) was a successful radio performer before he became the silver screen’s first singing cowboy star in the early 1930s. With his distinctive singing style and easygoing personality, Autry entertained countless fans in nearly 100 films; he also recorded more than 600 songs during his career.”

Autry’s songwriting credits include his signature tune, Back in the Saddle Again. He was also a popular television and radio star.

During World War II, Autry enlisted in the Army Air Corps and became a flight officer for the 91st Ferrying Squadron of the 555th Army Air Base Unit, Air Transport Command.

Over his career Autry earned honors for his multifaceted entertainment career, and is the only individual celebrated with five stars on the Hollywood Walk of Fame, for his contributions to radio, television, recording, motion pictures, and live theater (honoring his rodeo career).

In his later years, Autry was a successful businessman, owning radio and television stations, as well as the Anaheim Angels baseball team of Major League Baseball’s American League.