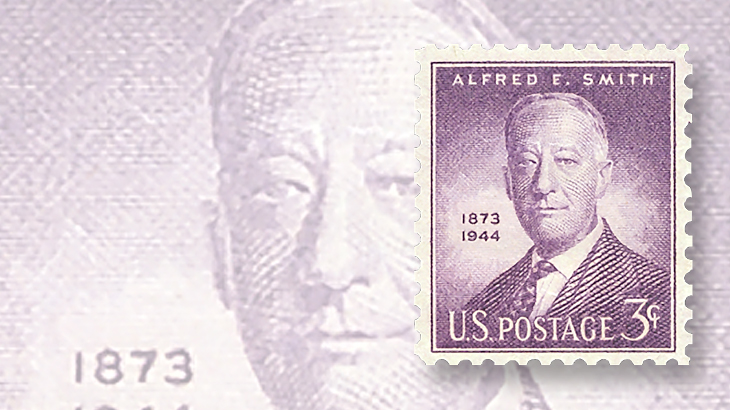 New York Governor Alfred E. Smith was the Democratic Party candidate for president in 1928, as this strip of campaign labels attests. He lost to Herbert Hoover. Smith later was commemorated on a United States postage stamp. 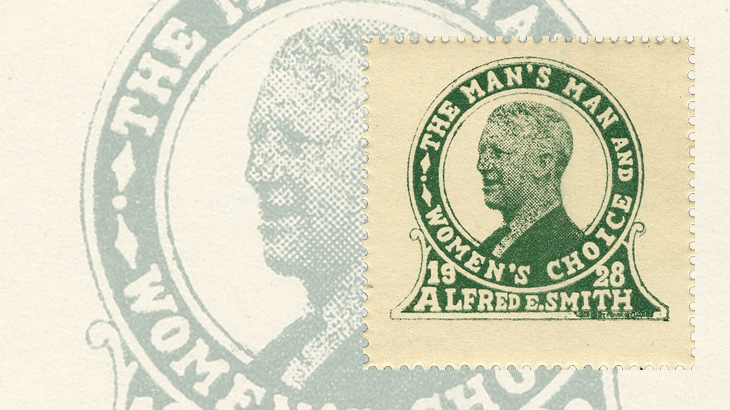 The text around the portrait of Governor Alfred E. Smith in this label reads, “The man’s man and women’s choice.”
Previous
Next

Presidential politics can be endlessly fascinating. These days, an amazing amount of effort and money goes into the process of winnowing dozens of possible candidates down to a small field of contenders on the ballot on election day.

Their appeals to the public for financial support and for votes can sometimes have philatelic connections.

I recently discovered an example from the past in a dealer’s stock. It immediately appealed to me as a window on today’s gender politics, as the slogan around candidate Alfred E. Smith’s portrait reads, “The man’s man and women’s choice.” I don’t see that adorning the literature of any of the present candidates.

His launching pad was the governorship of New York; he served four two-year terms (1919-1920, 1923-28). He was succeeded by Franklin D. Roosevelt, whose presidential aspirations would eventually be more productive.

Given that Hoover went on to occupy the White House during the Wall Street crash of 1929, Smith may have thanked his lucky stars that he had lost.

Smith and Roosevelt contested the Democratic presidential nomination in 1932, and Smith became a lifelong opponent of Roosevelt and his policies — to the point of supporting Republican presidential candidates in 1936 (Alf Landon) and 1944 (Wendell Wilkie).

One can only speculate, given Roosevelt’s control of the stamp program, whether the Smith stamp would have been issued had Roosevelt not died in early 1945.