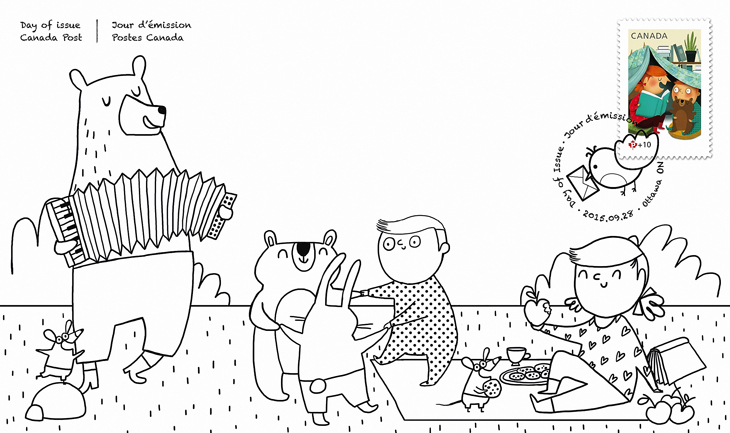 The coloring-book design of Canada Post’s official Sept. 28 first-day cover for its Community Foundation semipostal stamp may encourage some to add a colorful touch of their own. 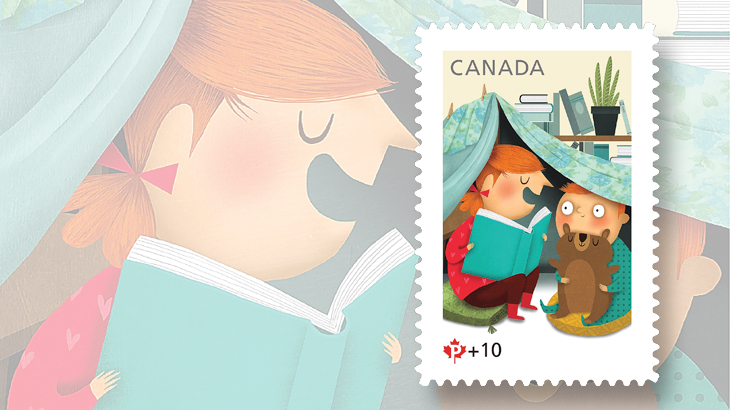 The self-adhesive, nondenominated permanent-rate stamp pays Canada’s basic domestic letter rate, currently 85¢, to which an additional 10¢ surcharge has been added to support the foundation, indicated on the stamp by “+ 10” following the “P” for “permanent.”

In addition, a $1 donation from each booklet of 10 stamps and 10¢ from each Canada Post official first-day cover will go to the foundation to support a wide range of programs to benefit Canadian children and youth.

The foundation’s vision “is to ensure every child in Canada is happy, healthy and surrounded by a community that supports and cares for them.”

After a two-decade hiatus, Canadian semipostals returned in 1996 with a 45¢+5¢ stamp to support literacy in Canada (Scott B13).

A dozen years later, Canada Post launched an annual program of issuing a stamp with the “P+10¢” face value, beginning with a new stamp design each year from 2008-11 for the Canada Post Foundation for Mental Health (Scott B14-B18), superseded in 2012 by the Canada Post Community Foundation (B19-B21).

This year’s stamp was illustrated by Marie-Eve Tremblay of Montreal and designed in Toronto by Context Creative’s Lionel Gadoury, Kammy Ahuja and Joanna Poon.

Canada Post describes this design as depicting “the power of storytelling and the freedom to pretend.” In a secret cave built of bed sheets, clothes pins and imagination, a sister reads a bedtime story to her younger brother, who clutches his teddy bear with wide-eyed delight at the tale.

A thumbnail profile at the website for Colagene, the multimedia agency that has represented Tremblay since 2010, along with a worldwide array of modern illustrators and storytellers, captures something of the Montreal artist’s style and charm: “Her take on the world is full of affection and humor, and her images are set apart by their warm tones, curious candor, and gentle whimsy.”

Canada Post describes its FDC as “reminiscent of a coloring book,” adding that it is designed to bring out the artist in all of us. Grandparents and parents may want to order extras for youngsters to color for themselves.

A total of 1.5 million vertically formatted stamps measuring 24-millimeter by 36mm with simulated perforations were issued in 150,000 self-adhesive 10-stamp booklets; and 8,000 official FDCs were made available, with an Ottawa, Ontario, first-day pictorial cancellation showing a bird carrying a letter. Canada Post order numbers are 413986111 for the 10-stamp booklet, and 413986131 for the FDC.

The stamps were printed by Canadian Bank Note in six-color offset lithography on Tullis Russell paper.

According to the article about the new semipostal in Canada Post’s Details magazine for collectors, the Canada Post Community Foundation has granted $4 million to 325 community projects since 2013 through funds raised through stamp sales, along with donations from Canada Post customers and employees.

A press release from Canada Post earlier this year (March 3) said that the foundation has “helped children with terminal illness go to summer camp and has reduced waiting times for teens seeking mental health support. It has provided therapy dogs for children who have experienced trauma, and contributed to literacy programs to improve the job prospects of disadvantaged youth.

Philatelic products are available at the Canada Post shop. Stamps and FDCs are available by mail order from the National Philatelic Centre, Canada Post Corp., 75 St. Ninian St., Antigonish, NS B2G 2R8, Canada; or by telephone from the United States and Canada at 800-565-4362, and from other countries at 902-863-6550.