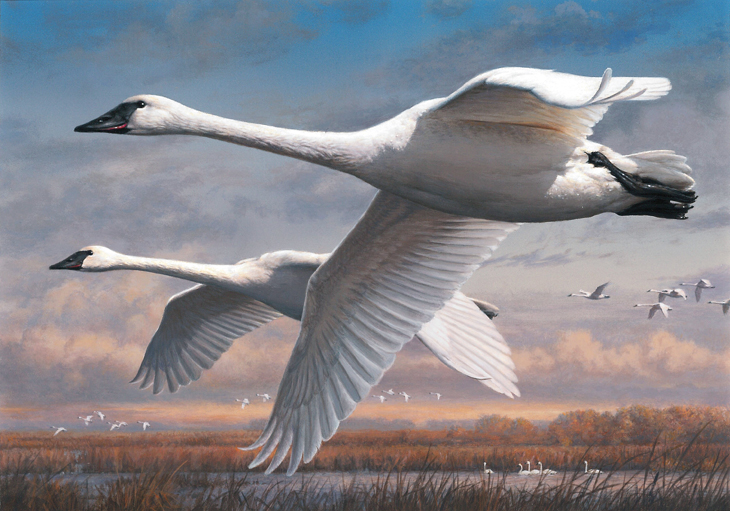 Wildlife artist Joseph Hautman of Plymouth, Minn., has won the federal duck stamp art contest for a fifth time, taking this year’s competition with his acrylic painting of trumpeter swans.

Hautman’s painting will illustrate the 2016 United States federal migratory bird hunting and conservation stamp, which will be issued next summer.

The contest was held Sept. 18-19 at the National Conservation Training Center in Shepherdstown, W.Va.

The Hautman brothers are renowned for their successes in the duck stamp art contest, having won a total of 11 contests among them since 1989, when James Hautman’s black-bellied whistling ducks were chosen for the 1990 $12.50 stamp (Scott RW57).

The duck stamp featuring the winning artwork is issued the year after the contest is held.

Maynard Reece is the only other artist to have his illustration appear on five federal duck stamps.

"I congratulate Joseph Hautman on his win and the entire Hautman family on their artistic talent,” said Jerome Ford, U.S. Fish and Wildlife Service assistant director for migratory birds. “This is not just any piece of art, but one whose impact will be felt for generations to come. Duck stamps have helped to protect more than six-and-a-half million acres of waterfowl habitat in our National Wildlife Refuge System; now that is a lasting legacy.”

Joseph Hautman’s most recent federal duck stamp art contest win was in 2011. His painting of a male wood duck was featured on the 2012 $15 stamp (Scott RW79).

According to the Hautman brothers’ website, Joseph’s artwork has also appeared on state conservation stamps for Arkansas, Connecticut, Minnesota, New Jersey, and Texas.

Hautman also paints other wildlife, “from songbirds and chipmunks to tigers and grizzly bears.”

The only prize awarded to the contest winner is a pane of stamps bearing his design, but the prestige and publicity of winning can promote the sale of prints of the artist’s work.

The federal duck stamp art contest is judged each year by a different group of “noted art, waterfowl and philatelic authorities,” according to the U.S. Fish and Wildlife Service. For the 2015 contest, the judges were Donald Messersmith, University of Maryland professor emeritus, who taught courses in entomology, ornithology and environmental education; James O’Donnell, museum specialist in the Collections Department of the Smithsonian National Postal Museum; Constance Sanchez, director of the Important Bird Areas Program with the National Audubon Society; and artist and author Jonathan Alderfer, the birding consultant for National Geographic Books.

Although federal duck stamps are not valid for postage, they are avidly collected by many individuals who treasure them for the high quality wildlife artwork they feature. The stamps are illustrated and listed as “hunting permit stamps” in the Scott Specialized Catalogue of United States Stamps and Covers and in Vol. 1 of the Scott Standard Postage Stamp Catalogue.

Waterfowl hunters age 16 and older are required to purchase and carry the current federal duck stamp. The current stamp can be used for free admission to any national wildlife refuge that charges an entry fee.

The U.S. Fish and Wildlife Service reports that 98 percent of the proceeds from sales of the federal duck stamp go to the Migratory Bird Conservation Fund, which supports the purchase of migratory bird habitat for the National Wildlife Refuge System.