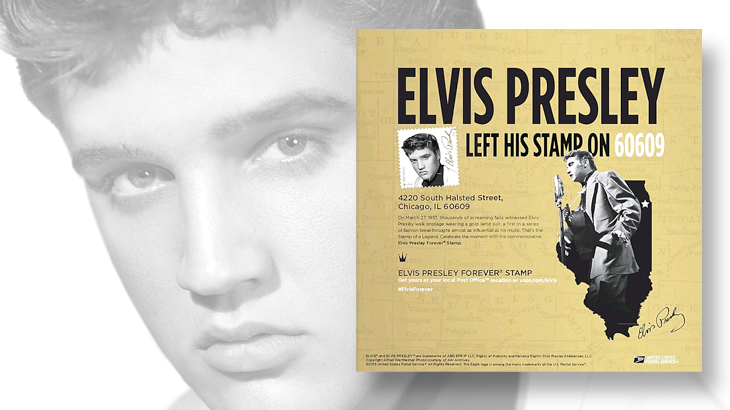 A square advertisement with gold background promoting the new Elvis Presley forever stamps appeared in the Aug. 31 issue of the Chicago Sun-Times.

A square-shaped ad with gold background that appeared in the Aug. 31 Chicago Sun-Times is shown here. The ad is specific to Chicago, making a connection between Presley and the address “4220 South Halsted Street, Chicago, IL 60609.”

That’s the former site of the International Amphitheatre, where Presley gave a concert in 1957 wearing, for the first time, his gold lamé suit.

The ad shows Presley with his guitar against a black state outline of Illinois with a white star over Chicago.

Text on the ad reads, “On March 27, 1957, thousands of screaming fans witnessed Elvis Presley walk onstage wearing a gold lamé suit, a first in a series of fashion breakthroughs almost as influential as his music. That’s the Stamp of a Legend.”

Special thanks to Linn’s reader Neal Miller for bringing the USPS ad series to our attention.