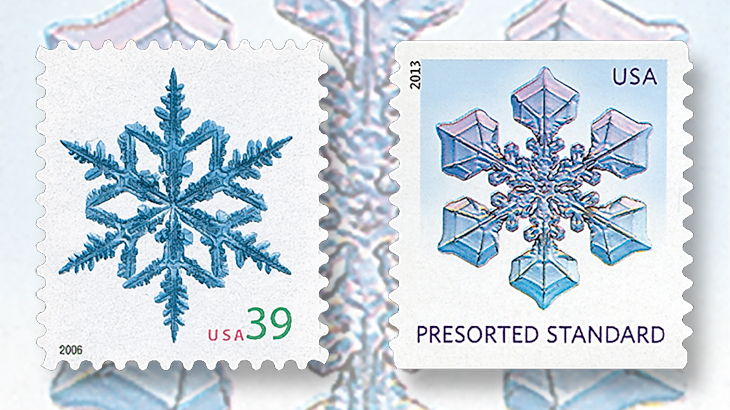 Two stamp sets featuring snowflakes as a central design were issued in recent years: a 2006 set of four (left) and a 2013 set of five coil stamps. One stamp from each set is shown. 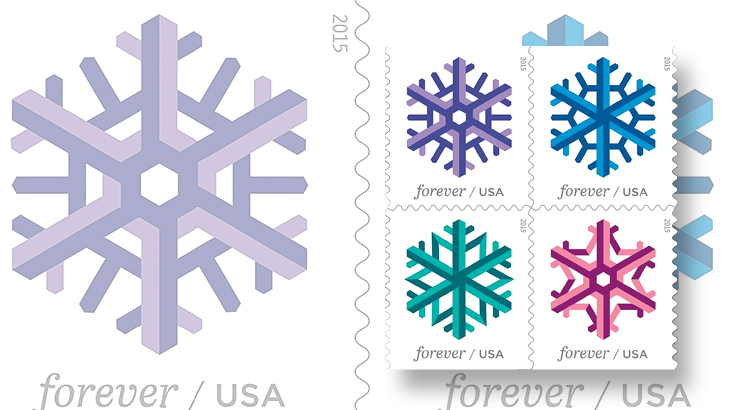 Four colorful Geometric Snowflakes forever stamps will be issued in double-sided panes of 20 on Oct. 23. The stamps are designated as part of the United States Postal Service’s Holiday Celebrations series. 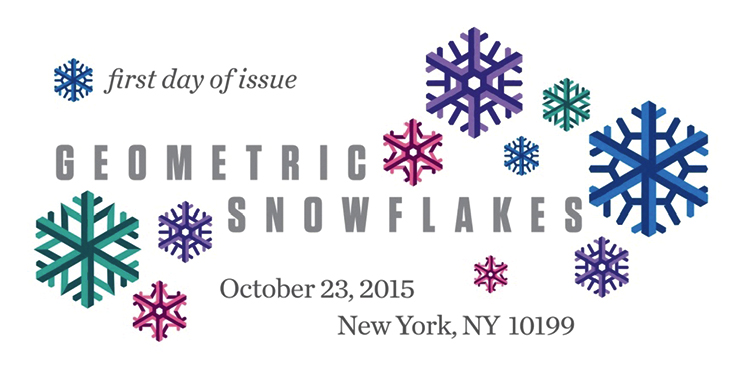 The digital color postmark for the Geometric Snowflakes issue includes small snowflakes similar to those depicted on the four postage stamps.
Previous
Next

A set of four Geometric Snowflakes forever stamps is the final scheduled United States issue of 2015. The stamps will go on sale Oct. 23 in a double-sided pane of 20.

Each stamp shows a colorful illustration graphically representing the geometric patterns of a different single snowflake.

The snowflakes are each drawn in one of four colors: purple, pink, green or blue.

The stamps are this year’s second and final issue in the U.S. Postal Service’s Holiday Celebrations series. The first holiday stamps, in a set of 10, showed scenes from the 1965 television special A Charlie Brown Christmas, and were issued Oct. 1.

The Friday first-day ceremony for the Geometric Snowflakes stamps will take place at the New York Hilton Midtown, 1335 Avenue of the Americas, in New York City. The 11 a.m. event is part of the American Stamp Dealers Association’s New York Fall Postage Stamp Show 2015, taking place Oct. 23-25 at the Hilton.

The new stamps make up the third set in seven years to feature single large snowflakes as the central vignette.

The most recent set, from 2013, consists of five designs alternating in coils. The nondenominated (10¢) presorted standard stamps also feature photographs by Libbrecht (Scott 4808-4812).

The new stamps turn away from photographs to use the artistic creations from Alcala and Badani.

Badani is a 2007 graduate of Corcoran College of Art and Design and has designed exhibitions, catalogs and marketing materials for the National Gallery of Art, National Postal Museum, Textile Museum, Walters Art Museum, Smithsonian Books, and AIGA, among many others, according to the Postal Service.

Badani has been associated with Alcala’s Studio A design firm.

Alcala has been a USPS art director since 2011. He is an adjunct faculty member of Corcoran College.

According to the Postal Service, the two artists previously collaborated on the Elvis Presley forever stamp issued Aug. 12 (Scott 5009).

A black four-bar New York, N.Y., first-day cancel will be made available for this issue. The Postal Service will also sell its own first-day covers with a digital color postmark decorated with illustrations resembling the snowflakes that appear on the stamps.

Press sheets for this stamp set contain six panes (120 stamps) and sell for $58.80, the face value of the forever stamps on the sheet.

Technical details for the Geometric Snowflakes forever stamps, as well as first-day cancel ordering information, are presented below.

Standard ordering instructions apply. Collectors requesting first-day cancels are encouraged to purchase their own stamps and affix them to envelopes. The first-day cover envelopes should be addressed for return (a removable label may be used), and mailed in a larger envelope addressed to Geometric Snowflakes Stamps, Special Events Coordinator, 380 W. 33rd St., New York, NY 10199-9998. Requests for first-day cancels must be postmarked by Dec. 22.

The Postal Service’s uncacheted first-day cover set of four with black postmark is item No. 680416 at $3.72. USPS order numbers for stamps and FDCs also appear in Linn’s 2015 U.S. Stamp Program.