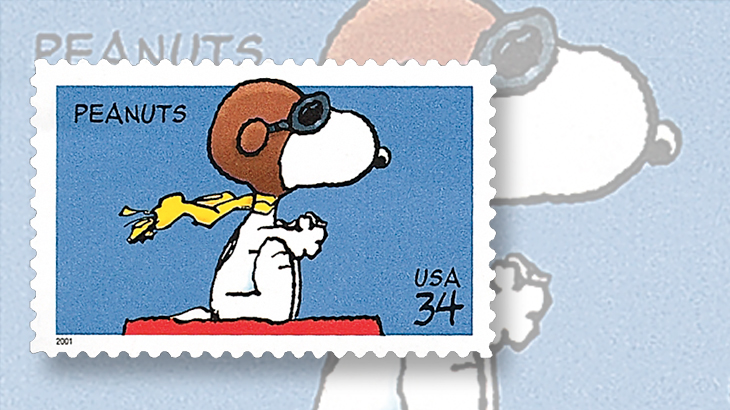 A United States stamp showing Snoopy from the Peanuts comic strip was issued in 2001. 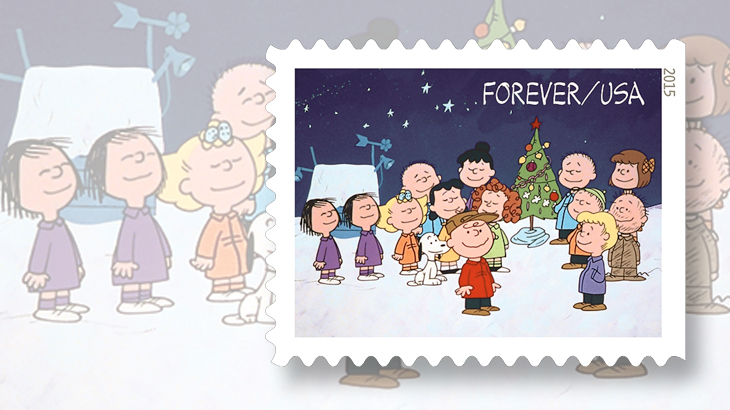 Characters from the television special A Charlie Brown Christmas enjoy a little holiday fellowship in the scene on this new forever stamp, part of a set of 10 designs to be issued Oct. 1. 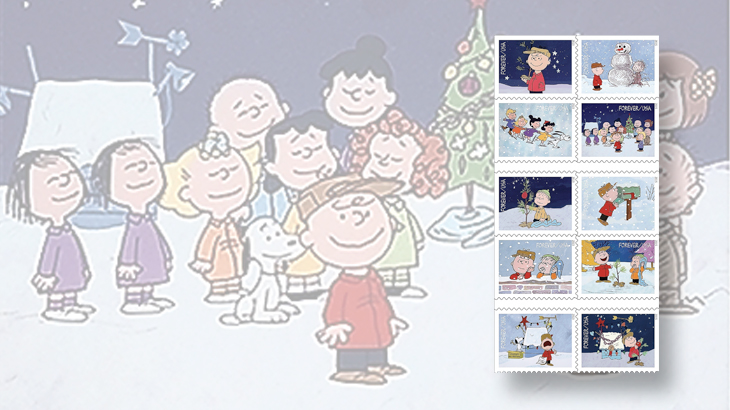 The A Charlie Brown Christmas stamp set is being issued in a double-sided pane of 20 stamps. A first-day ceremony will take place at the Charles M. Schulz Museum in Santa Rosa, Calif.
Previous
Next

For the second consecutive Christmas season, the United States Postal Service is drawing from an animated television special for the subject of its holiday forever stamps.

This year, Americans will see 10 different stamps commemorating A Charlie Brown Christmas, the popular family program that was first televised 50 years ago. The stamps are being issued in a double-sided pane of 20, with two stamps of each design.

The new A Charlie Brown Christmas stamps will be issued Oct. 1 at the Charles M. Schulz Museum in Santa Rosa, Calif.; the event is free and open to the public.

The characters on the stamps and featured in the television special are all from the Peanuts comic strip and books developed, written and drawn by Charles M. Schulz (1922-2000).

The Peanuts strip first appeared in seven newspapers on Oct. 2, 1950, so the new stamps also commemorate the 65th anniversary of the beloved feature.

The story line of the long-running comic strip follows the youngster Charlie Brown and his adventurous beagle Snoopy through their amusing day-to-day experiences. Peanuts is also populated with a large number of supporting characters, including know-it-all Lucy and her younger brother, the blanket-toting Linus; Schroeder, an accomplished pianist (on his toy piano) and catcher for the neighborhood baseball team; Peppermint Patty, a spirited soul who regularly calls Charlie Brown “Chuck”; Woodstock, a carefree yellow bird who associates most closely with Snoopy; Sally, Charlie Brown’s little sister; the aptly named Pig-Pen, who is perpetually soiled with dirt and dust; and many others.

A Charlie Brown Christmas was the first of more than 40 animated television specials featuring the Peanuts characters. It was first broadcast Dec. 9, 1965, on the CBS network. It now airs each year on ABC.

The 25-minute program begins with Charlie Brown discouraged by the commercialism of Christmas, and looking for a better way to celebrate the holiday. Though the other characters are initially immune to his concerns, they later work together to help restore his hope for a meaningful Christmas.

The new stamp set is the second from the United States to feature characters from the Peanuts family. The first was a single 34¢ stamp showing Snoopy on top of his doghouse, in his recurring fantasy role as a World War I flying ace in search of his nemesis, the Red Baron (Scott 3507). The Snoopy stamp was issued May 17, 2001.

Along with the new double-sided panes of 20, the Postal Service will offer two varieties of press sheets, each for $78.40 and containing 160 stamps (eight panes). There will be 500 sheets made with die cuts, and 1,500 sheets without die cuts.

The stamps are offset-printed by Banknote Corporation of America for USPS contractor Sennett Security Products, and were designed by USPS art director Antonio Alcala using stills from the 1965 television program.

Technical details and first-day cancel ordering information for the A Charlie Brown Christmas stamps are listed below.

Standard ordering instructions apply. Collectors requesting first-day cancels are encouraged to purchase their own stamps and affix them to envelopes. The first-day cover envelopes should be addressed for return (a removable label may be used), and mailed in a larger envelope addressed to A Charlie Brown Christmas Stamps, Special Events, Box 7838, San Francisco, CA 94120-7838. Requests for first-day cancels must be postmarked by Nov. 30.