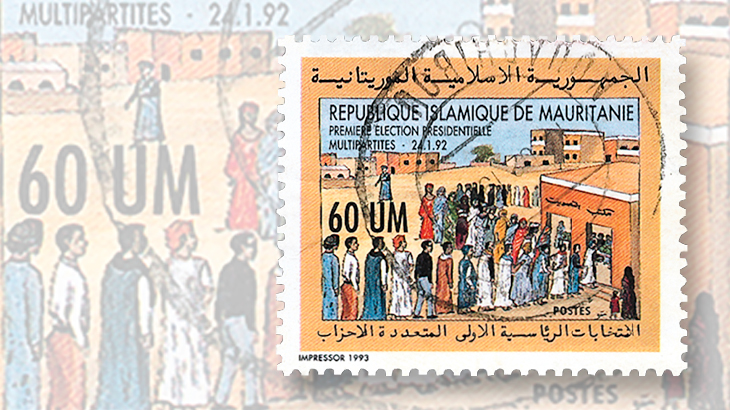 Look for the 1993 Mauritania 60-ougulya First Anniversary of the First Multiparty Presidential Election stamp (Scott 706B). 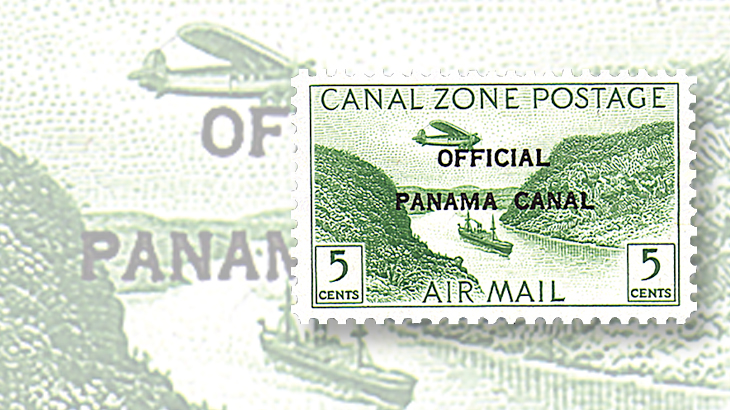 The 1941 Canal Zone set of seven airmail Official stamps (Scott CO1-CO7) is a good buy in mint never-hinged condition at the 2015 Scott Specialized Catalogue of United States Stamps and Covers value.
Previous
Next

The Islamic Republic of Mauritania lies in the Maghreb region of northwest Africa.

The 11th largest country in Africa, with a population of roughly 3.5 million people, about 90 percent of its land area lies within the Sahara Desert. The base population is ethnically Berber, but Arab warriors conquered the land between the 11th and 17th centuries, and Arabs now form the top strata of society.

Through a series of alliances with local tribal leaders and minor conquests of those who resisted, France asserted dominion over Mauritania by 1901. French colonial authorities issued the first stamps in 1906. Desultory fighting continued with various tribes until 1912.

Mauritania declared independence from France on Nov. 28, 1958, although it was not formally recognized until 1960.

Although French authorities had abolished slavery and suppressed the slave trade, it quickly re-emerged with the departure of the French. According to some estimates, about 600,000 people, roughly 20 percent of the population, are enslaved today. There are racial elements involved because most of the slaves are either black Africans or Berbers.

As the country’s name informs, the population is uniformly Sunni Muslim. There is heavy pressure on the non-Arabic elements of the population to adopt Arab language and culture.

Most collector interest in Mauritania is a holdover from its status as a former French colony. In 1993, Mauritania issued a two-stamp set to commemorate the first anniversary of the first multi-party presidential election. The 2016 Scott Standard Postage Stamp Catalogue lists the 60-ougulya stamp (Scott 706B). In a note after the listing, the Scott editors say that they would like to examine the other stamp in the set.

The 60um stamp was issued for use as postage and was not advertised to dealers and collectors, who only became aware of it when used examples started showing up in kiloware. The Scott catalog values the stamp in mint never-hinged condition at $25 with the value in italics. It does not value the stamp in used condition.

We can’t find this stamp on offer anywhere. If you see the stamp offered in mint never-hinged condition it should be worth at least Scott catalog value, if not more.

Used examples are probably more readily available, but they are likely worth at least as much as the Scott catalog value for a mint stamp.

The Canal Zone was abolished Oct. 1, 1979, and the land returned to Panama.

The American administration issued stamps for use on mail from the Canal Zone from 1904 until the territory was abolished.

Mint stamps were not sold to the public until they were made available for three months beginning Jan. 2, 1952. Prior to that, stamps sold to the public were canceled with a parcel post rotary cancel with “Balboa Heights, Canal Zone” between two wavy lines.

The 2015 Scott Specialized Catalogue of United States Stamps and Covers values the set of seven airmail Official stamps in mint never-hinged condition at $94.

A mint set without bad gum skips or creases is worth full catalog value. A canceled-to-order set, mint with never-hinged gum, is valued at $31.50. Postally used examples sell for more.

For a real challenge, look for examples of these stamps used on cover. If you find one, it won’t be cheap.