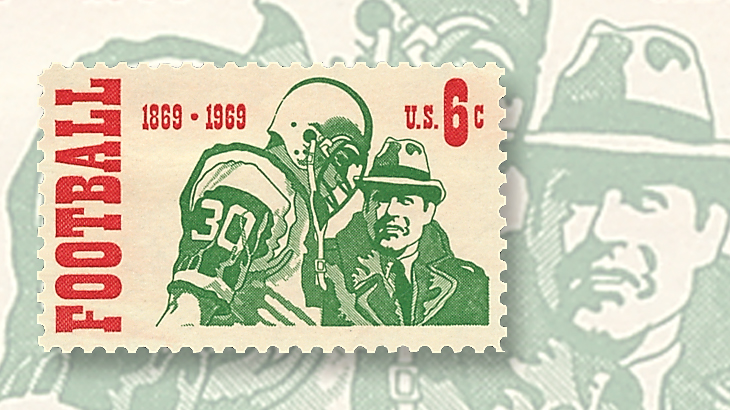 The cartoon caption contest for October is the 1969 6¢ Intercollegiate Football stamp depicting a coach and a player. Picture yourself in one of these roles, and tell me what you might be thinking or saying about your season so far. The rules to enter the

I like to call this time of year the hopeful season for the sports teams I follow. Despite not doing so well last year, my college and professional football teams looked better in the preseason. My basketball teams had good recruiting off-seasons. My pro baseball team is in second place and surging.

Yes, the sports section of the daily newspaper is a pure pleasure to read. That probably won’t be the case at some point in the future. But hope springs eternal.

So, to represent this hopeful season, I am using the 1969 6¢ stamp marking the 100th anniversary of intercollegiate football for the October cartoon contest. The design depicts a football player and coach.

Put yourself into the picture and tell me what you think the coach, the player, or both of them might be saying or thinking — whether it is an excuse; an expression of elation; or a commentary on stamp collecting, sports culture, politics, or anything else.

Put your entry (or entries) on a postcard if possible and send it to me, John Hotchner, Cartoon Contest, Box 1125, Falls Church, VA 22041-0125, or e-mail it to jmhstamp@verizon.net. Be sure to include your mailing address.

For each winner, the prize will be the book Linn’s Stamp Identifier, published by Linn’s (a retail value of $12.99), or a 13-week subscription to Linn’s (a new subscription or an extension). To be considered for a prize, entries must reach me no later than Oct. 26.