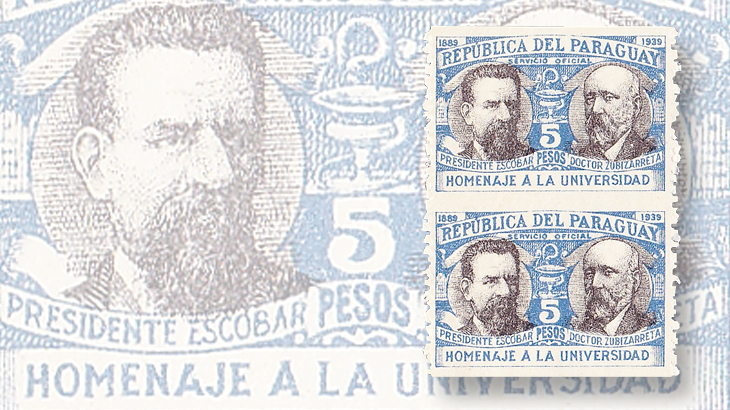 There are several perforation varieties for the University of Asuncion design type, including imperforate horizontal, as on this 5-peso Official stamp of 1940. 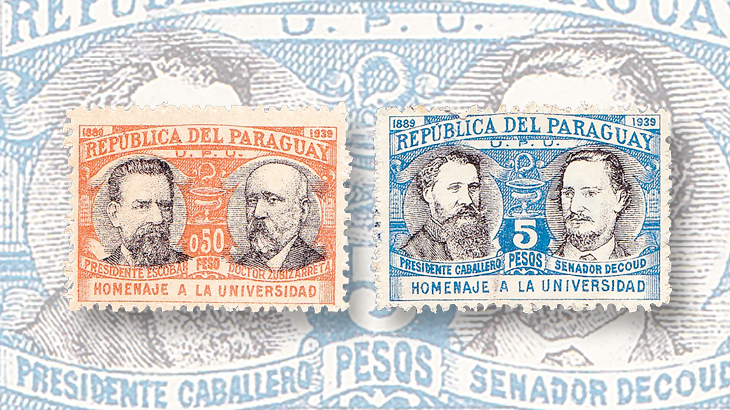 The 50-centavo (0.50 pesos) lowest-denomination stamp honoring the 50th year of Paraguay’s national university, in 1939 (left), paid the printed-matter rate to the Americas. This stamp and the 1-peso and 2p stamps of the set picture Patricio Escobar and Ramon Zubizarreta, president of Paraguay and first university rector, respectively. The high-denomination stamp of the 1939 definitive set (right) depicts President Bernardino Caballero, founder of the university’s law school, and Jose Segundo Decoud, a key figure in the university’s origins.
Previous
Next

Paraguay’s oldest university was established in 1889 during the presidency of Patricio Escobar. The large-format stamps are in two colors: black for the vignette and a different color for the frame of each denomination. The stamps were lithographed by the Talleres de Valores Oficiales in Asuncion.

Among President Escobar’s other accomplishments during his term in office were the establishment of the national library and initiating obligatory primary education.

Pictured with Escobar at right in the design is Dr. Ramon Zubizarreta (1840-1902), who was the first rector of the new university.

The 5p denomination is the only stamp in the set with a different design, with a portrait of Gen. Bernardino Caballero, president of Paraguay from 1880-86, on the left. During his first two years in office, Caballero offered a general amnesty to Paraguayans who had emigrated for political reasons.

Caballero founded the university’s school of law as well as more than 70 rural schools, and encouraged immigrating Germans and Swiss-Germans to establish an agricultural colony, called San Bernardino. He was ably seconded by Jose Segundo Decoud, a government minister and major figure in organizing the new university. Decoud’s portrait appears opposite that of Caballero on the 5p stamp.

The Scott Standard Postage Stamp Catalogue lists the stamps as being perforated gauge 11½, while the specialized Catalogo de los Sellos Postales de la Republica del Paraguay, edited by Victor Kneitschel, cites both gauge 11 and 12, as well as gauge 11 by 12.

Most values also have inverted-center varieties. These, too, may be contrived, and a note in the Scott Standard catalog warns, “Examples with inverted heads were not officially issued.” The American Philatelic Expertizing Service issued a certificate of genuineness for an inverted-center example in 2005.

While the ordinary stamps are commonly found used, I have never seen any of these varieties in other than mint condition.

The number of used examples available of these issues indicates that the stamps experienced a considerable amount of service, though covers are somewhat more difficult to find. Too many stamps were soaked from their envelopes to serve the packet trade.