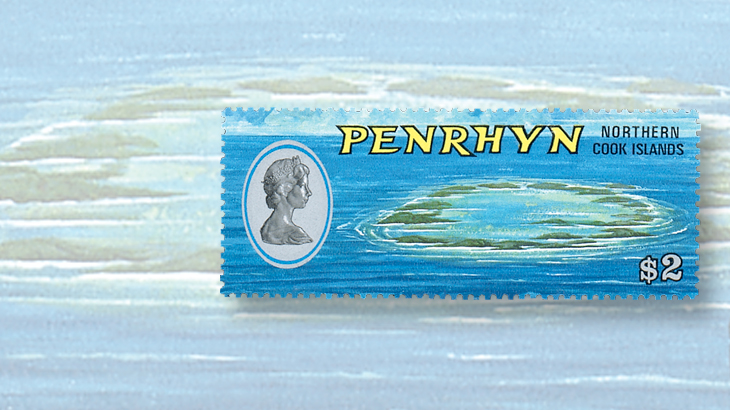 An aerial view of the Penrhyn atoll on this 1974 Penrhyn/Northern Cook Islands stamp shows the island’s coral ring and central lagoon. 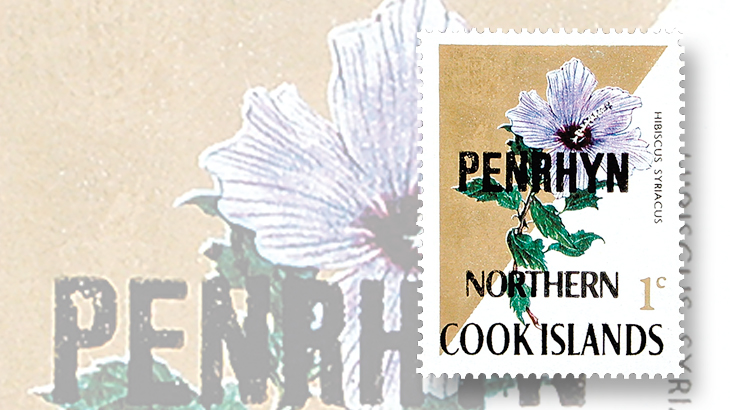 In 1973, Cook Islands stamps were overprinted with the inscription “Penrhyn/Northern/Cook Islands” for use in Penrhyn. 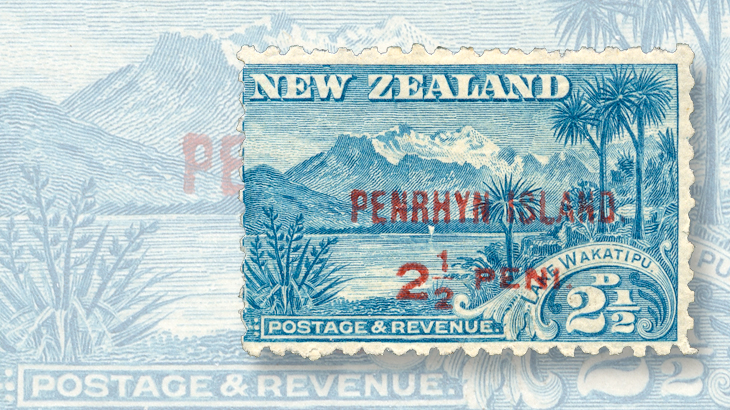 The Penrhyn surcharge on the 2½d Wakatipu stamp of New Zealand comes in carmine or vermilion ink, and the two colors have different catalog numbers. This is an example of the carmine overprint. 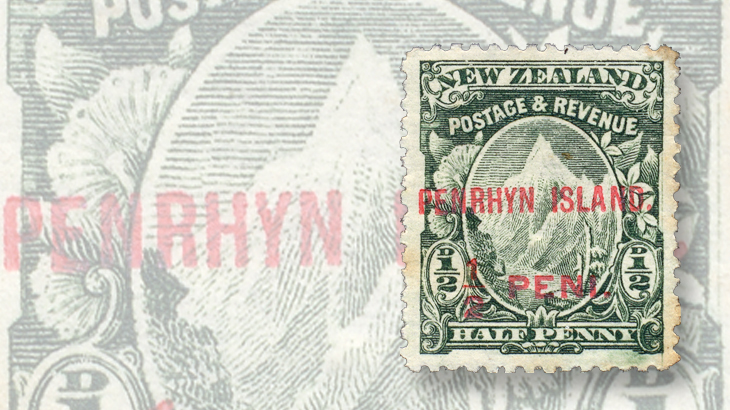 Penrhyn Island’s first stamp, New Zealand’s ½-penny Mount Cook stamp overprinted and surcharged for use in Penrhyn, was issued in 1902. 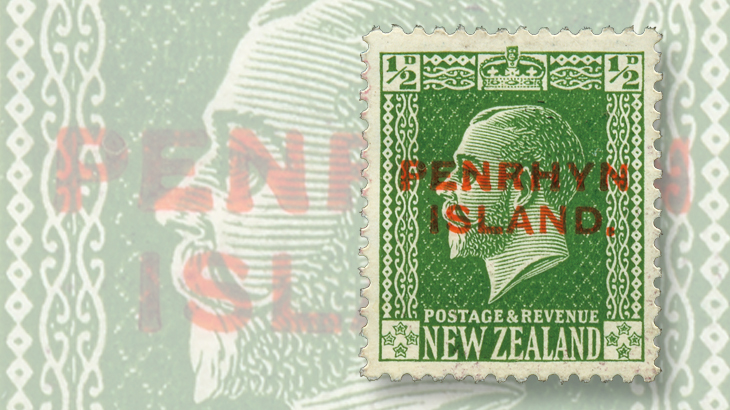 New Zealand King George V stamps received overprints for use in Penrhyn Island in 1917, but no surcharges. The denominations were not altered. 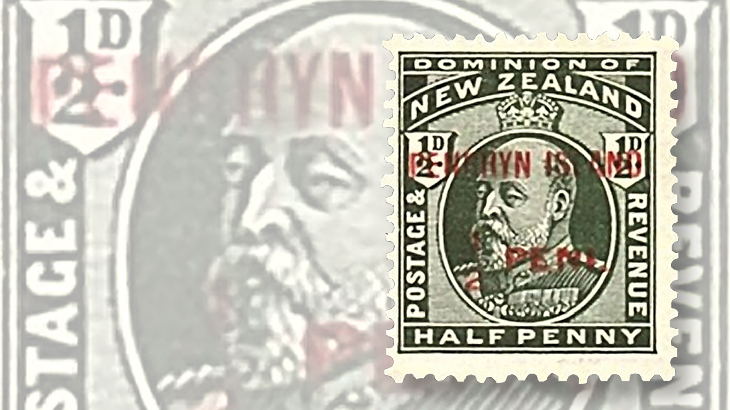 Three denominations of New Zealand’s King Edward VII issues were surcharged for Penrhyn in 1914. Missing punctuation (periods at the end of the overprinted words) adds to the value of these issues. 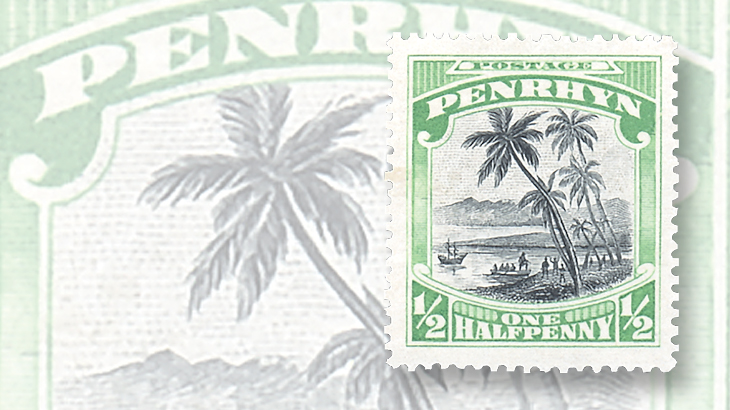 One of a set of six common-design issues in 1920 for some of the Cook Islands, this ½d Penrhyn Island stamp recalls the landing of Captain Cook.
Previous
Next

Penrhyn is the northernmost and largest of the 15 islands within the Cook Islands range. In common with the other islands in the Cook group, Penrhyn’s small population is primarily of Polynesian heritage.

The island got its name from the Lady Penrhyn, a British ship built in 1786 as a slaver, but whose first voyage transported convicts to New South Wales. The ship landed on Penrhyn in 1788 after leaving the prisoners in Australia.

The Polynesian name for the island is Tongareva, roughly translating to “south of the empty space,” and there certainly is not much land to be found north of Penrhyn for many, many nautical miles.

Technically, Penrhyn is an atoll. Forty-eight miles of coral in a thin circle make up the habitable surface of the island. Within the circle is a large lagoon, with one small village, Omoka, on the west side, and another small village, Te Tautua, on the east side.

New Zealand began surcharging some of its own postage stamps to be used specifically on Penrhyn Island. The first of the surcharges (“PENRHYN ISLAND” and denominations in “peni”) were issued May 5, 1902. The New Zealand stamps that were overprinted were the ½-penny Mount Cook (Scott 170), the 1d Penny Universal (99), the 2½d Wakatipu (73), the 3d Huica birds (75), the 6d Kiwi (78), and the 1-shilling Kea and Kaka birds (81).

In consideration of the low population of Penrhyn Island, the dispatch of the surcharged stamps to Penrhyn was limited to fewer than 5,000 in each denomination.

Collecting these early Penrhyn Island stamps requires careful examination of the New Zealand stamps, as well as checking watermarks and the gauges of perforations.

For example, Penrhyn Island Scott 1 (shown nearby), the surcharged ½d Mount Cook stamp, has a watermark that is described as “Double-lined N Z and Star” (Watermark 63) in the Scott Classic Specialized Catalogue of Stamps and Covers. The overprint on this stamp is carmine.

Penrhyn Island Scott 5 also has the ½d Mount Cook image, but it is a different New Zealand stamp, with what Scott calls a “N Z and Star Close Together” watermark (Watermark 61).

Finding all the surcharge varieties on these stamps is a challenge. Most involve the lack of a period after the words “ISLAND” or “PENI” within the overprint. The different colors of the surcharges and printing varieties can be hard to find, but the missing periods are easy to spot.

Keep a lookout for the lack of periods, because stamps without them have significantly more value than those with the proper punctuation.

The Penrhyn surcharge on the 2½d Wakatipu stamp has two different Scott numbers: Scott 8 and 9. Scott 8, with a carmine surcharge, is shown here. Scott 9 has a vermilion surcharge, once again causing difficulty in differentiating it from carmine.

To make life a little easier for collectors, these stamps have no watermark, so the missing punctuation at the end of “ISLAND” or “PENI” is what requires investigation.

In 1914, three denominations of the New Zealand King Edward VII stamp were surcharged for use in Penrhyn.

The denominations were ½d (Scott 130), 6d (137) and 1 shilling (139). These stamps also have missing-punctuation varieties that add to their value. Pictured nearby is a Penrhyn Island ½d King Edward VII surcharge (Scott 13).

In 1917, eight denominations of New Zealand’s King George V stamps received overprints for use in Penrhyn Island. The country-name overprint on the ½d stamp (Scott 17) is illustrated here. Notice that with this issue of overprinted stamps there is no surcharge: the denomination in New Zealand currency printed on each stamp is left as is.

Shown nearby is the Penrhyn Island ½d stamp depicting the landing of Captain Cook (Scott 25).

Three additional common-design stamps were issued for Cook Islands entities in the 1920s, including Penrhyn Island. On March 15, 1932, stamps inscribed Cook Islands were used in all of the Cook Islands.

In 1973, Cook Islands stamps were overprinted with the inscription “Penrhyn/Northern/Cook Islands” (the example shown here is Scott 35). In the following year, new definitive stamps were issued for Penrhyn Island.

The last stamp pictured is the $2 denomination from 1974 that has an aerial view of Penrhyn atoll, with its ring of coral and lagoon in the center (62).

Since then, Penrhyn has issued many beautiful stamps, most of which have island themes. It is not so difficult to complete a collection of Penrhyn Island stamps, including the early, more expensive ones as well as the later Penrhyn Northern Cook Islands stamps.

You can keep current with the new issues by contacting the Cook Islands Philatelic Bureau.