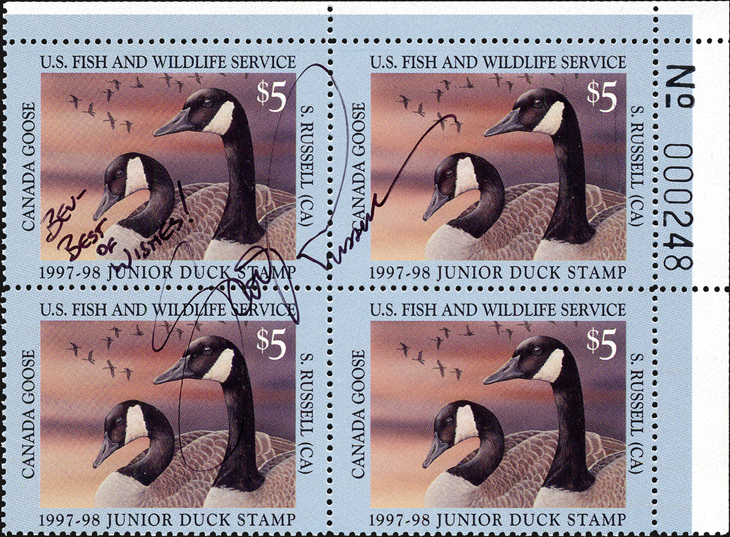 Signed by artist Scott Russell, this plate block of four of the 1997 junior duck stamp is offered by Sam Houston in its Sept. 19 public auction with an estimate of $1,900. 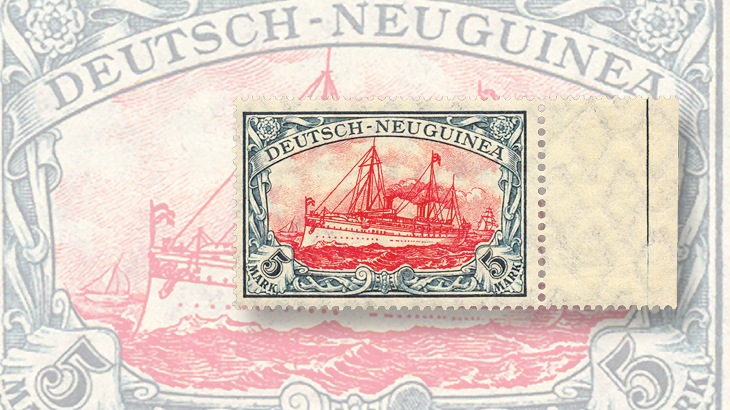 Sam Houston Philatelics will offer stamps with scarce varieties from Germany and German colonies in its next public auction on Sept. 19.

The sale is being held in conjunction with the Greater Houston Stamp Show, which takes place Sept. 18-20 at the Humble Civic Center in Humble, Texas. The sale also features United States material and the firm’s signature specialty, U.S. duck stamps.

Many of the German-area varieties in the sale are unlisted in the Scott Standard Postage Stamp Catalogue, but may be found in the Michel Deutschland-Spezial specialized catalog published by Schwaneberger Verlag of Germany.

One such stamp is the 5-mark Kaiser’s Yacht Hohenzollern stamp, printed in 1914 for the German colony of New Guinea (Scott 23). Due to the outbreak of World War I and the seizing of German overseas territories by Allied forces, these stamps, like most German colonial issues after 1914, never made it to their intended place of use and were sold only at the philatelic bureau in Berlin.

However, German collectors bought these stamps enthusiastically, and they were reprinted in 1918. Some of the reprints differ subtly from the originals; the so-called peacetime and wartime printings are beyond the scope of the Scott catalog, but are priced separately in Michel.

A variety of German New Guinea Scott 23, with 26 perforation holes across the top and bottom and 17 down the sides, is listed under the complex Michel system of sub-letters and Roman numerals as 23 I A I. Called the Friedensdruck or peacetime printing, it is worth roughly twice as much as the later Kriegsdruck or wartime printing, which shows 25 perf holes by 17 perf holes.

In very fine, never-hinged condition, the example in the Sam Houston sale is offered with an estimate of $275.

Another scarce item is a German South West Africa stamp in a rare shade.

The first issue for this colony, which eventually became present-day Namibia, was made by taking definitive stamps of Germany and overprinting them “Deutsch-Sudwest-Afrika” diagonally.

The Scott catalog recognizes and values six distinct shades of the underlying 3-pfennig stamp of 1889 (Germany Scott 46 to 46f). Four of the shades appear with the German South West Africa overprint, issued in 1897.

One, the reddish-brown shade (German South West Africa Scott 1c) is so hard to find that it is not valued in either the Scott or Michel catalogs. Sam Houston estimates the mint, never-hinged example in their sale, which is signed on the back by two German experts, at $1,000.

A scarce shade of a World War II-era issue prepared by the Allied Military Government occupying Germany is also being offered.

A series of stamps in a simple design with a central Gothic “M” in an oval, inscribed “AM Post Deutschland” with denominations in the upper corners, was prepared in 1945 by the Bureau of Engraving and Printing in Washington, D.C., and later reprinted in London and in Brunswick, Germany. The printings can be distinguished thanks to subtle differences in paper, perforations, shades and, in the case of unused stamps, gum.

There are study circles devoted to the A.M.G. stamps, and Joseph Bush, a longtime dealer in A.M.G. stamps, prepared specialized album pages for many of the varieties.

Only one shade of the 40pf stamp from the Brunswick printing is listed in the Scott catalog (deep magenta, Scott 3N15), but Michel’s specialized catalog lists four shades, of which Sam Houston is offering an example said to be the scarcest, reddish lilac (Michel 30 d B z).

The marginal single is mounted on a Joseph Bush album page, with text that indicates this to be a relatively late discovery by members of the A.M.G. Study Group in Germany.

The album page also shows a scan of an expert’s certificate attesting to the shade. The stamp is estimated at $1,700.

Duck stamps have been issued every year since 1934 by the U.S. Department of the Interior as a way of raising money for wetlands preservation. The first issue had a face value of $1; this year, the government raised the price to $25, after having left it at $15 since 1991.

Although they are revenue stamps, duck stamps’ gorgeous reproductions of waterfowl paintings have earned them a place at the back of American stamp albums for generations. Collectors can even order current duck stamps through the U.S. Postal Service.

In recent decades, the federal duck stamp program has expanded to include limited-edition souvenir sheets and junior duck stamps, not valid for hunting, that promote conservation awareness among youth.

A mint plate block of four of the 1997 junior duck stamp, signed by the artist Scott Russell, is described as a “very rare stamp” and offered with an estimate of $1,900.

Full auction listings are on the firm’s website, as well as at Stamp Auction Network. A printed catalog can be obtained by contacting the firm at 1-800-231-5926 or by sending an e-mail to catalog@shpauctions.com.

Lots can be viewed in person by appointment at the Sam Houston Philatelics retail store at 14780 Memorial Drive No. 110, Houston, TX 77079, or by visiting the Greater Houston Stamp Show on Friday, Sept. 18.

The firm adds a 15 percent buyer’s premium to the hammer price of all lots.