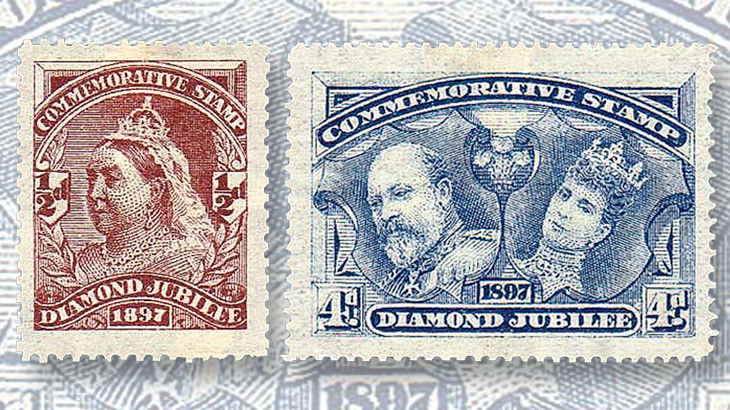 Stamp dealer Wallace Brothers produced a set of seven labels as commemoratives of Queen Victoria’s diamond jubilee. The two labels shown have denominations of ½ penny and 4d. However, even though the designs show denominations, they had no postal validity. 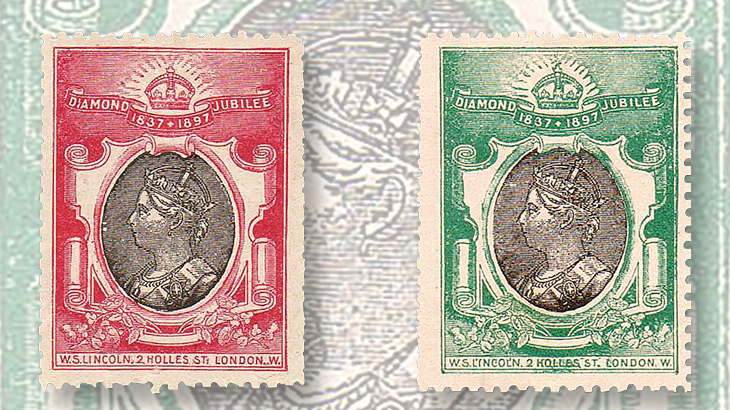 These two labels are part of a set of four that London stamp dealer W.S. Lincoln produced and gave away as souvenirs of Queen Victoria’s diamond jubilee (60 years of reign). 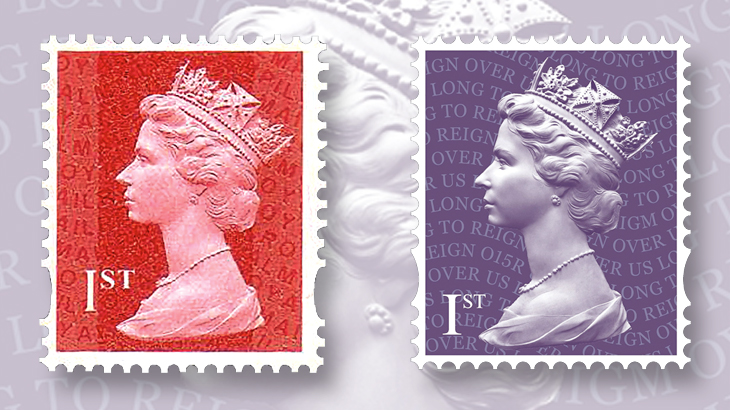 On Sept. 9, Royal Mail changed the color of Britain’s most common postage stamp from red to purple, to mark Queen Elizabeth’s reign as the longest of any British monarch.

This souvenir sheet of five stamps was issued Sept. 9 to mark the milestone of Queen Elizabeth becoming the longest-reigning British monarch in the history of the United Kingdom of Great Britain and Northern Ireland.
Previous
Next

The new color will be available for the next year to mark Elizabeth’s distinction as the British monarch having reigned the longest over the United Kingdom of Great Britain and Northern Ireland.

In 1897, when Queen Victoria topped the longest reign until then, that of George III of 59 years (1760 to 1820), the post office did nothing special to note the milestone.

To have souvenirs of Victoria’s diamond (60-year) jubilee, collectors need to rely on cinderellas (stamplike labels) produced by stamp dealers to mark her record reign.

Shown nearby are two labels produced by W.S. Lincoln, a well-known London stamp dealer and, at that time, the largest stamp dealer in the world.

The labels come in four colors: blue, purple, red, and green. They bear no denomination and had no postal validity; they were likely given away as souvenirs of the jubilee.

Another stamp dealer, Wallace Brothers, produced a set of seven commemorative labels with different denominations ranging from ½ penny to 6d. Shown here are two labels from the set. The ½d label pictures Queen Victoria, and the 4d pictures her son Albert, then prince of Wales, later King Edward VII, and his wife Alexandra.

The seven labels, despite having what appear to be postage denominations in their designs, had no postal validity and could not be used to mail anything. They were sold by the stamp dealer initially for 1 shilling 6d and then for 2sh6d, and he kept the profits.

The post office requested that the labels stop being sold because the public began using them on mail, depriving the post office of its rightful revenue.

For example, the post office issued a souvenir sheet with the first-class stamp in the new purple color and four additional commemoratives, two in plum at the first class rate (currently 63p) and two £1.52 denominations, which pay the rate to Europe for letters weighing up to 100 grams.

Some pre-issue publicity illustrations of the souvenir sheet, including the mock-up on the cover of the September issue of the British Philatelic Bulletin mistakenly show the two high-value stamps as £1.33 denominations.

For the new Machin, the color wasn’t the only change. The iridescent security overprint appearing across the background behind the queen’s profile was changed from “ROYAL MAIL” to read “LONG TO REIGN OVER US.”

Also, the date code location was moved: “O15R,” instead of the word “OVER,” indicating the stamps were printed in 2015, is located just under the queen’s chin instead of in front of the diadem.

Another piece of information embedded in the iridescent security overprint is the source code, which indicates the format the stamp comes from.

The new purple Machin stamp was produced in four formats: sheets of 50 (two panes of 25), the aforementioned souvenir sheet, booklets of six, and in a composite booklet pane with two World Rugby Cup stamps.

Sheet stamps have no source code.

The source code on the water-activated stamp from the souvenir sheet is “M” (for miniature sheet) and is located on the right at the bottom of the queen’s hair.

On the stamp from the booklet of six, the “S” source code for “six” is located behind the queen’s hair in the iridescent overprint word “[REI]GS.” The upper-right inverted U-shaped security die-cut slit cuts through the code letter “S,” making this code difficult to discern.

The four Machins in the Rugby World Cup booklet issued Sept. 18 each have the source code “C” for “custom” behind the queen’s hair. Once again, this source code also is punched by the U-shaped security die cut.

Definitives stamps sold in the business sheet format and stamps produced for large-size items meeting the price-in-proportion rate scheme will not likely appear in the purple color. Also, booklets of 12 might not be issued in purple.

While the post office ignored Victoria’s diamond jubilee, Royal Mail went all out for Elizabeth II.