Stamps from a little-known Polynesian paradise: Wallis and Futuna 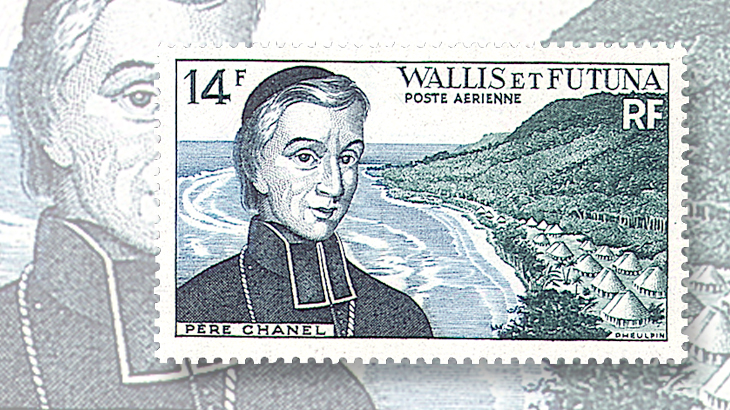 St. Peter Chanel, a martyred priest of Futuna, was honored on an airmail stamp in 1955. 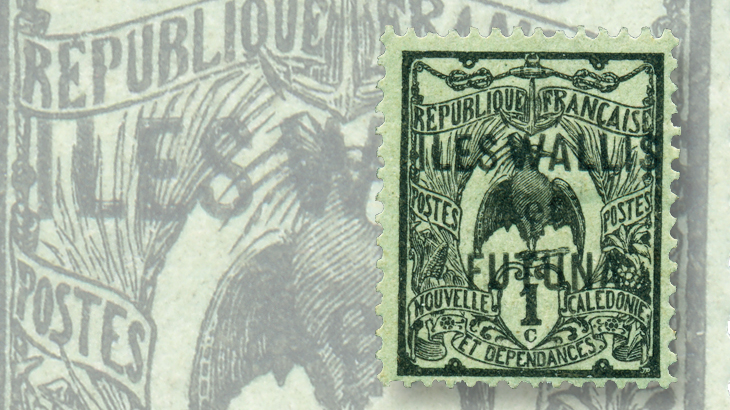 The first issue of Wallis and Futuna is an overprinted New Caledonia stamp. 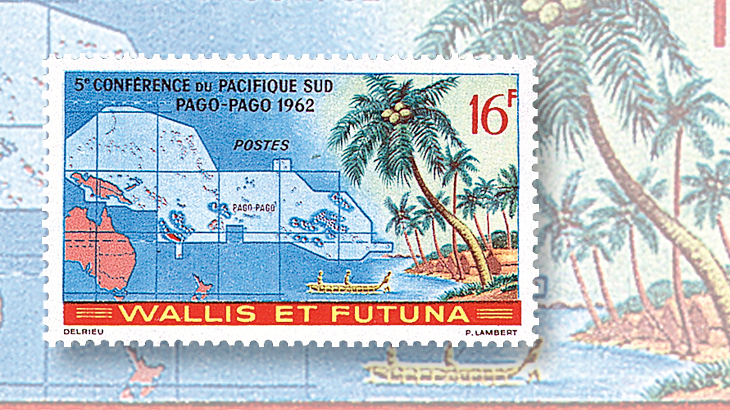 The location of remote Wallis and Futuna, an island group in the South Pacific, is plotted on this 1962 16-franc Map stamp. 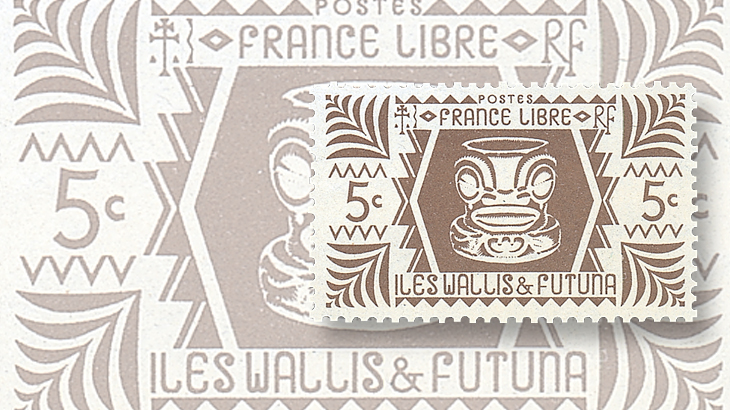 Wallis and Futuna’s first stamp with its own name and a unique design was issued in 1944.

A strip of three stamps shows the Dutch navigators who came upon Futuna and Alofi islands in 1616.
Previous
Next

Wallis and Futuna might be the least-known islands in all of the South Pacific. Well off the beaten track, remote Wallis and Futuna’s nearest neighbors are Fiji (346 miles southwest) and Samoa (405 miles west).

Wallis (also known as Uvea) Island and Futuna Island are about 100 miles apart. There are 23 islands within Wallis and Futuna, all but three of them uninhabited.

The islands of Futuna and Alofi were discovered by Dutch navigators Willem Schouten and Jacob LeMaire in 1616. They named them Hoorn Eylanden, after Schouten’s birth city, Hoorn, in the Netherlands.

A strip of three stamps from 1986 (Scott 340) commemorates the 370th anniversary of the explorers’ discovery of Hoorn Islands, depicting Schouten and LeMaire and a map of Futuna (also known as Alo) and Alofi islands. In 1767, the Cornish explorer Samuel Wallis, aboard the HMS Dolphin, discovered the island that now bears his name.

Wallis and Futuna became a French protectorate in 1842, and that status was formalized in 1887. In 1961, the islands became a French overseas territory, gaining the opportunity for self-government.

Today the Territory of the Wallis and Futuna Islands has a population that hovers around 15,000, most of whom are Polynesian.

Marist missionaries brought the Catholic faith to Wallis and Futuna in 1837. One of the priests, Father Pierre Louis Marie Chanel, became a martyr for the cause in 1841 on Futuna Island and was canonized by the Catholic Church in 1954.

Several stamps have been issued for Father Chanel, now known as St. Peter Chanel; the earliest one (shown here) in 1955 (Scott C12). Today almost all of the islands’ population retains the Catholic faith.

Few people travel to Wallis and Futuna because getting there is neither cheap nor easy. There are direct flights from New Caledonia and Fiji, but the fares are high. Once a traveler arrives, there are few hotels, and they, too, are very expensive. Armchair travel enabled by Wallis and Futuna stamps is certainly the least expensive and easiest way to explore these remote islands.

Prior to the release of these overprinted issues, regular stamps of New Caledonia were used in Wallis and Futuna.

In the 1930s, French colonial common-design stamps were issued for use in Wallis and Futuna.

It wasn’t until 1944 that the islands released their first uniquely Wallis and Futuna stamps (Scott 127-40), depicting an ivi po’o (small bone cylinder) carved with a tiki.