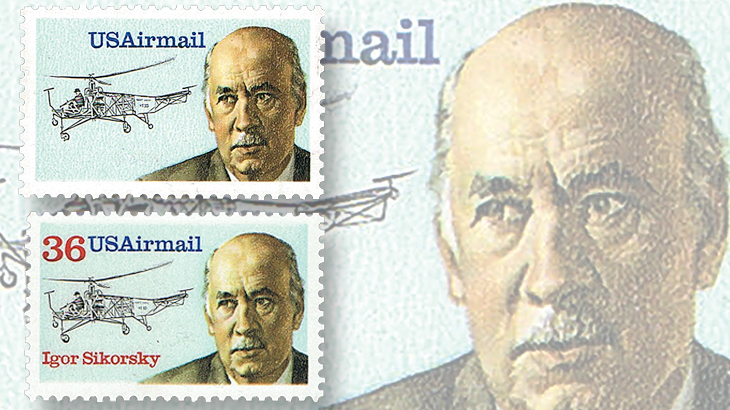 At top is a 1988 36¢ Igor Sikorsky airmail stamp (Scott C119) missing almost all of its engraved red color. No red is visible until the stamp is looked at under magnification. Compare it to the normal example shown at bottom. 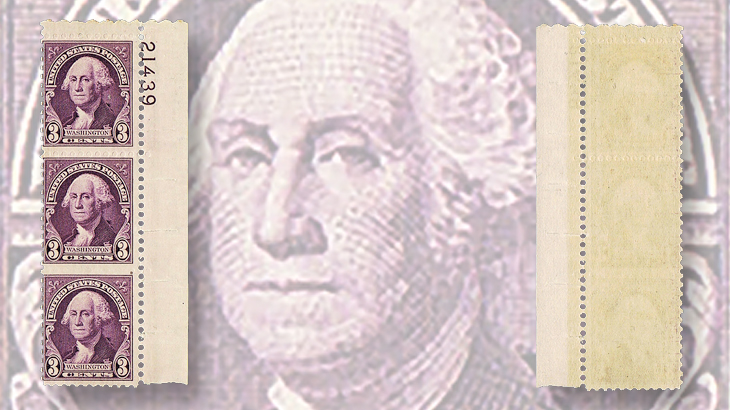 From the front, this strip of 1932 3¢ Washington stamps (left) looks like a possible bottom pair imperf between, which has a Scott listing, No. 720c. A careful review of the back (right) discloses one perforation hole, which makes it an “almost imperf,” but you will never see that terminology used on a certificate.
Previous
Next

I often receive questions that go something like this, “There is a nice pair of stamps I have that is almost imperf and I think I should get it expertized as such.” Or sometimes the writer says that the stamp is missing almost all the black, or another color.

This is problematic because the definition of an error is that it must be complete or it will not be certified and will not get a Scott listing.

In fact, if an “almost” is submitted, it will be expertized as “not the error.” There is no such entry on an expertizing form that says “almost” anything; it is or it is not the error.

A seller may use the “almost” language to hype the item, but it isn’t an expertizing term, and if that is what a submitter wants to hear, he will be disappointed.

An example is the vertical strip of 3¢ Washington by Gilbert Stuart stamps shown nearby. The Scott U.S. Specialized catalog lists as No. 720c a vertical pair, imperforate between, with a catalog value of $700 mint and $1,350 used. (The used value is for an example with a contemporaneous cancel. You could not buy a mint example and send it through today’s mail to make it the more expensive piece.)

No matter how much you might wish that the hole would disappear, it is there forever, and the bottom pair will not pass inspection. There is no point in submitting the strip for expertization.

In the August expertizing column, I mentioned the 1988 36¢ Igor Sikorsky airmail stamp (Scott C119) with almost all of the red missing. A couple of readers asked why the stamp was not shown. Fact is I could not find my example, but it has surfaced, and is shown nearby, together with a normal example.

The stamp is another “almost.” There is no red visible, even under 10-power magnification.

But under 30-power magnification, red dots can be seen in the area of Sikorsky’s signature.

Scott does not list a red-omitted error of this stamp, but it does list an error in which the engraved red, blue and black are entirely omitted. Only the portrait of Sikorsky is present, on the sky blue background.

The Scott Catalogue of Errors on U.S. Postage Stamps (16th edition, 2014) by the late Stephen R. Datz, notes the visually missing red, with this language: “No. C119, the Sikorsky 36c airmail stamp, is known with the red engraved inscription omitted in varying degrees. However, red specks (visible under magnification) are present on all stamps seen to date, so it is not considered to be a true 100% color-omitted error. Nevertheless, it is considered a collectible variety: price $125 to $150, depending on the degree of red omitted.”

That is as close to an “almost” listing as a stamp will get, but, if submitted for expertization, it will still receive a certificate saying it is not an engraved red-omitted error.