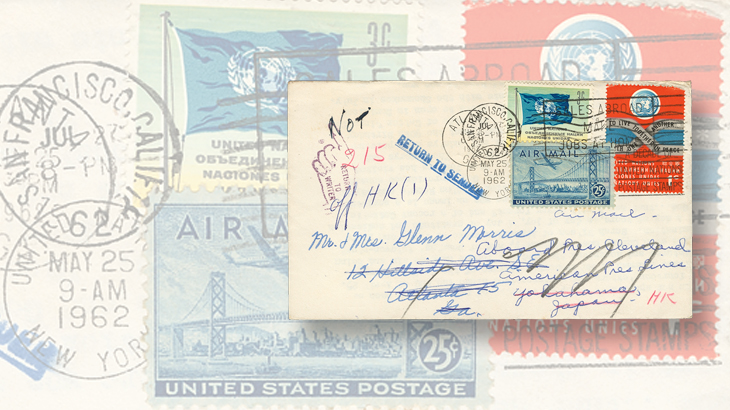 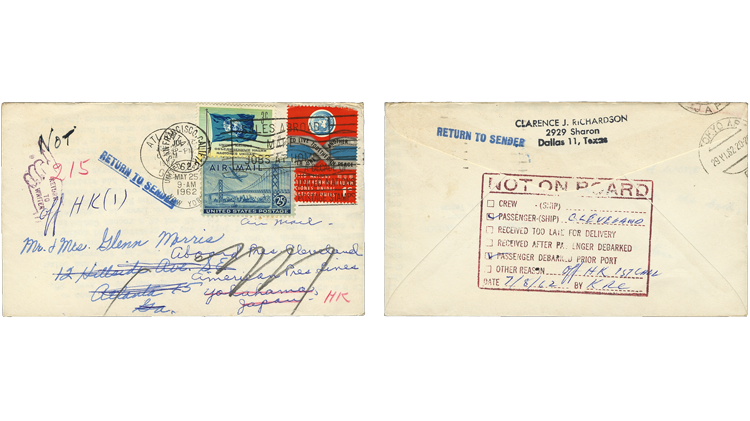 This 1962 United Nations first-day cover traveled more than 14,000 miles yet seems not to have reached its intended addressees. The 25¢ United States airmail stamp was added to pay postage to Japan, where the addressees were supposed to be aboard a cruise
Previous
Next

The United Nations cover shown front and back nearby presents several questions.

The addressees were apparently on vacation. So whoever was tending their house added a 25¢ United States airmail stamp (Scott C36), which paid the airmail rate to Asia, readdressed the cover to them “aboard the Pres. Cleveland, American President Lines, Yokohama, Japan” and remailed it on June 25.

According to the cancel on the back of the cover, it arrived in Tokyo on June 29.

It is not clear that the cover went on to Yokohama, but either there or in Tokyo, the “Not on Board” block was added on the back. It shows that the addressees had debarked from the President Cleveland at its first port call, in Hong Kong.

Thus, the letter was hand stamped “return to sender” and returned to the United States via the foreign mail office in the San Francisco post office, for forwarding (on July 27) to the original sender in Dallas, Texas.

For all its travel, a total of 14,231 miles by air (not counting a possible side-trip to Yokohama) during two months, there is no evidence that the cover ever reached the intended recipients. It remains unopened.