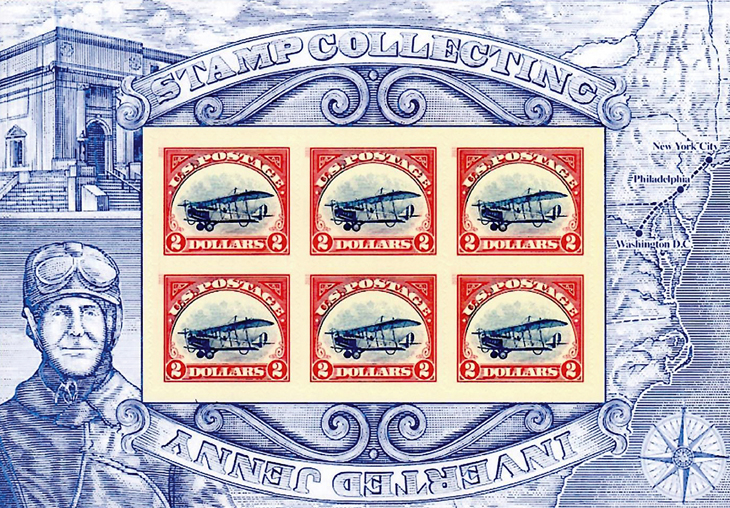 This pane of six of the upright variety of the $2 Jenny Invert pane was obtained by a collector in Oklahoma who placed a stamp order with the USPS Stamp Fulfillment Services division.

A stamp collector in Oklahoma, Steve Blair, is the latest lucky buyer of a $2 Jenny Invert pane showing the biplane in the center of all six stamps flying right side up.

As a promotional scheme, the United States Postal Service intentionally created 100 panes of the upright variety of the 2013 Jenny Invert issue (Scott 4806). Like the millions of normal stamps that show the plane flying upside down, these rare variety panes are hidden within sealed blind packaging which, from the outside, looks no different from the regular issue. The variety panes were then mixed in with the normal stamps.

Blair received his special pane in an order placed with Stamp Fulfillment Services, the Kansas City, Mo., -based mail-order division of the United States Postal Service.

“I have been ordering two or three panes every time that I send in an order for new issues,” Blair told Linn’s Stamp News. “I estimate that I have purchased 25 panes.”

Blair normally uses the $2 stamps as postage when mailing American Philatelic Society circuit books to the next collector on the APS distribution list.

Just last week, Linn’s reported that a New Jersey collector obtained an upright variety pane from the Kansas City facility. Unlike that collector, however, Blair decided to sell his find when he received an offer “that was more than I could turn down.”

Stamp dealer Henry Gitner of Middletown, N.Y., purchased the pane from Blair for an undisclosed sum. Some full panes of the upright variety have been reported selling for more than $50,000 at public auction and in private sales.

Blair notified the Postal Service of his find by calling the phone number packaged with each of the upright variety panes. He received a certificate signed by Postmaster General Megan J. Brennan identifying his find as No. 21 of 100.

Linn’s unofficial tally of 26 variety panes found also includes examples certified by philatelic grading services but not reported to the Postal Service. It also counts three panes randomly given away at the end of 2014 to three different USPS mail-order customers. That giveaway was later described by the Postal Service as not having been fully approved before it took place.

Calculating the full print fun of more than 2.2 million panes, and adjusting for panes set aside by the Postal Service for archive and merchandising purposes, the odds of purchasing one of the 100 panes printed with the intentional variety has been estimated by Linn’s to be 1 in 19,000.