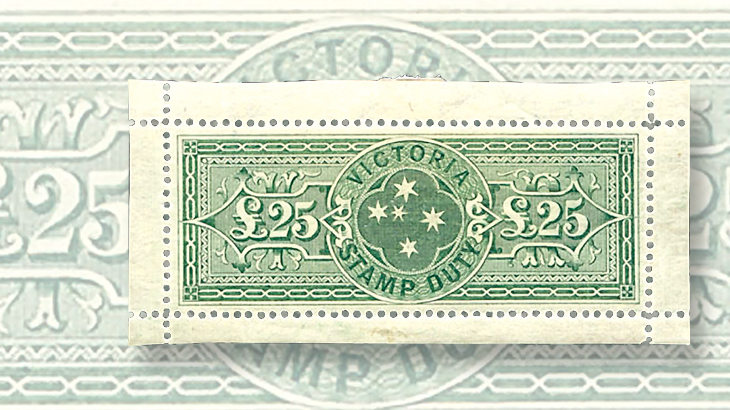 In June in Geneva, David Feldman’s offerings of Victoria, Australia, 19th-century postal-fiscal stamps greatly exceeded presale estimates. The £25 denomination was estimated to bring £4,000 and realized £48,000 (about $73,700). 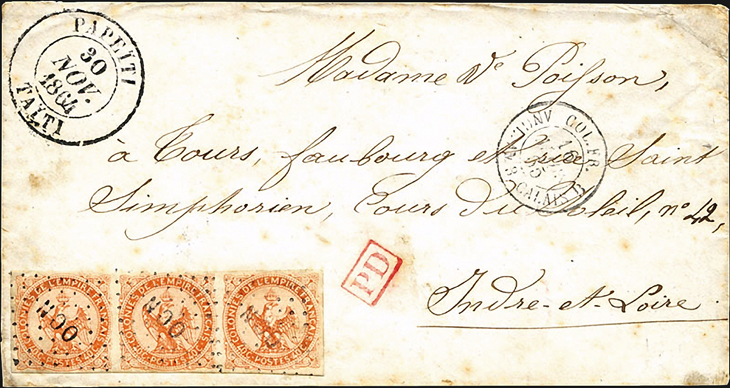 A lovely 1864 cover from Papeete, Tahiti, to Calais, France, a voyage of three and one-half months, was hammered down for about U.S. $13,900 at David Feldman’s summer sale in Geneva. 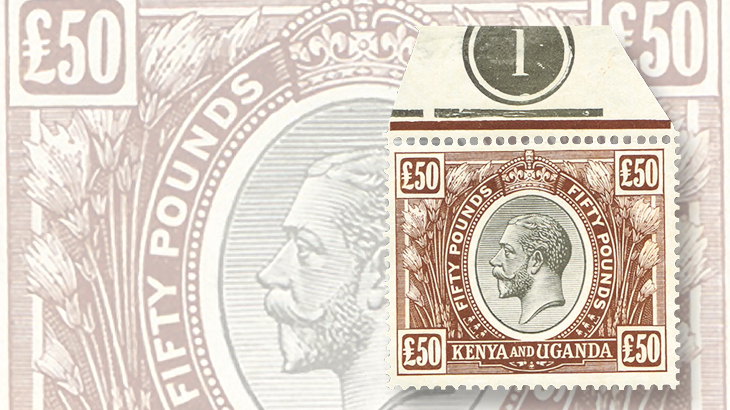 Described as a “showpiece,” this very scarce mint plate-number single of the high-value 1922 Kenya and Uganda postal fiscal sold for U.S. $86,600 at David Feldman’s June sale in Geneva.
Previous
Next

In Geneva, the firm of David Feldman held its summer auction June 22-25. The big surprise was the result obtained for a series of 19th-century revenue stamps from the Australian state of Victoria.

Three high-denomination stamps of £25, £50 and £100 – astronomical amounts in the 19th century – are listed as postal-fiscal stamps (Scott AR55-AR57) in the Scott Classic Specialized Catalogue of Stamps and Covers 1840-1940. This category includes stamps that were issued primarily for revenue purposes, although they were accepted, at least in theory, for payment of postage as well.

The three engraved stamps have selvage on all four sides, indicating that they were printed singly. Used examples, almost always with revenue cancels, are scarce, but unused examples are extremely rare. The stamps are not priced unused in either the Scott standard catalog or the Stanley Gibbons catalogs, and it is reported that the £100 value is unique in unused condition.

The ornately decorated, oblong designs are inscribed “Victoria Stamp Duty.” The £25 green stamp depicts the Southern Cross constellation in the center; the £50 violet stamp has the British coat-of-arms; and the £100 red has a rose, thistle and shamrock motif with a “VR” (Victoria Regina) monogram. They are perforated gauge 12½ and have a “V and Crown” watermark.

Other notable realizations among British Empire stamps in the Feldman sale included a mint plate-number single of the Kenya and Uganda £50 stamp of 1922 (Scott 41D). Like the postal-fiscals, this high-value stamp was used primarily for revenue purposes, but was technically also available for postage.

Very scarce in unused condition, and with the added enhancement of a sheet margin showing “1” in a circle, designating the printing plate number, the 1922 stamp was described as a “showpiece.” It sold for the equivalent of $86,600.

Among France stamps and postal history was a beautiful 1864 cover sent from Papeete on the French Polynesian island of Tahiti. It is franked with a strip of three 40-centime stamps of the Imperial Eagle type (French Colonies Scott 5), which were used in the 1850s and 1860s for all of France’s overseas holdings and outposts before separate issues began to appear for individual colonies.

The strip is tied to the cover by three strikes of a dotted-lozenge cancellation with “OCN” in the center, the abbreviation for Oceania. Markings include a dated postmark from “Papeiti/Taiti”, the contemporary French spelling of the place names, and a March 16, 1865, Calais receiving datestamp, indicating the letter took three and a half months to make the voyage to France. A small, boxed red “PD” (paye a destination) indicated to postal clerks that the letter was fully prepaid to its addressee. The cover sold for about $13,900.