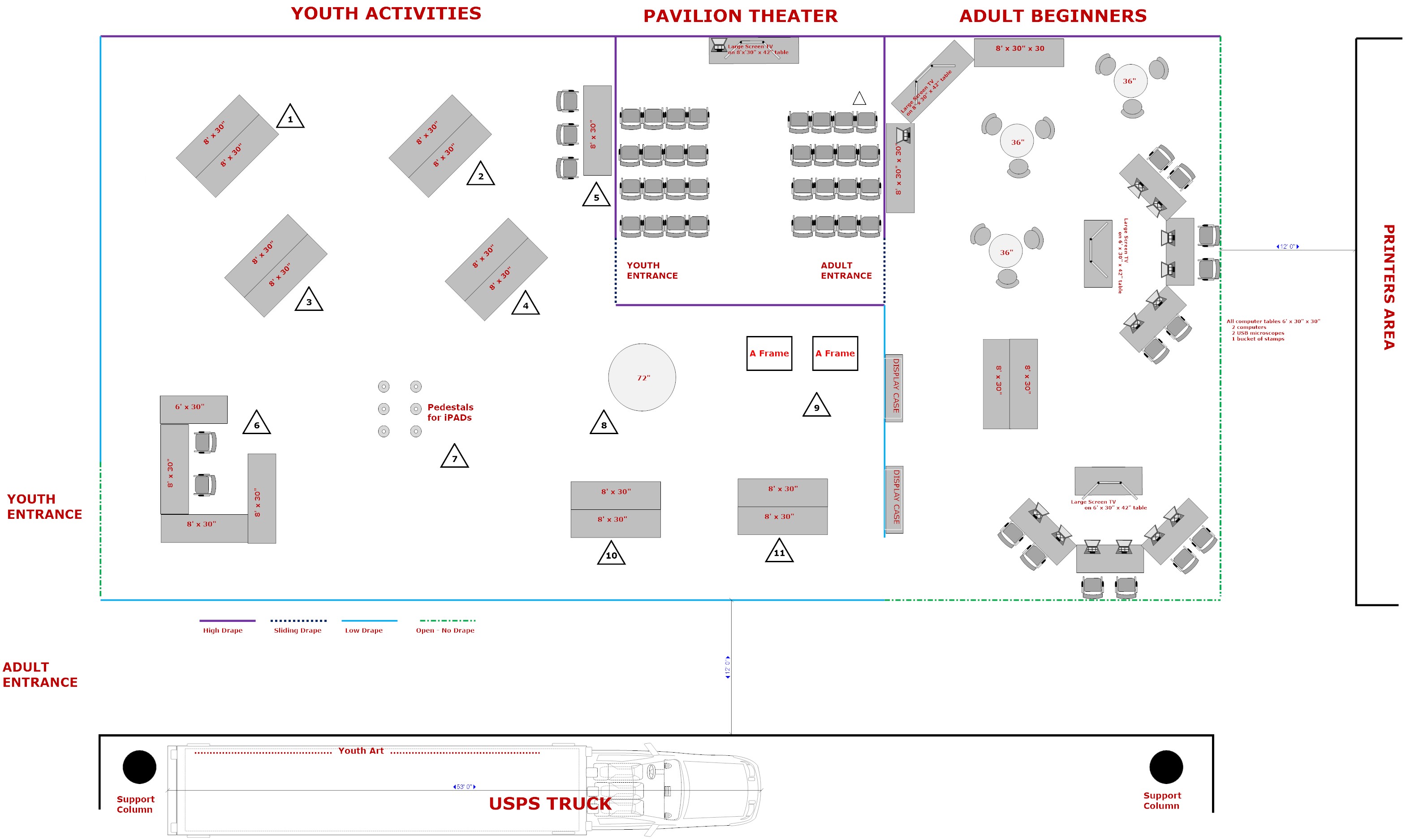 World Stamp Show — NY 2016 will feature a 5,000-square-foot area devoted to adult beginners and youth. The Welcome to Stamp Collecting Pavilion will have many interactive features and a 32-seat theater showing enticing films about stamp collecting. This f

When World Stamp Show — NY 2016 opens in the cavernous Jacob K. Javits Convention Center in New York City May 28, 2016, fully 5,000 square feet of show space will be devoted to bringing the joys, wonders and excitement of stamp collecting to young and old alike.

Dubbed the Welcome to Stamp Collecting Pavilion, the educational booth is the brainchild of the NY 2016 entry level adult and youth committee.

With dimensions of 50 feet by 100 feet, the pavilion is being touted as the biggest space ever devoted to reaching out to youth and beginning adults at a United States international stamp show.

Michael Bloom, chairman of the committee, told Linn’s that the area will have three sections: youth activities, adult beginners, and a 32-seat pavilion theater.

The Welcome to Stamp Collecting Pavilion will be next to the large United States Postal Service booth.

Bloom said the adult area is a “beefed up version” of the American Philatelic Society’s Stamp Buddy program. “We call it Stamp Buddy on steroids.”

Stamp Buddy, currently a pilot program being tested at six stamp clubs, focuses on adults “of all interests and levels of collecting,” according to the APS website.

“There will be two Stamp Buddy clusters, each consisting of tables set up for six computers, six microscopes and buckets of free stamps,” Bloom said.

Large screens connected to the microscopes will allow participants to see stamps up close. Videos promoting stamp collecting to noncollecting adults will show continuously on another screen.

Bloom said that the subjects of the videos have not been decided, but filming is expected to take place in December and January, followed by editing in February. Completion is targeted for early April.

In addition, various hobby tools will be housed in display cases. Cafe tables in the pavilion will give visitors a chance to relax.

In the youth activities area, there will be a reception area, seven activity areas, and six iPads loaded with what Bloom calls “custom programs.”

A software developer for the programs is being sought, Bloom said, and the subjects of the programs have not been determined.

Three exhibits are planned for the youth area: “Where’s Elmo?” by Janet Klug; “Penguins,” by Jean Stout; and “That’s A Postage Stamp,” by Tom Fortunato.

Fortunato is chairman of the marketing and public relations committee for the NY 2016 show. Klug, a past president of the APS and Linn’s Stamps Down Under and Stamp Collecting Basics columnist, chairs the NY 2016 social media committee. Stout is a highly respected topical exhibitor and the 2013 recipient of the American Topical Association’s Distinguished Topical Philatelist award.

For the theater, the APS “has agreed to produce new movies, one for youth and one for adult, with professional production values, to market our hobby and the APS,” said Bloom.

Also under consideration, Bloom said, are the following films: “Missing You — Letters from Wartime”; “Stamp Collecting”; “Story of Owney”; “Why Stamps Were Invented”; “Wrecks”; and “The Sun Never Sets on Mickey Mouse.”

To run the pavilion and all its moving parts smoothly, Bloom said that 20 volunteers — 10 for the adult area, and 10 for the youth section — will be required for each two-hour shift for the duration of the eight-day show, which runs from May 28 through June 4.