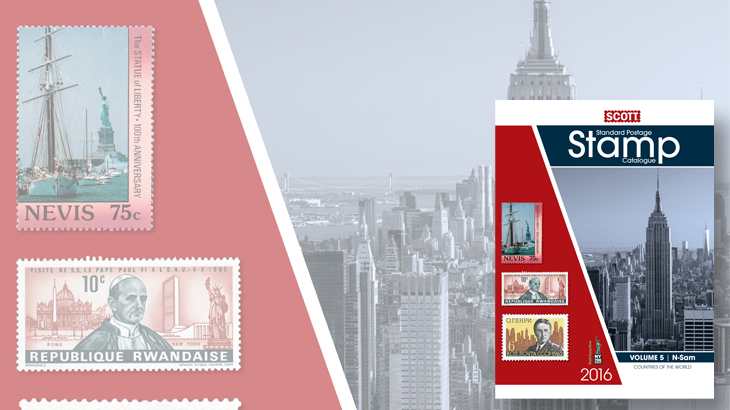 Vol. 5 of the 2016 Scott Standard Postage Stamp Catalogue yields more than 7,000 value changes among the listings for the countries of the world, N-Samoa.

Countries that garnered significant attention from the editors this year include Nepal, Nigeria, Pakistan, Romania and Russia.

A careful review of Romania resulted in just short of 1,850 value changes, the top among reviewed countries in this year’s Vol. 5. Values rose for a few scarce or hard-to-locate issues, but in general, values are down modestly. During the next few years, the Scott editors will pay close attention to more recently issued stamps of Romania and a few that date back to the 1970s, because it appears that some stocks of these stamps are being canceled to order for the packet trade. This could affect values of these stamps in the future.

More than 1,450 values were recorded for Pakistan. The value changes reflect a weakness in the market for these stamps. Most of the changes for Pakistan are decreases. However, notable jumps were seen for a few topical issues. The 2005 Mushrooms block of 10 (Scott 1071) advances from $2.75 mint and used in the 2015 edition to $7.50 both ways this year. Most stamps issued from 2010 to 2013 formerly valued at the Scott minimum of 25¢ are now valued at 60¢, both mint and used.

On a positive note, the almost 800 value changes in Nepal reflect a healthy market. Most of the changes are increases, and some of the gains are substantial. Early issues show impressive upward movement. The 1898 imperforate 1-anna Sripech and Crossed Khukris (Scott 13) soars from $12.50 unused and $6 used in 2015 to $60 both ways this year. Significant increases also are seen for some classic-period tete-beche pairs. For example, the tete-beche pair of the 1898 4a Sripech and Crossed Khukris with pin perforations (Scott 22) jumps to $900 unused and used, from just $100 both ways in the 2015 catalog.

Nigeria received a line-by-line review that resulted in slightly more than 500 value changes. A mix of increases and decreases was found, with most of the increases seen in the classic period. For example, the 1914 1-shilling King George V on blue-green paper with an olive back (Scott 8b) moves from $30 unused and $40 used in 2015 to $60 both ways this year. Among the small number of modern errors listed, the 1962 3-penny National Monument with emerald omitted (Scott 132a) advances smartly in value: from $650 mint, never-hinged and $400 used to $800 mint and $475 used.

Some of the editorial changes that were made this year include:

More than two dozen postage stamps issued by Nauru during 1975-79 and known to exist imperforate are now acknowledged and valued in footnotes accompanying the listings for the normal stamps.

New to the listings for Nicaragua include a number of sets issued during the early 1980s. The Scott editors are seeking actual stamps or scans of stamps for some of these issues to include as images in future listings.

In North Ingermanland, two new errors are added to the very brief listings of this former territory in northern Russia. Both are horizontal pairs, imperforate between. The first is for the 25-pennia Arms (Scott 3b), and the second is for the 30p Peasant (Scott 9a).

Several set, never-hinged totals have been added for Northern Rhodesia. The 1938-52 King George VI set of 21 is valued at $275. A new color-omitted error of the ½-penny Coat of Arms is newly listed as Scott 75b. This striking error is missing the orange eagle that appears at the top of the coat of arms.

In Paraguay, an imperforate error pair with center inverted of the 1922 1-peso Universal Postal Union is newly listed as Scott 244c.

Among the changes in Poland, a horizontal pair, imperforate between error of the 1944 Cracow Castle occupation semipostal has been added as Scott NB41c. It is valued at $65 mint, never-hinged and at $90 used. Both values are italicized because this error trades infrequently in the marketplace.

Dozens of new listings have been added to the early listings of Russia, through Scott 408. Included are inverted surcharges, perforation varieties and some imperforates.