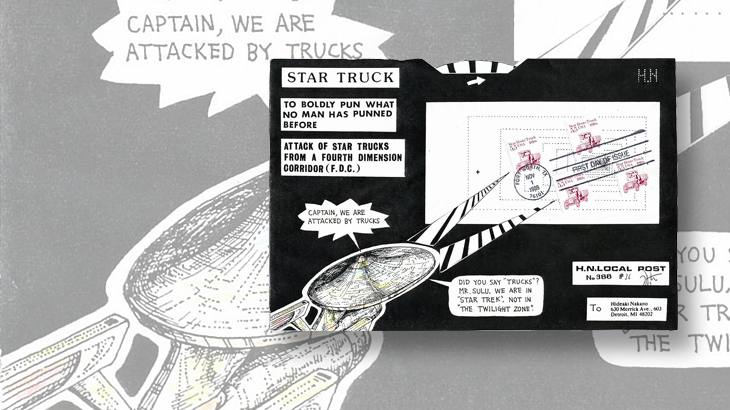 Combination first-day covers need not be serious. An off-the-wall combo cover for the United States 2016 Star Trek stamps might include the 1986 5.5¢ Star (Route) Truck stamp of the Transportation series, a punning suggestion from cachetmaker Hideaki Naka 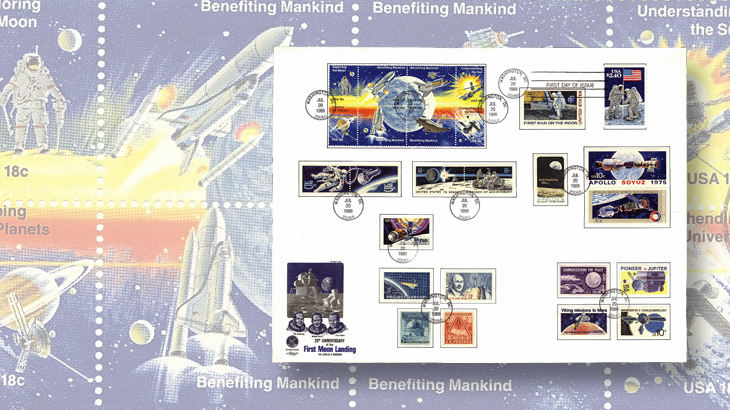 The $2.40 Moon Landing Anniversary stamp issued during World Stamp Expo 1989 in Washington, D.C., was the focal point of this oversized combo cover by Artmaster, which includes every U.S. space stamp issued to that point.
Previous
Next

This year’s United States stamp program is rife with possibilities for combination first-day covers: that is, FDCs with additional stamps related to the new issue. This article will address only some topical combinations; less popular but still doable are combinations by date or city of issue or even stamp-design artist.

The Shirley Temple forever stamp lends itself to several possibilities. The child star worked with Hattie McDaniel (Scott 3996) and Lionel Barrymore (2012) in 1935 in The Little Colonel. That is the film where Temple and Bill “Bojangles” Robinson did the famous staircase dance. There is not yet a stamp for Robinson; however, a clever cachet might tie in the Temple stamp with Scott 1750, the 13¢ Theater Dance stamp in the 1978 American Dancing set.

There are now so many stamps in the Legends of Hollywood series that making combos for new entries in the series is fairly easy.

Researching such links is made easier by Internet tools such as Wikipedia and IMDb (the Internet Movie Database).

The 2016 U.S. Flag stamp has almost too many matches among earlier U.S. stamps; combo FDC creators have an abundance of choices.

A sleep-related combo possibility for one of the new quilt issues could use the 60¢ Coverlet Eagle stamp of 2002 (Scott 3646), as a coverlet is a decorative bedcover.

Several new U.S. issues will debut at World Stamp Show-NY 2016, including a stamp marking the 250th anniversary of the repeal of the Stamp Act 1766, which has no previous U.S. issue with which to correlate for a combo FDC.

However, also to be issued at this exciting international show, the eight Views of Our Planets forever stamps and the Pluto Explored set of two forever stamps might individually be paired with some of the issues of the 1970s honoring planetary exploration and space missions, or the 1991 booklet of 29¢ Space Exploration stamps (Scott 2568-2577).

There are several varieties of the first Eid stamp, issued in 2001 (Scott 3532). It might be interesting to put one of them beside the 2016 Eid Greetings stamp so that the differences in the script text can be seen.

All of the previous U.S. Hanukkah stamps have depicted a menorah (candelabra) or dreidel (spinning toy). A combination cover for this year’s menorah design might include all earlier Hanukkah stamps, or just the earlier menorahs.

There was a 33¢ Star Trek stamp (Scott 3188e) in the Celebrate the Century 1960s sheet issued in 1999. These 15-stamp sheets often can be found at face value at some of the larger stamp shows.

In a teleconference with reporters on Dec. 29, 2015, USPS acting director of Stamp Services Mary-Anne Penner said the upcoming Jack-o’-Lanterns forever stamps will be the first Halloween-theme U.S. stamps ever issued. Maybe so, but 1974’s 10¢ Legend of Sleepy Hollow stamp (Scott 1548), commemorating one of America’s favorite Halloween stories, was issued in October with a design featuring black silhouettes against an orange full moon.

The New York Times stamp column of Sept. 15, 1974, noted that the stamps would be distributed nationwide in time for use on Halloween cards, and that the Postal Service “says that large numbers of Halloween cards are delivered every year.”

The Sleepy Hollow stamp would make a good pairing on a combo FDC with the 2016 stamps featuring carved pumpkins.

There are many earlier Madonna and Child Christmas stamps, and it’s worth noting that the 1998 stamp has a Florentine design, as does the 2016 stamp.

Savvy combo FDC servicers will want to begin looking for the necessary mint stamps now. At the moment, many can be found in dealers’ face-value boxes, but they might go up in price closer to a popular issued date.